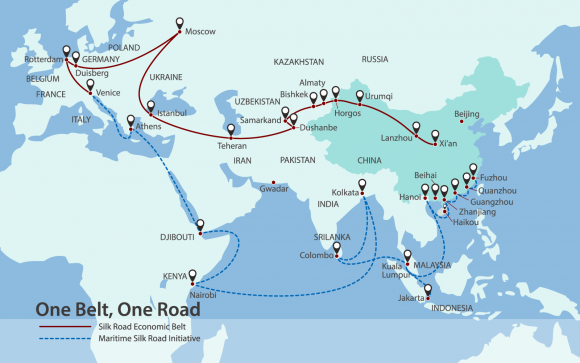 by Pepe Escobar for the Asia Times

China’s Belt and Road Initiative – the New Silk Road – will spark the country’s development and turn the dream into reality.

Now that President Xi Jinping has been duly elevated to the Chinese Communist Party pantheon in the rarified company of Mao Zedong Thought and Deng Xiaoping Theory, the world will have plenty of time to digest the meaning of “Xi Jinping Thought on Socialism with Chinese Characteristics for a New Era.”

Xi himself, in his 3½-hour speech at the start of the 19th Party Congress, pointed to a rather simplified “socialist democracy” – extolling its virtues as the only counter-model to Western liberal democracy. Economically, the debate remains open on whether this walks and talks more like “neoliberalism with Chinese characteristics”.

All the milestones for China in the immediate future have been set.

Xi himself, since 2013, has encapsulated the process in one mantra; the “Chinese dream”. The dream must become reality in a little over three decades. The inexorable modernization drive unleashed by Deng’s reforms has lasted a little less than four decades. Recent history tell us there’s no reason to believe phase 2 of this seismic Sino-Renaissance won’t be fulfilled.

He mentioned only briefly the New Silk Roads, a.k.a. Belt and Road Initiative (BRI) as having “created a favorable environment for the country’s overall development”. He didn’t dwell on BRI’s ambition and extraordinary scope, as he does in every major international summit as well as in Davos earlier this year.

But still it was implicit that to arrive at what Xi defines as a “community of common destiny for mankind”, BRI is China’s ultimate tool. BRI, a geopolitical/geoeconomic game-changer, is in fact Xi’s – and China’s – organizing foreign policy concept and driver up to 2050.

Xi has clearly understood that global leadership implies being a top provider, mostly to the global South, of connectivity, infrastructure financing, comprehensive technical assistance, construction hardware and myriad other trappings of “modernization”.

It does not hurt that this trade/commerce/investment onslaught helps to internationalize the yuan.

It’s easy to forget that BRI, an unparalleled multinational connectivity drive set to economically link all points Asia to Europe and Africa, was announced only three years ago, in Astana (Central Asia) and Jakarta (Southeast Asia).

Have BRI, will travel

It starts with Hong Kong. When Xi said, “We will continue to support Hong Kong and Macau in integrating their own development into the overall development of the country”, he meant Hong Kong configured as a major BRI financing hub – its new role after a recent past of business facilitator between China and the West.

Hong Kong’s got what it takes; convertible currency; total capital mobility; rule of law; no tax on interest, dividends and capital gains; total access to China’s capital market/savings; and last but not least, Beijing’s support.

The integration of the Greater Bay Area is bound to inspire, fuel, and in some cases even mould some of BRI’s key projects. The Eurasian Land Bridge from Xinjiang to Western Russia (China and Kazakhstan are actively turbo-charging their joint free trade zone at Khorgos). The China-Mongolia-Russia economic corridor. The connection of the Central Asian “stans” to West Asia – Iran and Turkey. The China-Pakistan Economic Corridor (CPEC) from Xinjiang all the way to Gwadar in the Arabian Sea – capable of sparking an “economic revolution” according to Islamabad. The China-Indochina corridor from Kunming to Singapore. The Bangladesh-China-India-Myanmar (BCIM) corridor (assuming India does not boycott it). The Maritime Silk Road from coastal southeast China all the way to the Mediterranean, from Piraeus to Venice.

Yiwu-London freight trains, Shanghai-Tehran freight trains, the Turkmenistan to Xinjiang gas pipeline – these are all facts on the ground. Along the way, the technologies and tools of infrastructure connectivity – applied to high-speed rail networks, power plants, solar farms, motorways, bridges, ports, pipelines – will be closely linked with financing by the Asia Infrastructure Investment Bank (AIIB) and the security-economic cooperation imperatives of the Shanghai Cooperation Organization (SCO) to build the new Eurasia from Shanghai to Rotterdam. Or, to evoke Vladimir Putin’s original vision, even before BRI was launched, “from Lisbon to Vladivostok”.

Xi did not spell it out, but Beijing will do everything to stay as independent as possible from the Western Central Bank system, with the Bank of International Settlements (BIS) to be avoided in as many trade deals as possible to the benefit of yuan-based transactions or outright barter. The petrodollar will be increasingly bypassed (it’s already happening between China and Iran, and Beijing sooner rather than later will demand it from Saudi Arabia.)

The end result, by 2050, will be, barring inevitable, complex glitches, an integrated market of 4.5 billion people mostly using local currencies for bilateral and multilateral trade, or a basket of currencies (yuan-ruble-rial-yen-rupee).

Xi has laid China’s cards – as well as the road map – on the table. As far as the Chinese Dream is concerned, it’s now clear; Have BRI, Will Travel.

The Essential Saker: from the trenches of the emerging multipolar world