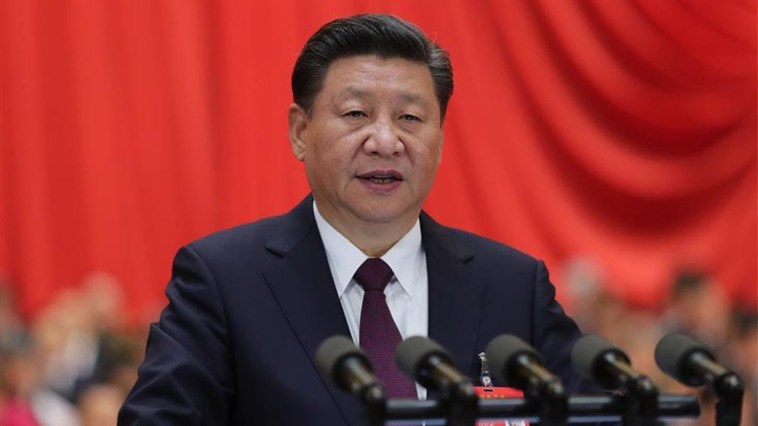 While enduring such a lengthy speech is not particularly easy, in hindsight, Xi’s speech represents a markedly succinct summary of China’s contemporary achievements while offering an easily understood road-map for China and indeed her partners, for the remainder of the 21st century. When trying to condense and synthesise over 100 aggregate years of past successes and future planning, listening to three and an half hours of a speech is actually far briefer than the copious policy documents and analysis that one might otherwise have to read in order to garner such essential information.

Because of this, many western mainstream media outlets have decided to hide the full speech, blaming its length for the fact that in reality, many such “journalists” do not wish to confront China’s rise to its position as a foremost superpower in the modern world.

Here, you can watch the full speech. Below the video I shall illustrate what I felt were the most important points:

Xi Jinping’s address was framed by the theme of his Presidency: the further development of Marxism with Chinese characteristics. This essentially means embracing traditional Chinese cultural and socio-economic habits within the context of the market socialist economic pioneered by Deng Xiaoping who was Chin’a paramount leader from 1978-1989.

The most revolutionary aspect of the speech included a commitment to build on China’s industrial, infrastructural and financial progress to make China an ever more prosperous country internally. While words like “luxury” still carry some stigma in the context of a Communist Party, in reality, Xi was promising just that.

As Chinese workers have laboured tirelessly to transform China from a struggling agrarian economy to a thriving economy that will soon fully overtake the US in terms of total economic power (in many other areas, China has overtaken the US some time ago), Xi illustrated that now it is the time for Chinese men and women to enjoy more of the benefits of the wealth they created.

To achieve this, Xi spoke of several stages of developing “great modern socialism”, the natural outgrowth from the market socialism of Deng.

Practically, this will require two things. First of all, One Belt–One Road will help to connect the Chinese model of economic growth with other dynamic and growing economies throughout multiple global regions. The outward looking concept behind One Belt–One Road is critical to Xi’s idea of a China that will be not only open but more open than ever before. By sharing the Chinese experience with others and linking economies of the world, China is creating a world in which developing countries can enhance their productivity while crucially maintaining full political independence. Secondly, Xi has a wide ranging programme designed to pivot China’s internal investment from primarily infrastructure based projects to projects which improve the micro-management of daily life. In many ways, such programmes at an urban level, are already well under way.

China’s reticence to intervene in the political issues of foreign countries was in fact a recurring theme of Xi’s speech. This was designed to reassure China’s new partners, but it also is part of a wider declaration that in the Chinese dominated 21st century, this will be an organic economic dominance and a dominance in terms of available resources, but not one of imperialistic, political nor ideological dominance. In many ways, there is no better place to assure partners of China’s lack of interest in exporting ideology than during a Communist Party Congress. In this sense, it was made clear that China’s ideological dialectics are meant only for China and not partners. In a single phrase, one could summarise this as: “Great modern socialism in one-state and One Belt–One Road for all independent partners”. To put it another way, “Many political systems, one common goal of prosperity”.

Between the present day and the year 2020, China will work to solidify economic and social gains for the last decade, something which will be capped-off by the completion of the modernisation project for the People’s Liberation Army in 2020, as well as enhanced efforts to totally eliminate rural poverty and expand modern agriculture and industrial sectors outside of China’s modern urban regions.

Between 2020 and 2035, China will work to build a country that is “prosperous, strong, democratic, culturally advanced, harmonious, and beautiful”. In more practical terms, this means a country wherein real Chinese living standards continue to increase, while conditions remain free of the peaks and troughs that have plagued western societies in recent decades.

While capitalists often criticise socialist countries for lacking sufficient luxury items and leisurely pursuits for citizens and where inversely many socialists criticise capitalist countries for making culture inaccessible and stable living impossible, Xi’s  programme looks to offer both stability, consistently liveable residential and working environments, while also enhancing the ability of ordinary people to enrich their lives with cultural activities and the new avenues of social enhancement made possible through modern technologies which China has both braced and pioneered.

In this sense, China is preparing for an economic and social reality in the age of industrial mechanisation. Where many western entrepreneurs such as Elon Musk have advocated a standard “living wage” for citizens, in order to cope with increased mechanisation,  Xi’s proposals effectively guarantee the shared and even distribution of China’s immense wealth through a programme of direct investment into people and their social environments. In this sense, rather than pay citizens an arbitrary wage, China after 2035, will move increasingly to develop a society where wealth is transferred across society in form of manifold investments, something that will be enacted harmoniously with the coming age of  mega-mechanisation.

Part of Xi’s proposals to enhance the quality of living for Chinese, is to take care to always balance infrastructural development with ecological protections. As the country which industrialised more rapidly than any other in history, China has already begun embracing green technology, particularly in the field of energy creation, more thoroughly than any other. As China begins exporting its green technologies, Beijing will almost certainly become a global leader in this field.

Xi Jinping also spoke of the need to further assure that corruption will not implant itself in China, in spite of economic diversification and growth. He encouraged the party faithful to remain committed to traditional values while preparing the development of new ways of thinking and problem solving.

When taken at face value, all of Xi’s proposals are impressive. It would be difficult for anyone other than an ideologue to disagree with the over all scope of his lengthy speech.

Therefore, the biggest question remaining is: will China be able to accomplish these great feats?

The simple answer, based on China’s modern precedent, is a resounding, YES.

What remains for China is to merely build on these foundations which have been laid at a phenomenal speed, especially when one considers China’s large population and land mass.

Because all of Xi’s proposals involve a combination of internal investment, external partnerships which include new multilateral investment opportunities as well as a commitment to peace, the only way for China’s record of progress to become disrupted is through the intervention of a foreign entity.

While it is clear that the US intends to disrupt China’s external development through One Belt–One Road, what is also clear is that the unmistakable US attempts to do this, have traditionally ended in failure. Washington’s pivot to India, a clear attempt to scuttle the Sino-Pakistan alliance, has become a public embarrassment as the US is somewhat diplomatically distancing itself from New Dheli after it became clear that India does not think leaping into America’s Afghan disaster is prudent. This further limits India’s long term options, if New Delhi fails to join Russia and Pakistan along One Belt–One Road. Although, the US came out with some highly pro-Indian statements on the same day as Xi’s speech, the timing and nature of the remarks indicate that it may be more of a last gasp of a dead-end policy than a full revitalisation.

In terms of South East Asia, the prolonged crises in Myanmar appears as though it is being managed internally. The danger is that the US could still internationalise the conflicts in Myanmar, in the hopes of creating a roadblock to China’s partnerships in South East Asia. Elsewhere, in South East Asia though, Philippines may soon became a joint success story for both Manila and Beijing as early this year Xi Jinping hailed a “golden era” of relations between the former US colony and China, something made possible by President Rodrigo Duterte’s pivot away from Washington and closer to both China and Russia. China is also set to build a large new district in  Manila, which will act as a modern showcase for Philippines in the 21st century and beyond.

In terms of the Middle East, while the US has caused major devastation, there are now more countries willing and able to work with China than ever before. This includes countries as diverse as Iran and Saudi Arabia, Qatar and Egypt, Lebanon and Iraq, Syria and Turkey.

China’s recent opening of a military logistics base in Djibouti ,also looks to secure future partnerships in Africa. Furthermore, China’s warm relationship with Russia, means that two of the three world superpowers are on the same page, something which is entirely unlike the Cold War period when the USSR, China and the US had three very different agendas, each of which allowed a third party to exploit the other two.

Overall, the prognosis for Xi Jinping and his successors being able to deliver on the monumental promises made in today’s speech, seem surprisingly doable. China has shown the world that it can make the difficult happen with speeds that shock many sceptics and with an exactitude that confounds students or previous rising economic giants.

In this sense, it is not at all beyond the scope of reality that a 3.5 hour speech, may shape the next 100 years of Chinese and world history.