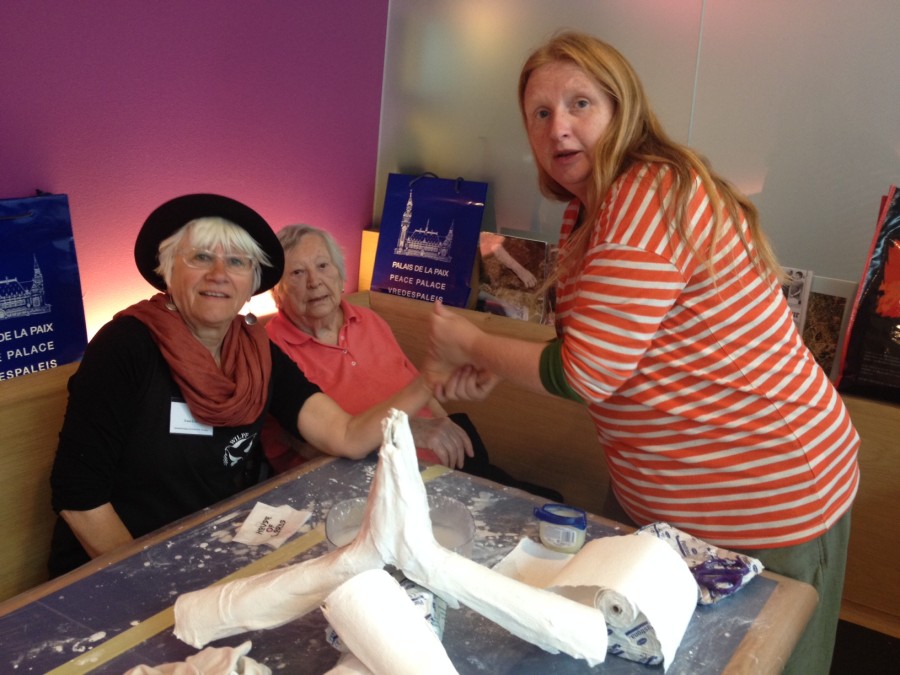 Sunday, April, 26th the Peace Palace at Carnegie Plein in The Hague is filled with a crowd of women from all corners of the world. Beautifully dressed, old and young ones, assemble to unveil the bust of Aletta Jacobs, first female medical doctor, dedicated citizen and organizer. After 100 years of growing violent conflict, women have come to the Hague back to commemorate a century of efforts to end all wars and to establish peace and justice. They have come to commemorate women like Aletta Jabobs and her compatriots who have opened paths and developed tools for peaceful conflict solutions among nations. More than 900 women from 80 countries have travelled to the dutch metropole on the North Sea. Will the be able to make a difference?

Representing all continents some came to renew their efforts in the quest for peace. From around the world these women wanted to unite their voices and to help save the planet from the scourge of war. Like their ancestors from war ridden nineteenhundredfifteen women sincerely dedicated to peace have had to overcome barriers, borders and prejudices. Some had to struggle hard in order to find funds for the journey. They all invested creative energy in order to be able to  participate in a six days event named „Women’s Power to Stop War“. In plenary and special sessions at the prestigeous premises of the World Forum of The Hague they would look at the most burning issues of the day from a women’s perspective. Most of them did not take notice that Mr. Obama as well as Hillary Clinton were her before.

Welcoming citizens of the Hague, the spring blossoms of a flourishing dutch metropol and the most beautiful museums of the city offered space to relax and to forget in what state of affairs the world is in today.

In an opening ceremony the Irish Nobel Peace prize laureate Mairead Maguire denounced the ongoing demonizing and dehumanizing of elected political leaders of other countries. She recalled Bertha von Suttner and urged again „Lay Down Your Arms“. Maguire reminded her audience that „Peace is a Human Right“ and that waring governments needed to be confronted with this demand of the day. Referring to the UN and Nobel Charter and to Eleonor Roosevelt who had helped establish the Universal Declaration of Human Rights, the nobel laureate advocated strongly: Respect International Law and redress ethical and moral values! Her co-laureates  Shirin Ebadi (2003), Leymah Gbowee (2011), Jody Williams (1997) were in the audience, listening.

US journalist Amy Goodman of „Democracy Now“ and her German colleague Sabine Schiffer from the „Institute for Media Responsibility“ set another example in pleading  for independent media, media free from corporate interests. Such media should allow for investigative journalism and enable the quest for truth. Independent media were most needed in the struggle against vested interests and especially in times of war, they  said.

93 year old Edith Ballantyne, UN-adviser of the oldest women’s peace organisation urged to renew the strive for an alternative economic system, free from the bondage of profit making. She encouraged the younger generation to study the root causes of warfare, if they wanted to help abolish a world without military conflict, war and violence against women. Would the young staff women listen?

At the turn of the nineteenth century Bertha von Suttner, the Austrian duchess had vociferously pleaded for peaceful conflict settlement, long before the Great War had started. As an early woman peace maker she had convinced her former boss, Alfred Nobel to donate his profits from producing explosives to the foundation of the NOBEL PEACE PRIZE. She was the first woman to receive it in 1905. Are todays nobel peace price winners devoted to the  cause?

Fore-Mothers for Peace and Justice

Since April 26th in 2015 Aletta Jacobs ’s bust duly stands next to Ms Suttner’s at the Hague’s Peace Palace. Whereas Bertha had died in June 1914, just before the beginning of World War I, Dr. Aletta Jacobs, Jane Addams, US-American social worker, Emily Green Balch, professor of economics at Wellesley College, Anita Augspurg, first German scholar in Law, Lida Gustava Heymann, Gertrud Baer, Rosika Schwimmer and some more outstanding 1 300 women from warrior countries had joined hands in the Hague in April 1915 to help stop the war machine then. Are todays „feminists“ prepared to do the same?

During the small period between the two global slaughters of the last century some of early suffragettes from the Hague  had founded the Women’s International League for Peace and Freedom (WILPF)  in Zürich.

Jane Addams, their first president, was awarded the Nobel Peace Prize in 1935. Emily Green Balch, general secretary for a while, received the price in 1946. Most  Wilpfers,  however, had been victimized by World War II . Many lost their homes, their families, their fortunes, some their health and others their lives in the struggle for peace and against fascism. Some survived under difficult circumstances.

In the fifties of the last centuries WILPF survivors and newcomers to the organization resisted the Witch Hunt of the McCarthy period in the USA. They denounced the atomic bomb and cold war policies. In Germany women like Magda Hoppstock-Huth and Ruth Gleisberg spoke out bravely against the re-militarization of their country, forced upon them by the US victor. In the United  States Wilpf women developed a „Women’s Budget“, focused on the needs of the cities not the Pentagon’s. Over the decades WILPFERs collected millions of signatures in order to STOP THE ARMS RACE, they lobbied their politicians, they organized marches and civil disobedience. They sent delegations to theaters of war and they initiated diplomatic campaigns. The spirit of these women peace activists is still around, but how influential?

Disquieting concerns about even more confrontative and desasterous war policies had mobilized women to The Hague again. Women from everywhere came motivated to put an end to the war machine. Some came to offer their expertise, acquired in life long struggle, to help stop the waste of natural and human ressources and  to raise their voices against the ongoing slaughtering sustained by private war machines and by some governments.

Women still strive to help stop the brutality and the violence bread by such monsters. They want the funding of the war machine to be halted and they still want  funds redirected for social needs. They want  the environment saved and the beauty of this planet be upkept. They care for a fairer distribution of wealth so that everybody will have access to clean water, healthy food and medical care. Women from the Global south pleaded that giving birth should be a pleasure not a plague ending in a violent death.

As academics, as artists, mothers, lawyers, politicians and as peace activists many women took the floor in the World Forum. Women gave first hand witness to what it means being a victim of militarized conflict. Hanan Awwad from WILPF-Palestine reminded the audience of the courage  Palestian people still have to resist occupation, house demolishing and ongoing war against them. She reminded the audience that brave Palestinian women still suffer in Israeli prisons , all setting an example of strength and courage to world. Women from the revatilized Israeli section spoke about their joint efforts with Arab and Palestine women through Machsom Watch, documenting Israeli human rights violations at the checkpoints. Others like Jody Williams from the Campaing to ban landmines spoke out against drone warfare and against the development of  killer robots.

Resolutions were passed in support of the MINSK II Peace Agreement and demands forwarded to stop the war against Yemen, to end the blockade and to deliver human aid to this war torn country.

The Arab Spring was not referred to as a progressive event.

The need to upkeep the established links and to strengthen international networking of women was generally felt and often expressed. Hands were stretched out between North and South, between East and West in order to help develop counter-balances to the war machinery on a communal, a national and an international level. Hopes were expressed that it would not take another hundreds years before a more peaceful world be established.

As long as there is life on earth, as long as there are women, prepared to give birth to new life, humanity has chance to survive – but more bravery is needed to speak out truth to power.

Those bearing responsibilities for the war machine need to be pointed out and denounced for their wrong doing.

Voices  at Congress were moderate and balanced and not naming the names of those responsible for conflict.