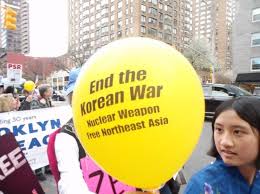 2015 is the year to celebrate women peacemakers: the 100th anniversary of the International Congress of Women, when over 1000 wilpf foundingwomen came together in the Hague amidst the horrors of World War I to call for an end to militarism—and founded the Women’s International League for Peace and Freedom, which this week has again assembled women peacemakers from every continent to celebrate women’s campaigns for peaceful, negotiated solutions to conflicts around the world.

At the Hague celebration are Nobel Peace Prize Laureates who led movements of women to bring peace to their countries – Maired Corrigan Maguire in Northern Ireland and Leymah Gbowee in Liberia.

This month Maguire and Gbowee are joining women from North and South Korea to march across the minefields that divide the Korean peninsula to call for a permanent Korean War peace treaty, the absence of which has been a key obstacle to ending military tensions.

Maguire explains, “We find it hard to imagine the pain of separation still felt by Korean families who Maired Maguirecannot travel an hour up the road, through the DMZ, to visit their families… With its barbed wire, armed soldiers and thousands of explosive landmines, the DMZ remains a tragic manifestation of how much the Korean people have suffered and lost from war.”Is The DMZ About to Get Hot?
Marchers are coming from 12 different countries. It is especially important that American women peacemakers are prominently involved in this march because it was the US that unilaterally divided the Korean peninsula at the end of the World War II, with the Soviet Union’s later agreement.

The lead organizer is Korean-American Christine Ahn, co-founder of Women De-militarize the Zone. Ahn explains the reason for the walk: “The unresolved Korean conflict gives all governments in the region justification to further militarize and prepare for war, depriving funds for schools, hospitals, and the welfare of the people and the environment. That’s why women are walking for peace, to reunite christine ahnfamilies, and end the state of war in Korea.”

Other marchers from the US will include: feminist writer Gloria Steinem who has pointed out that even the US Army War College has said “the only way to prevent the outbreak of catastrophic confrontation is to reach an agreement on ending the armistice from the Korean War, in essence a peace agreement, and give a formal security guarantee to North Korea tied to nonproliferation – in other words – it is talking”. American activists Medea Benjamin co-founder of Code Pink, and Cora Weiss, President of the global Hague Appeal for Peace, will also be walking.
The US committed at the end of the Korean War to sign a permanent peace treaty within 3 months – but has never has acted on that commitment. The US continues to maintain over 28,000 US troops on North Korea’s border and each year carries out provocative US-South Korean military exercises, keeping tensions high.

I can report firsthand from meeting in 1980 with Kim Young Nam, then the North Korean Foreign Minister, that negotiating a peace treaty was his first suggestion for improving relations with Washington and subsequently with South Korea. Sadly, the US has continued to prioritize keeping its forces on the Asian mainland over Koreans’ desires for ending the barriers which have separated families and led to constant military tension.

The walk is planned for May 24th, the International Women’s Day for Peace and Disarmament. Organizers report that first North Korea and then South Korea have given conditional approval for the walk. Ahn explains the group plans also “to hold international peace symposiums in Pyongyang and Seoul where we can listen to Korean women and share our experiences and ideas of mobilizing women to bring an end to violence conflict.”

Some friends of ours will be making a film about the march, Crossings, which can be supported through Kickstarter at http://kck.st/1K6wWQ1.

Last weekend I was in New York City for the demonstration at the time Koreans in nyc balloonof the UN’s nuclear disarmament talks. I loved seeing the Korean women marching for peace. Bravo for all these women peacemakers! Here in the Capital District, we in Women Against War take hope from these commitments of women across the world.