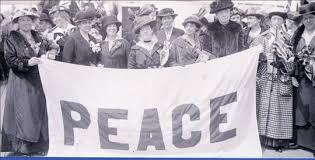 Condemn the bombing and blockading of Yemen by a coalition of ten countries, the latest destabilising attack in the Middle East and North Africa region, following death and destruction in Gaza, Syria, Libya, Bahrain, Mali, Sudan, Somalia, Pakistan, Iraq, and Afghanistan;

Condemn the use of explosive weapons in populated areas in Yemen, which causes severe harm to individuals and communities and furthers suffering by damaging vital infrastructure;

Believe that while waged under the pretext of fighting “terrorism” or the so-called “responsibility to protect” these wars are motivated for access to resources and strategic power.

See that such wars leave behind destabilized and failed states and devastated societies;

Call for an immediate, unconditional ceasefire and urgent development assistance to strengthen the
sovereignty and self-government of Yemen;

Express concern with ongoing tension between Russia, Ukraine, and the Eastern European region, which is exacerbated and provoked by NATO military exercises and proposed expansion;

Express alarm with aggressive and violent language that demonises leaders and sabotages dialogue and the building of diplomatic relations;

Condemn the use of explosive weapons in populated areas by all parties in the Ukraine conflict, which has killed hundreds of civilians and prevented the provision of food, water, medicine, and shelter to civilians;

Call on states to cease arms transfers to all parties involved in the conflict in Ukraine;

Demand the full implementation of the Minsk II ceasefire, disarmament, and dialogue agreement of February 2015 negotiated between the Ukraine, Russia, France, and Germany and overseen by the Organisation for Security and Cooperation in Europe.