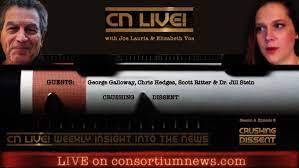 Join us Friday at 10 am EDT, 3 pm BST as we examine the information warfare being waged to enforce a single narrative about the war in Ukraine.

It may be worse than McCarthyism, which was defeated by its own excesses. Today’s information war against individuals and media who do not adhere to the Western-government-enforced narrative on Ukraine is part of a long history in the U.S. of officially crushing dissent. With the advances of technology for both surveillance and censorship, we might be in the most chilling atmosphere yet for thought control. Will it too be brought down by its own excesses?

As Consortium News has argued, the U.S. and NATO needed and helped facilitate the invasion of Ukraine to launch its economic war against Russia but also its information war against domestic dissent.  Our guests have been targets of censorship and smears in this coordinated assault on freedom of expression. Join us Friday with George Galloway, Chris Hedges, Scott Ritter and Jill Stein, co-hosted by Elizabeth Vos and Joe Lauria and produced by Cathy Vogan.