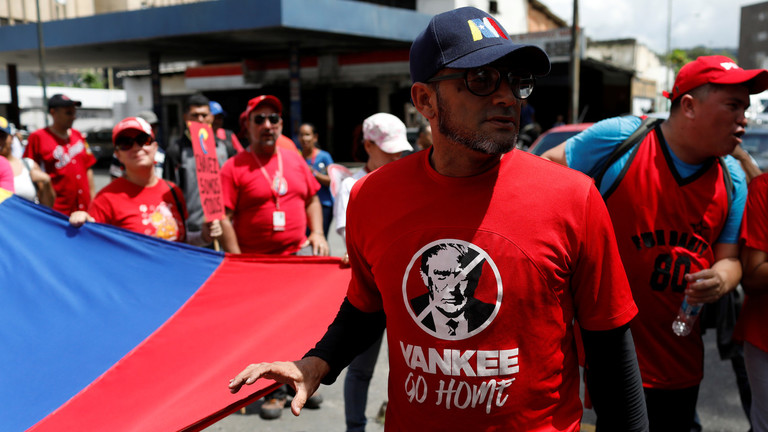 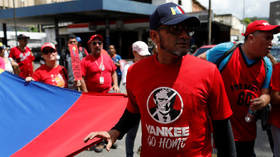 A rally in support of Venezuela’s President Nicolas Maduro in Caracas, Venezuela October 5, 2018 © REUTERS/Marco Bello
The dramatic events in Venezuela have “US-orchestrated coup d’état” written all over them. Washington is also giving itself license for military intervention which could spark a proxy war involving Russia.

The sequencing leaves no doubt the US has upped the ante for regime change in the South American country.

This week, Vice President Mike Pence issued a call to arms with a deft video address to the “people of Venezuela” to take to the streets against the elected government. Pence also urged the country’s security forces to back the protests, adding, “we [the US] are with you.”

Next day, the opposition figure Juan Guaido holds a major rally in the capital Caracas and declares himself “interim president of Venezuela” while denouncing incumbent Nicolas Maduro as “a usurper.” 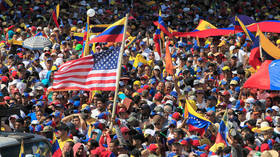 US interfering in Venezuela? No need to ask Mueller to determine that – Lavrov

Within minutes, US President Trump announces he is recognizing Guaido as the legitimate authority in Venezuela. Trump’s imprimatur is swiftly followed by Canada and several right-wing South American governments allied with Washington. French President Emmanuel Macron says he supports “the restoration of democracy” in Venezuela and salutes “the courage of the hundreds of thousands of Venezuelans marching for their freedom”.

President Maduro responds by cutting off diplomatic ties with the US and orders American diplomats to leave within 72 hours.

Then, following the script, US Secretary of State Mike Pompeo warns – with classic Alice-in-Wonderland logic – that since Maduro is no longer the legitimate president he has no authority to sever diplomatic ties with Washington.

More sinisterly, Trump and Pompeo make the time-dishonored threat that “all options are on the table” – meaning military action – “if US personnel are endangered.”

That means the Maduro government is forbidden from sanctioning US diplomatic properties and officials. Any move to expel American personnel could be construed as “endangering” their safety, which in Washington’s logic means a license to “respond” militarily.

Washington’s self-declared license to protect its interests in Venezuela extends to the anti-Maduro opposition groups. Trump warned he would hold Maduro responsible for any acts of violence against protesters.

This amounts to incitement for more violence on the streets of Caracas. 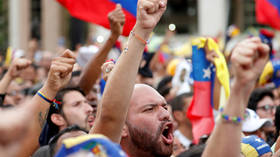 Act of gangsterism against Venezuela: Trump, Pence, Pompeo star in the Pirates of the Caribbean

Venezuela’s armed forces – who so far remain loyal to Maduro – have also been accused of using excessive lethal force.

The situation is therefore primed by Washington for escalation into a civil war.

Russia has condemned the interference by the US in Venezuela’s internal affairs, saying that President Maduro is the legitimate head of state. Moscow has also warned the US not to deploy military force to the country which Russia describes as “our ally.”

Right-wing governments in the region such as Colombia and the newly elected Brazilian President Jair Bolsonaro, as well as Argentina, Chile, Paraguay and Peru, have backed Washington’s stance on delegitimizing Maduro’s administration. Colombia and Brazil have also shown preparedness to support US military intervention.

In addition to Russia’s condemnation of US interference, China, Bolivia, Cuba, Turkey and Iran, among others, have given their support for the Maduro government, denouncing Washington’s policy of regime change.

Thus, the Trump administration is not only igniting a firestorm within Venezuela, it is setting the stage for an international proxy war, not unlike the war which Washington and its allies engineered in Syria.

An American-induced war in Venezuela has been a long time in the making. Ever since the South American oil giant opted for a socialist government more than 20 years ago – first under Hugo Chavez then under his successor Nicolas Maduro – Venezuela has been in Washington’s cross-hairs for regime.

The GW Bush administration triggered a coup in 2002 against Chavez, which failed. Then Obama tightened the screws with economic sanctions on Venezuela’s vital oil industry which precipitated the country’s current social crisis and discontent. Several waves of streets protests have occurred all with the signs that Washington has been a crucial instigating player.

ALSO ON RT.COMVenezuela divide: Turkey, Russia, China stand against Washington, its Latin America allies At the end of last year, the Trump administration slated the Maduro government as a national security threat, and hinted it was considering military action against Venezuela. There were even White House claims that Caracas was agitating the regime caravans through Central America, which have become a bane of Trump’s fears about immigrants “invading” the US.

But what triggered the latest push from Washington may have been Russia’s more open alliance with Caracas. Last month, President Maduro was hosted in Moscow by Russia’s Vladimir Putin, when the two countries signed multi-billion-dollar partnerships for oil exploration, mining, agricultural and other trade ties.

Within days of Maduro’s visit to the Kremlin, the “strategic alliance” was given a decisive military underpinning when two Russian Tupolev Tu-160 nuclear-capable bombers flew 10,000 kilometers to Venezuela in an apparent show of Moscow’s support for the beleaguered country.

Washington’s reaction to the Russian bombers landing in Caracas was apoplectic.

Maduro was elected for the second time back in May 2018 with nearly 67 per cent of the vote. Admittedly, the turnout for the election was low at around 46 per cent. The large abstention was partly due to the ongoing economic crisis and unrest in the country, which Washington’s sanctions have played a large part in fomenting.

Nevertheless, more than 9 million Venezuelans voted for Maduro and his socialist policies. The elections were documented as free and fair by international observers. They were also verified by Venezuela’s National Electoral Commission. 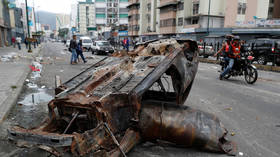 Earlier this month, on January 10, Maduro was officially inaugurated for a second term that runs until 2025.

Given his consolidation of authority and the important alliance with Russia taking on international prominence, it seems that Washington decided to renew its efforts for regime change in Caracas.

What happens next is a high-wire act. Washington could ramp up the economic blockade of Venezuela by freezing financial assets of the country’s oil company in the US. The US could even impose a naval blockade. And if the violence escalates in Venezuela, Washington has already set the precedent for military intervention.

How Russia and Venezuela’s regional allies respond to that is a potential detonator of wider conflict.

What’s all the more inflammatory is the flagrant illegality of Washington’s actions. The opposition figure whom the White House has anointed as “acting president” and the minor congressional body he controls have been declared in contempt of the constitution by Venezuela’s supreme court.

Juan Guaido therefore has no mandate or legitimacy to appoint himself as the country’s leader. His “authority” is decreed by Washington.

The absurd irony of Trump and Macron, among others, backing an unconstitutional, self-declared president in Venezuela is staggering. Half the population of the US and France despise their supposed leaders. Trump is barred by opposition lawmakers from making the annual State of the Union speech for the first time in US history, while Macron is beset by nationwide protests and requires heavy police protection wherever he goes.

And yet here we have Trump, Trudeau and other discredited Western figures, declaring who should rule Venezuela.