Violation of International Law: Where is Obama’s “Authorization to Use Force” in Iraq and in Syria 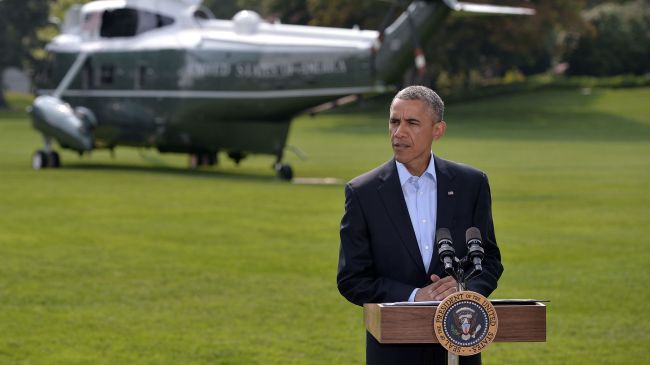 Violation of International Law: Where is Obama’s “Authorization to Use Force” in Iraq By Inder Comar
Obama-Wars3
There was much enthusiasm in 2008 that President Barack Obama would bring a saner and more lawful approach to issues of foreign policy and war and peace. Six years later — with Americans still being killed in Afghanistan, Guantanamo Bay still in active operation, US drones killing people in several countries and even American citizens, and now new mischief in Iraq — it is clear that President Obama has done little more than expand the already large war-making powers of his predecessor and fully enabled the vision of a “unitary executive” with unfettered powers in war and peace.

Where is, for example, President Obama’s domestic authorization for the use of force in Iraq against the Islamic State? Obama has taken the position that the 2001 Authorization of Use of Force (“AUMF”) passed by Congress in the wake of the 9/11 attacks, as well as the 2002 AUMF against Iraq passed before that war provide him with the legal basis for further air strikes. None other than John Yoo, the famous ratifier of torture in the George W. Bush Administration, has rushed to Obama’s defense, claiming that Obama has all the legal authority he needs under the 2001 and 2002 AUMFs.

But the notion that these Authorizations support current military action against the Islamic State more than a decade after they were initially passed is highly flawed. The 2001 AUMF was specifically limited to terrorist groups that had planned or aided the 9/11 attacks. There is zero evidence (and no government official has yet argued) that the Islamic State is somehow tied to 9/11. The 2002 AUMF, which provided the domestic legal basis for the Iraq War, is also untenable as justification for this war as it was based on the purported “threat” posed by Saddam Hussein. Indeed, through his National Security Advisor Susan Rice, Obama himself called for the revocation of the 2002 AUMF in July, mere weeks before now claiming it as a renewed basis for the adventurism in Iraq.

The attacks are also bereft of any basis in international law. Under the United Nations Charter, a country may only use armed force against another country in self-defense, or when approved by the United Nations Security Council. There is no resolution that has authorized the US strikes in Iraq; and the notion that the United States must lob bombs into Iraq as a matter of self-defense is simply not credible.

While not made explicitly (at least not yet), the White House will likely rely on a tenuous theory in international law called the “responsibility to protect,” which argues that countries may involve themselves militarily in other countries in order to protect civilians or prevent other imminent humanitarian harms. This was the basis of the bombing campaign against the former Yugoslavia, which never had UN Security Council authorization. Obama’s current Ambassador to the United Nations, Samantha Power, is a well known advocate of this doctrine and she has recently argued that the US has all the legal authorization it needs for the air campaign.

But there is no basis in international law for such a theory, and more clear-minded observers have rightly concluded that the so-called “responsibility to protect” is a thinly-veiled excuse for Western meddling in countries thousands of miles away. As Antony Loewenstein notes:

We never hear any [responsibility to protect] backers pushing for a military intervention in Gaza to protect the Palestinians from Israeli missiles. Nobody is talking about protecting Egyptian civilians from the brutal, US-backed dictatorship in Egypt. Barely a word is raised to protect the repressed activists in Bahrain or Saudi Arabia. Whether it’s dressed up as solidarity, a responsibility to protect, or an intervention to prevent breaches of human rights, from Iraq to Libya these are grotesque experiments on helpless civilians, the conclusions of which are clear for us to see.

The Nuremberg Trials, which outlawed wars not conducted in conformity in international law, made no exceptions for “responsibility to protect,” and in fact labeled any war not conducted with a solid legal footing as the “crime of aggression,” considered the supreme international crime – largely because of the horrific consequences that take place when wars break out. Yet here, too, this White House has recently argued to the Northern District of California that the Nuremberg Trials are “irrelevant” to the determination of whether Presidents can be held accountable for their actions with respect to war and peace.

From a historical point of view, it is ironic that a young senator from Illinois who campaigned in large part agains the Iraq War and who showcased his credentials as a constitutional scholar would be the handmaiden of the permanent “state of exception” described by the National Socialist philosopher Carl Schmitt, who argued that sovereigns should have the right to suspend the legal and juridical constraints of their societies so that they may act outside of law. This is the opposite of the legal constitutionalism that forms the philosophical basis of the American legal order, which can be summarized with the words of Edward Coke: “The King himself should be under no man, but under God and the Law.”

Even six years later, the stings and scars of the Bush-era wars still haunt those who favor civilization over barbarity, and certainly continue to physically affect those who fought on either side, as well as the millions of civilians who always suffer when wars take place.

The failure of President Obama to seek a more rational foreign policy is a disquieting but important lesson: those pressing for a lawful, constitutional government that resolves international conflicts instead of initiating them have far more work to do and cannot rely on the promises — falsely given — by politicians from any political party. The last Administration was wrong, but it was openly wrong and harbored no pretenses that it sought an imperial Presidency. In contrast, this Administration has cloaked itself in sanctimony even while consolidating the grave excesses of its predecessor. Both parties remain committed to imperialism and the wars that accompany them, or in the immortal words of Tacitus, writing two millennia ago of those who dismantled the ancient republic in Rome in order to create a dynastic and militant empire: “To ravage, to slaughter, to usurp under false titles, they call empire; and where they make a desert, they call it peace.”