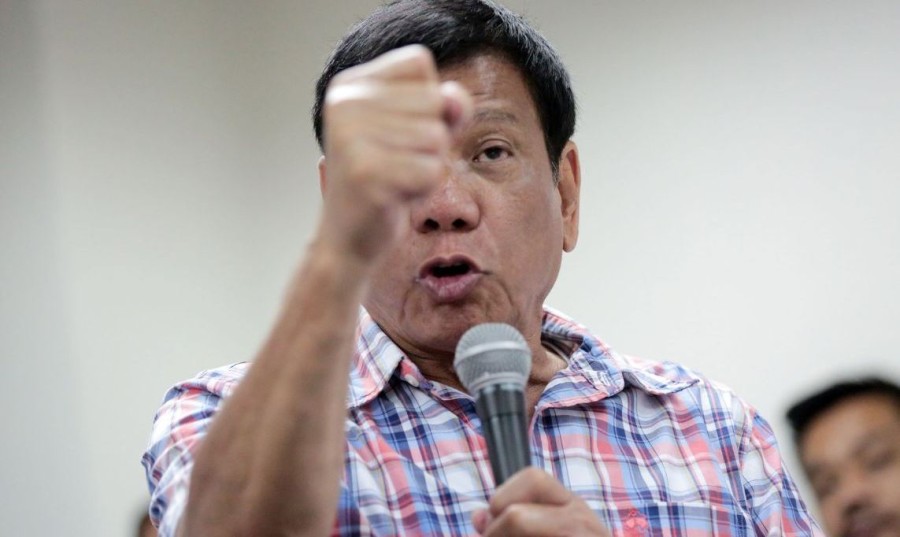 | 10.10.2016 | WORLD
US Loses Major Allies in Asia Pacific
The friendly relationship between the Philippines and the United States has been one of the pillars of Washington’s strategic military rebalance to Asia under President Barack Obama. This alliance is under stain now as the Philippines has announced it will pursue a much more independent foreign policy than it has in the past.

Philippine President Rodrigo Duterte has been stirring up anti-American sentiment in the country since the US administration started to criticize him for alleged human rights violations related to his war on drugs. «I have lost my respect for America», Duterte said on October 4 as he threatened to break ties completely with the United States in favor of Russia and China. Last month he accused the CIA of plotting to kill him. On October 6, the Philippine Foreign Affairs Secretary Perfecto Yasay Jr. released a sharply-worded statement, saying it was time to put «an end to our nation’s subservience to United States‘ interests».

The end to subservience includes the suspension of military cooperation. Duterte wants over one hundred US military personnel, assisting local soldiers with surveillance in the country’ south, to leave the Philippines. The president also wants to halt the 28 military exercises that are carried out with US forces each year.

Philippine Defence Secretary Delfin Lorenzana said on October 7 the Philippine military could manage if the United States were to withdraw assistance. According to the minister, the value of US military aid to the Philippines was «not that much». «We can live without that», Lorenzana told reporters.

The official noted that the Philippines intended to buy arms from China and Russia and the plans to curtail the defence cooperation with the United States were not opposed by the country’s military. He has been ordered by the president to visit those countries to look into the possible acquisition of military equipment. The official announced that the maritime patrols with the US Navy have been put on hold to mark the first concrete action from Manila on the way to break the cooperation.

The patrols were launched as a demonstration of the will to counter China in the South China Sea but President Duterte has opted to engage China in bilateral talks to resolve the territorial dispute. He plans to visit Beijing from October 19-21, and hold talks with both President Xi Jinping and Premier Li Keqiang. Diplomatic and business sources in Manila have said he will be accompanied by about two dozen businessmen, which could lead to deals being forged that could underpin any improved bilateral ties.

Last month, President Duterte said he would visit Russia in 2016. Coincidentally, this year 2016 marks the 40th anniversary of the establishment of diplomatic relations between the Russian Federation (the USSR) and the Philippines. Economic and security agreements have always been on the agenda. Moscow is not taking sides in the South China Sea disputes to make it perfectly fit for the role of mediator, if the Philippines will move to closer relations with China.

In 2015, total mutual trade turnover amounted to just $0.58 billion, a significant drop from $1.4 billion in the year earlier period. Igor Khovaev, the Russian ambassador to the Philippines, sees a lot of opportunities in the fields of transportation, energy, trade, investments and mining. Khovaev said the two countries can work together in the fields of trade and economic cooperation, security, education, science, and culture. Tourism is on the rise. Inviting more Filipinos to work in Russia is also on the agenda. According to the envoy, «Our relationship is really friendly. We have a positive legacy of bilateral cooperation. We have no disputes, no political contradictions or differences».

A coincidence or not, but the government of Pakistan also made the same kind of statement at about the time the Philippine leaders announced the plans to stop military cooperation with the US. Pakistan would cozy up to Russia and China if the US fails to reconsider its position of Pal-India conflict in the disputed Himalayan region of Kashmir. «The US is no longer a world power. It is a declining power. Forget about it», Mushahid Hussain Syed, the Pakistani PM’s special envoy to Kashmir, said at an Oct. 5 discussion at the Atlantic Council, a US prestigious think tank.

«There has been slow and steady building of relationship between Moscow and Islamabad», said Syed, referring to the joint military exercise between Pakistan and Russia. Syed also reportedly indicated that «the Russian government has for the first time agreed to sell arms to Pakistan and the US should take note of this changing regional alignment».

The deterioration of ties with the Philippines and Pakistan is part of a broader picture. For instance, the US relations with Thailand, an old American ally, have hit bumps since the Thai military seized power in a 2014 coup.

Washington has lacked power to influence ASEAN member states and make them take an anti-China stance.

People across the Asia-Pacific think American clout is dwindling and that China will dominate the region over the next decade, according to a recent survey by the University of Sydney’s United States Studies Center.

More than four years after the Obama administration announced its «pivot to Asia», American allies in the region are looking somewhat unconvinced. Roughly six-in-ten Japanese (61%) say the US has declined in importance over the past 10 years.

The American clout in the region is questioned even in Australia.

«The balance of military power in the region is shifting against the United States» reads a report from the Center for Strategic and International Studies (CSIS). «The Obama administration still has not articulated a clear, coherent, or consistent strategy for the region», the study says.

The US administration has failed to have the Trans Pacific Partnership (TPP) ratified by Congress – a serious setback to undermine the US credibility in the region. According to Singapore Prime Minister Lee Hsien, who spoke in the name of Asia Pacific signatories, «For America’s friends and partners, ratifying the trade pact is a litmus test for your credibility and seriousness of purpose».

Excluded from the TPP, China is offering another pact – the Regional Comprehensive Economic Partnership (RCEP), a free trade agreement comparable to the TPP that does not include the United States. Beijing is also pledging more regional loans through its new Asian Infrastructure Investment Bank (AIIB) and the Silk Road fund. At the same time, the Russia-led Eurasian Economic Union (EAEU) is expanding to the region. Moscow and Beijing are discussing the prospects for a trade and economic agreement between the Eurasian Economic Union (EAEU) and China.

The recent trends in the region further impede Washington’s plans to expand the footprint of American forces in the region. The US is losing its major allies as its clout in the region is hopelessly waning.