US at Crossroads Between Russia, Middle East, and China 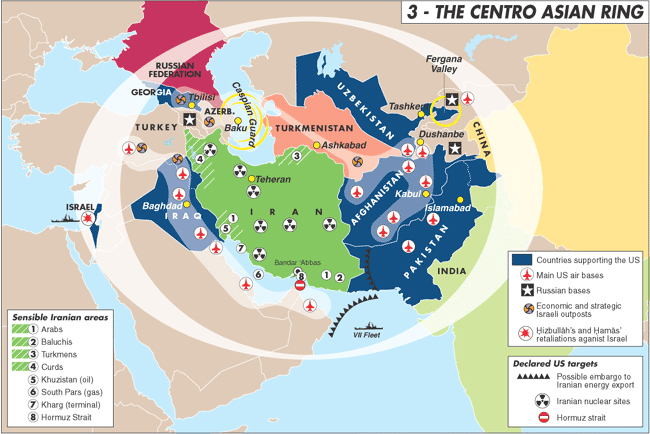 Washington officials have recently announced that the United States is going to increase its military presence in Iraq, at the same time a number of US troops have been deployed in the Iraqi Kurdistan. Simultaneously, the White House is applying a lot of pressure pressure on Iran in the negotiations on the Iranian nuclear program. The US is trying to force as many concessions from the Iranians as it possibly can, including the reduce in support Tehran has been providing to Damascus. Yet, Washington refuses to decrease the tension around the situation in easternUkraine, claiming that Russia had been sending military equipment and troops there. Europeans have found themselves in a position similar to Iran, since the US officials have been twisting their hands in order to force them into adopting a new package of anti-Russian sanctions. Therefore, it’s no coincidence that Russia and China have made a number of major steps lately to increase their efforts in the fields ofenergy and economic cooperation. The question then arises as to what is the ultimate goal of the US foreign policy – Ukraine, the Middle East or China? Should the Washington think-tanks be presented with such a question, one would definitely hear an answer that the Obama administration can handle the a number of different matters simultaneously. However, should you persist, the outcome of your inquiry can prove to be rather peculiar.

It is a general belief in Washington now that, if chosing between the two recent crises – in the Middle East and Ukraine – the Middle Eastern one is by far the most important to American interests. There’s a number of indicators that prove this statement. Firstly, the Middle East is now torn apart by a full-scale war, especially in Iraq and Syria, and the United Statescarrying out air strikes on a daily basis against the positions of ISIL militants in these two countries. Secondly, under the USnational security doctrine the protection of the US population at home and overseas is imperative and the Islamist jihadistspresent by far a more pressing threat to US citizens than Russia. Finally, Washington think-tanks believe that the regionalstructure of the Middle East is now going down in flames, and it will take several decades to build a new one, while theEuropean structure has been “slightly shaken” by the events in Ukraine.

Moreover, American politicians, lawmakers and analysts believe that the United States, while focusing on Russia and theUkraine crisis, is not paying enough attention to Iraq, Syria and Iran. Therefore, accusations are being voiced against Obama’s administration on the grounds that Washington’s obssession with Ukraine allowed ISIL militants to establish control over large parts of Iraq and Syria.

However, for those concerned with Vladimir Putin‘s actions aimed at restoring Russian influence in the post-Soviet space, the Middle East looks more like a dangerous distraction. Supporters of this approach fear that the United States may once again bedrawn into the “war on terror” in the Middle East, while the main security threat to US interests is growing in Europe. Thisposition is based on the premise that the US has not fully realized how serious are the actual challenges that are associated with the strengthening of Russia. The supporters of this approach are sure that the return of the Crimea along with a de facto secession of the south-east territories from Ukraine is just the beginning of redistribution of the world at the expense of the United States. Moreover, they are convinced that Russia will become a threat to the rest of Ukraine, and even the Baltic states.

The fact that Washington dismisses the possibility of its direct military involvement in the Ukraine crisis makes it pretend that it is not as tense as it could be, but in fact it is indirectly raising the stakes in the game called “the creation of a new world order.” The worst case scenario, that is being discussed behind closed doors in the White House, is the alleged possibility of Moscow putting its tactical nuclear weapons to actual use. This, of course, would be the biggest crisis in the field of international security since the Cuban missile crisis, and it would be by far more grave and dangerous than the next phase of war in Iraq that has been goin on for 35 years now, with a certain degree of Iran’s involvement.

Naturally, the vast majority of sensible and sane politicians and experts in the US do not believe in the nuclear scenario, although many of them still fear that Moscow will start a full-scale conventional assault in Ukraine or provoke a “rebellion” of the Russian-speaking population in the Baltic states, that are NATO members. Should Russia invade the Baltic States and shouldNATO fail to react, they argue, Moscow will show the world that the Western military alliance is in fact a “paper tiger.”

This part of the US political elite hopes that the ever increasing pressure on the Russian economy will persuade Putin to abstain from escalating the Ukrainian conflict. Although their opponents are convinced that the economic crisis may instead push Russia to take a number of unpredictable steps by switching to “brute force” scenario.

Against this background Obama went to the APEC summit in China. For supporters of the American ‘pivot’ to Asia, the ever growing Chinese influence is the main challenge in the long term. A handful of think-tanks is convinced that while the US will try to deal with the two above mentioned crises, China will be able to establish control over East Asia and the Asia-Pacific region, which is slowly being transformed into a major center of the world economy. These think-tanks insist that the Obama administration must take steps to prevent China from growing even more stronger in military, political and economic terms. Asfor the recent Russia‘s turn to China in search for a new major energy market, it can only make China stronger by providing it with gas and modern weapons. Americans are increasingly nervous about the formation of a new alliance between China – Russia in Asia. And, apparently, these think-tanks are close to the actual understanding of the processes that affect the formation of a new world order.

Time will tell how well the Obama administration is able to set the US strategic priorities straight, since it seems to be a turning point in the new world order creation process, and it will most likely be too late to change anythings when the bets are placed. Apparently, the major challenge the United States is facing today is China, not Russia or the Middle East. The rapid rise of China is truly significant, though it looks deceptively long-term from the outside, therefore one may gt the impression that it is not leading to a possibility an immediate conflict between China and the United States.

Though, the collapsing states in the Middle East and the possible spread of radical Islamic terrorism is the threats that are now should be dealt with. By the first occupation of Iraq and the consequent actions Washington has unleashed a chain of color revolution that led to the events that it cannot control anymore. The supporters of the US in the region – Riyadh and Doha that assisted the White House with its plan, are now facing a threat an imminent collapse due to the rise of Islamists.

Iran will only benefit from this course of events, China and, to some extent, Russia, will benefit too. But it’s now imperative for the US to find a balanced approach to China, Russia and the Middle East, since a failure to achieve this goal may not only endanger the international peace, but would affect the very survival of the United States as a super power. Otherwise, America will have to settle with the role of a regional power, with no real influence whatsoever over the situation in Europe and Asia. It seems, that this will be the most likely scenario since the recent actions of Barack Obama are showing that he has realized his miscalculations and now is trying to get out of trouble he has created himself. Still, he has no clue what to do.