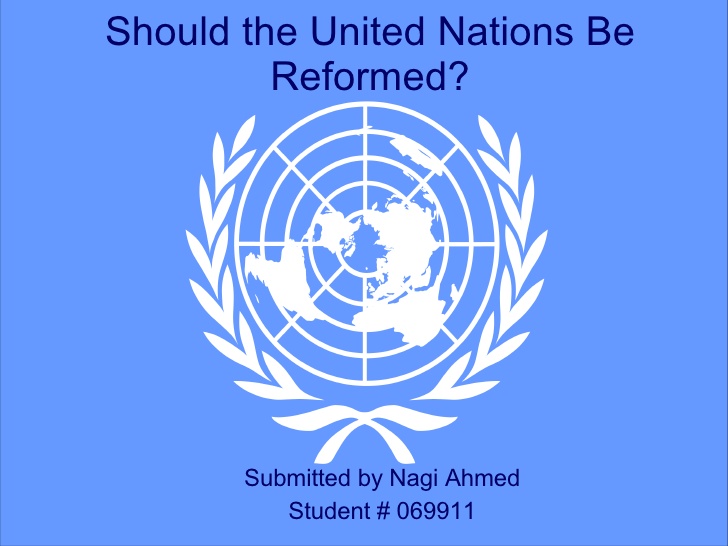 Yuriy A. Sergeyev, the Ukraine’ Permanent Representative of Ukraine to the United Nations, said he dreams about creating a broad united front against Russia in the United Nations. The idea has failed as yet. The Ukraine’s Ambassador believes the UN Charter stands in the way of its implementation. If not for this anachronism, the problem could be solved easily. For instance, Russia could be expelled from the Security Council. Sergeyev complains that Russia can veto the decision. He wants to revise the provisions on veto power of UN Security Council (UNSC) permanent members. According to him, the idea is being debated inside the United Nations.

True, UN reforms have been discussed for many years. The Special Committee on the Charter of the United Nations was created in 1992. Its agenda included the reform of the Security Council – the main UN body responsible for international peace and security.

At present the negative influence of the West is one of the main factors necessitating the changes. The harmful effect of sanctions, including the third countries, has been on the agenda recently. Many UN members have emphasized that sanctions have become a threat to the whole international community. Some view sanctions as an uncivilized way to exert pressure. It leads to exacerbation of ethical problems. Is it legitimate to achieve one’s goals by making people suffer? Hardly so. The legitimacy of punishing people who live in the countries under sanctions is questionable. The use of unilateral punitive measures in violation of international law gives rise to concern. Quite often unilateral sanctions are used as a mechanism of extraterritorial application of national legislation to violate rights of other states and individual rights of persons involved. Many countries have stated that sanctions are justified only if imposed in accordance with the UN Charter and international law.

The Russian – Belarusian initiative to request the opinion of the UN International Court of Justice about legal consequences of using force without sanctions of the UN Security Council (except the right for self-defense) is still topical and may influence future codification of the principle of non-use of force in international relations. This is a burning issue as recent events prove. By and large, the UN reform agenda is of a positive nature. The West and some developing nations try to stir other issues to be added to the agenda. For instance, they want to discuss the cancellation of veto power or a change in the mechanism the right to veto is used. The proposals on broadening the composition of the United Nations Security Council would render it uncontrollable and impotent. The Ukraine’s efforts to introduce changes may spur the negative trend, especially in view that a representative of Ukraine was elected Vice – Chairs of the Special Committee on the Charter of the United Nations at the Committee’s last session.

In a nutshell, the efforts to reform the United Nations and boost its effectiveness are added by attempts to use the discussions as a cover for the plans to destroy the organization. The UN has been under attack since a long time ago. Systematic and persistent attempts have been made from inside and outside to undermine the organization. For instance, an Alliance of Democratic States, an alternative international organization was proposed by Ivo Daalder and James Lindsay in the May 23, 2004 Washington Post op-ed. In 2008 the concept (calling for the creation of League of Democracies) was supported by Senator John McCain, the former United States presidential candidate. According to McCain, only democratic nations should become members of the new organization. It’s not a secret that Russia is to be excluded. The League would act more resolutely than the United Nations. There is an insinuation here that the organization would be more effective without the Russia’s veto to impede (at least legally) the implementation of aggressive interventions by the West.

There are destructive trends taking place inside the United Nations. First, the efforts to undermine the UN are undertaken by the members of different UN bodies: from the General Assembly and Security Council to the Office of the United Nations High Commissioner for Human Rights (OHCHR) and the Economic and Social Council (ECOSOC). The tactics employed are aimed at presenting the United Nations as an impotent organization unable to effectively take decisions. There have been many attempts to submit draft resolutions to the UN Security Council without previously consulting Russia or knowing in advance the Russian Federation was firmly opposed to a certain initiative (and was resolute to use the right of veto). That’s what the West (which enjoys the majority in the Security Council) did trying to push through a decision to use force against Syria. Three times draft resolutions were submitted when in was known in advance that Russia opposed the decisions and would resort to its right of veto. The goal was to discredit Russia and demonstrate the ineffectiveness of the decision making process in the United Nations Security Council. The same applies to the issue of referring Syria to the International Criminal Court. In recent months a real hue and cry has been raised on the issue in the UN with the participation of all its bodies.

Second, the attempts to introduce drastic changes in the United Nations are undertaken by UN operational structures, especially its Secretariat. It’s all done under the disguise of meeting «new challenges». In reality new elements are introduced into the existing system to destroy it.

In 2004 the High Level Panel on Threats, Challenges and Change (known as the group of policy experts) convened by Secretary General Kofi Annan submitted to the United Nations the Report on Threats, Challenges and Change. The Panel’s proposal on broadening the composition of the United Nations Security Council stood out. There were competing proposals to restructure the UNSC. In the overall scheme of things, the commission suggested grouping the member states into four regional blocs – Africa, Asia, America and Europe – and that each region should be represented by six countries in the Security Council. To address the issue of enlargement, and purportedly to increase both the effectiveness and credibility of the Council, the High-level Panel proposes two alternative models for enlarging the Council from 15 to 24 members. In Model A, there will be six new permanent seats with no veto power, whereas in Model B there will be no new permanent seats, but eight four-year renewable-term seats. But the panel refrained from specifying which countries should or should not be afforded membership. However, the Panel reasoned that any reform should «increase the involvement» of those who contribute most – financially, militarily and diplomatically – to international peace and security». According to experts, the concept of regional representation is the implementation of the idea to divide the world into 10 regions. The «ten regions world organization» was proposed in the report Mankind at the Turning Point by Mihajlo D. Mesarovic and Eduard Pestel issued in 1974 to be submitted to the Club of Rome (a global think tank that deals with a variety of international political issues). The report offered the concept of «organic growth» according to which each region was to carry out a special function. The authors suggested that the world be divided into three major parts. Russia was excluded from the list of states with global influence (to be correspondingly deprived of the prerogatives it has in the current structure of the United Nations). It is worth to mention the experts’ position on veto power. They offered to introduce the system of «indicative voting» whereby the members of the Security Council could call for a public indication of positions on proposed actions. Under this indicative vote no votes would have a veto effect, nor would the final rally of the vote have any legal force.

The well-directed attempts to implement a reform aimed at reduction of the Russia’s clout have been taking place since a long time ago. In 2016 Ukraine may become a non-permanent member of the U.N. Security Council. No doubt it will be elected if the current regime stays in power till that time. The Ukrainian Ambassador has already let know that it plans to reap «individual dividends».

The international community has to realize that in the absence of power able to counterbalance the hegemonic aspirations of the West the United Nations Organization will turn into an instrument of world totalitarianism to sanction aggressions and legitimize the overthrow of resistant governments. As the debates on the United Nations reform continue, Russia should not limit itself to separate fragmentary cosmetic proposals but come up with an overwhelming program of actions within the new «global context’ which would be the program of preserving the United Nations Organization.
Tags: UN Russia Ukraine US