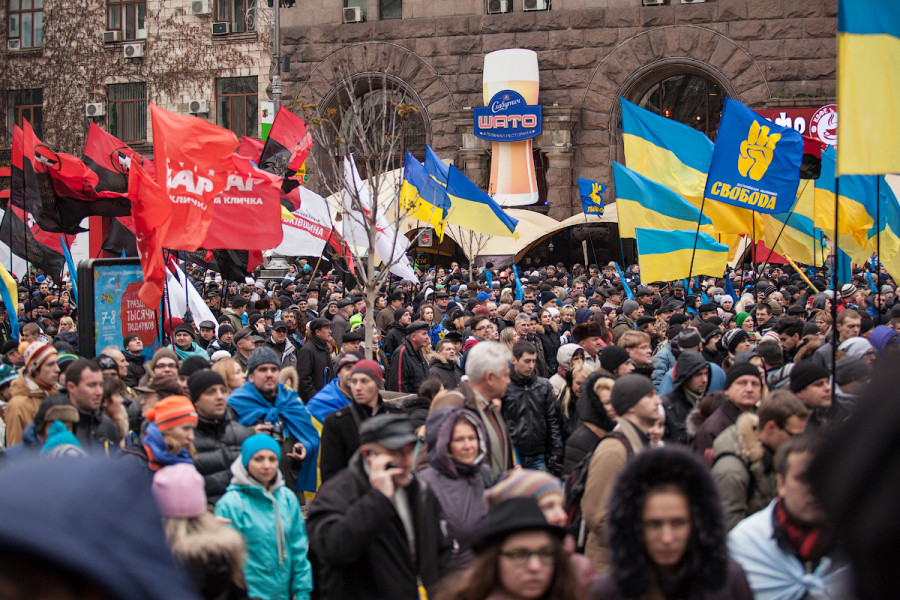 Western leaders won’t explain. Nor will the media. Hard truths are buried.

Tolerating no opposition. Ruling by intimidation. Force-feeding neoliberal harshness on impoverished people. Making life unbearable overall. More on this below.

“For the first time since Ukraine’s independence in 1991, the nation has the opportunity to evolve into a true European democracy, thanks to the recent election of a pro-European constitutional majority to Parliament. A pro-reform and pro-European Parliament and government are now in place, and a politically reset Ukraine has been empowered to make permanent changes that have been long awaited by the Ukrainian people and by the international community.”

Fact: Ukrainian-style democracy is none at all. Pure fantasy.

Fact: Presidential and parliamentary elections were farcical. Illegitimate by any standard.

Fact: The same one his father represented years earlier. Bequeathed to his son.

“…Ukraine’s political class is built on the foundation of nepotism and cronyism, as all the political forces display the tradition of nominating candidates on the grounds of kinship. Russia’s Foreign Ministry said parliamentary elections “were marked by an unprecedented number of gross violations of basic international standards for democratic elections, which were recorded during the election campaign, election day and vote counting. A year passed since” Maidan protests, said Poroshenko. Followed by “the Revolution of Dignity,” he claimed.

“Ukrainians were opting for freedom, not fear, choosing democracy, not dictatorship, and believing in the future, not the past. The idea of a new Ukraine was born. We had the courage to fight for it. Now we have the institutional powers to implement it.”

Fact: Washington orchestrated what happened. Putschists practically lived at its embassy. It was coup d’etat headquarters.

So is claiming a Moscow threat. None whatever exists. No evidence suggests otherwise.

“On the external front, we are united in fighting for our freedom and for our future as an independent nation – a fight that has implications for all of Europe and global security,” said Poroshenko.

Poroshenko its puppet leader. Presiding over a police state apparatus. Ruling by intimidation.

Serving at America’s discretion. Remaining president as long as he remembers who’s boss.

(2) Interference by the European Union and United States.

(4) Restrictions on basic freedoms and crackdown on dissidents.

(5) Discrimination based on ethnic background.

According to Moscow’s press service, content is “based on reports in the Russian and Western media, as well as statements by representatives of the current Kiev authorities and their supporters, eyewitness testimon(ies), observations and on-site interviews collected by Russian nongovernmental organizations.”

A second White Book covers the period April through July 2014. Calling conditions “aggravated in all areas.” Worse than ever.

History has a disturbing way of repeating. Core elements are unchanged. Ukrainians were betrayed. Expect worse ahead, not better.

Putting their lives on the line for freedom. A testimony to courage. Deserving universal support.

Their liberating struggle continues. Largely on their own. Russia the only nation providing vitally needed humanitarian aid.

“For the first time, Human Rights Watch clearly recognized that the Ukrainian military are using multiple-launch missile systems and banned weapons against civilians in Donbas. This confirms the data contained in the White Book released by the Russian Foreign Ministry. Rights activists must put pressure on the West and on Kiev authorities to prevent further crimes.”

“Why does this happen in Europe of the 21st century,” asked Dolgov? “What is happening presents a major threat to the entire international community.”

According to Russia’s updated White Book, “Ukrainian government forces used phosphorus and cluster bombs, Grad and Uragan multiple rocket launchers and Tochka-U ballistic missiles against the population in the south-east of the country.”

“Along with heavy weapons and warplanes, Ukrainian authorities used such ammunition as incendiary, phosphorous and cluster bombs, howitzer artillery and 240-mm mortar systems.”

“Certainly, all such facts can be taken as nothing but war crimes which were committed and are still being committed against civilians.”

As a way to help stop outrageous abuses. Its Ministry saying:

“We are convinced that distraction from reality and attempts to conceal it from the international community or to manipulate public opinion are a hypocritical and dead-locked path.”

Kiev caused Donbas area catastrophic conditions. Up to 60% of homes were destroyed or seriously damaged.

“(I)n favor of strict observance of the Minsk agreement on both sides.”

“Kiev’s time to finally stop the reckless attempts to solve the problem of relations with the south-east of the country with tanks, guns and other military ways, renounce violence and to negotiate with the representatives proclaimed Donetsk and Lugansk people’s republics. No other way, and this without talking heads of Ukraine and their foreign patrons of the establishment of Ukrainian democracy is absurd.”

“The period under review was characterized by the rapid degradation of the situation in the field of freedom of expression and restrict the activities of undesirable Kiev government media,” according to its updated White Paper.

“International News Safety Institute has recognized Ukraine as the most dangerous country in the world for journalists.”

“For this purpose, (it notes) the murder of political opponents, the fabrication of criminal cases, illegal searches, confiscation of property, assault and bullying banal tricks such as ‘junk lustration’ and other illegal methods of influence, contrary to the principle of the rule of law and democratic standards. According to the Russian Federal Migration Service, November 20, the total number of Russian citizens are in Ukraine is 831,085 thousand people. In Russia there is deployed 795 temporary accommodation centers in which there are 38,643 people, including 12,046 children up to 18 years. 486,233 citizens of Ukraine in the territorial bodies of Russia have applied to the Russian Foriegn Ministry Service to determine their legal status. 243,141 of them apply for temporary asylum in Russia and 5,721 submitted applications for recognition as a refugees. All crimes committed during the Ukrainian crisis must be objectively, fairly and effectively investigated.”

“It is crucial that the Ukrainian authorities stop the ‘bandaging’ and begin an independent, impartial, effective and transparent investigation,” Russia’s White Book said.

Thank you a lot (for) tell(ing) the truth. I live in Ukraine, Izmail (city in the Southwest of the country). My relatives live in Donbas. After USA brought ‘the democracy’ to Ukraine, we here cannot even tell what we’re thinking. There is really fascist power here now.”

Vladimir (I am sorry. I’m afraid to sign my last name)”