A New Era Has Dawned: „U.S. Asian, European «Allies» Pivot away from Washington“ by Wayne MADSEN 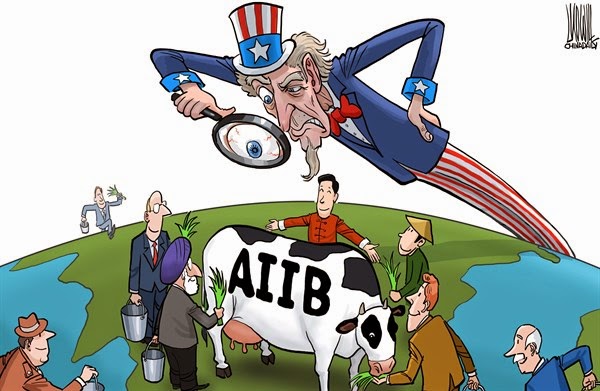 President Barack Obama’s much-heralded «Pivot to Asia» lies in tatters as European and Asian «allies» of the United States march away from the heavily U.S.-influenced Asian Development Bank (ADB) and International Monetary Fund (IMF), as well as the American-led World Bank, to join China’s Asian Infrastructure Investment Bank (AIIB). The latest U.S. «ally» to ignore warnings from Washington about Beijing’s intentions in establishing the bank is South Korea. Previously, the United Kingdom shocked Washington by announcing that it would join the AIIB, the first of America’s NATO partners to announce such a move. The British were soon followed by France, Italy, Spain, Netherlands, and Germany in signing up for the AIIB.

Even the hopeless and hapless neo-conservative prime minister of Australia, Tony Abbott, expressed a willingness to abandon his friends in Washington and join the Chinese-led bank. Although Abbott threw a sop to Washington by saying he wanted to know more about Chinese governance policy over the AIIB, where China is to invest some $50 billion and have a 30 percent voting share, it was clear that Australia would be the latest American ally to pivot to China.

The mass rush of America’s allies to sign up for the AIIB resulted in U.S. Treasury Secretary Jacob Lew making a beeline for Beijing. Lew has been unsuccessful, along with his Japanese counterpart, in leaning on countries, particularly Australia and South Korea, to avoid the AIIB and recommit to the World Bank , IMF, and ADB. Officially, Lew was in Beijing to urge the Chinese to increase the value of the yuan in order to «help the world economy». However, it is clear that Lew, in an act of desperation, was trying to curb the clout of not only the AIIB but the New Development Bank, established in Shanghai with a $50 billion Chinese investment, by the BRICS bloc – Brazil, Russia, India, China, and South Africa.

While Lew was in Beijing desperately trying to use the diminishing power of Wall Street and the City of London to influence the world’s financial system, Chinese president Xi Jinping was addressing delegates at the Boao Forum in Hainan. The forum, a Chinese-led alternative to the Davos Forum in Switzerland, heard Xi commit China to treaties of friendship with all of its neighbors in order to push for China’s «Silk Road» project: a rail, highway, commercial air, and maritime initiative linking China to Europe, the Middle East, and beyond. Instead of hearing lofty speeches from billionaire poltroons like George Soros and members of the Rothschild and Rockefeller banking clans, delegates heard Xi and other Chinese leaders put tangible offers of sustained development on the table, including projects ranging from new port facilities in Sri Lanka and Myanmar to high-speed rail lines from China directly to Western Europe and the Middle East.

The presence in Hainan of leaders who have committed to the Shanghai Cooperation Organization, an «anti-NATO» bloc of Eurasian nations, indicates that countering U.S. and NATO expansion and the anti-Russian moves by Washington were discussed even though the subjects were not on the official agenda. Present at Boao were Armenian President Serzh Sarsgyan, Austrian President Heinz Fischer, Kazakhstan Prime Minister Karim Massimov, and Brazilian Supreme Court Chief Justice Ricardo Lewandowski, as well as Russian First Deputy Prime Minister Igor Shuvalov.

At the Boao Forum, Xi outlined China’s support for the Maritime and Silk Road (MSR) projects for which China has already anted up $40 billion in the Silk Road Development Fund. The Silk Road encompasses a number of branches, including the Bangladesh-China-India-Myanmar corridor (BCIM) and the Pakistan-China Economic Corridor, which connects Pakistan and China through Pakistan’s Azad Kashmir province. The Maritime Route part of the Chinese project connects Chinese ports to those in Malaysia, Indonesia, Vietnam, India, Sri Lanka, Greece and Kenya. The United States, through its military operations in Southeast Asian region, has tried to wean Vietnam, the Philippines, and other nations away from China and into the U.S. orbit. However, Washington, which has nothing financially to bring to Asia’s table, has been rebuffed by countries more interested in Chinese development money than in American warships, aircraft squadrons, and barracks full of U.S. Marines. Even the government of Okinawa, which hosts a large U.S. military presence, has rejected plans by the Pentagon to build a new U.S. airbase on the island. Rather than a «pivot to Asia,» Washington’s policies have earned it a «pivot away from Washington and Tokyo» by the independent-minded governor of Okinawa, Takeshi Onaga.

In Washington, Lew told a congressional committee that he wanted assurances that the AIIB was committed to workers’ rights, environmental issues, and anti-corruption. This missive comes from an individual who was the chief operating officer of Citigroup’s Alternative Investments division, which helped hide Citigroup’s ill-gotten gains during the 2008 bank meltdown in such non-transparency tax havens as Bermuda and the Cayman Islands. Lew also represents an administration that has implemented trade and energy policies that have been devastating to organized labor and the environment as witnessed by the movement of American jobs abroad and permitting renewed dangerous fossil fuel drilling in the devastated Gulf of Mexico.

However as unwanted as it is by Washington, the transfer of global financial control from Wall Street and City of London to the new development banks and funds of Beijing and Shanghai is a «fait accompli». in a recent article in «Global Times,» Cambridge University Senior Fellow Martin Jacques succinctly summed up Washington’s new dilemma, not only in Asia, but worldwide: «The Americans have boxed themselves into a corner, increasingly deserted by all and sundry. As has been pointed out, they would have been better off joining the AIIB, but this was never a serious option because such a move would have been rejected by the US Congress . The AIIB is a classic manifestation of China’s economic power in the region and the kind of influence that it now exercises. The United States cannot compete with this: its offer in the region is military strength. But in the longer run, economic power trumps military strength, as we have seen so clearly demonstrated over the last two decades».

The world is recognizing that the era of «Pax Americana» is now over. Taking its place is a new «Pax Sinica» bolstered by support from the BRICS alliance and China’s new partners in the AIIB and New Development Bank.
Tags: AIIB IMF Asia-Pacific China Middle East US