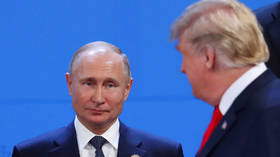 Follow RT on
Russian President Vladimir Putin and his American counterpart Donald Trump on Thursday held rare phone talks, which, in contrast with the current political narrative in the US, focused on cooperation and unity.

The talks revolved around strategic stability issues, the Kremlin press service said Thursday, and the two leaders agreed to continue negotiations on the crucial New START treaty. The major arms control deal is set to expire next year and its future remains uncertain. Trump has expressed hopes that the US, Russia and China will avoid an “expensive” three-way arms race, a statement from the White House has said.

“President Trump reiterated his hope of avoiding an expensive three-way arms race between China, Russia and the United States and looked forward to progress on upcoming arms control negotiations in Vienna,” it said.

The presidents then discussed the Iranian nuclear program, agreeing the regional stability must be preserved with a collective effort.

The two leaders in particular discussed economic cooperation and efforts to “reopen” the global economy during the times of the Covid-19 pandemic. Trump and Putin agreed the US-Russia cooperation in fighting the pandemic has been“positive,” the Kremlin press service said.

ALSO ON RT.COM‘They want to win’: NUCLEAR confrontation becomes likelier as US races for global domination, Russian FM saysReading the two statements one couldn’t help but notice that the phone talks were a far cry from domestic political discourse in that they focused on cooperation. Trump and Putin even remembered the 45th anniversary of a joint Soviet-US Soyuz-Apollo space mission.

Back in the US, Trump’s Secretary of State Mike Pompeo played “bad cop” by telling European companies to “get out” of Russia-involved pipeline projects Nord Stream 2 and TurkStream, claiming that the strategic energy projects were “aiding and abetting Russian malign influence.”

Meanwhile, Trump’s Democratic rival Joe Biden has lately invoked the well-worn tune of the “Russian interference” as part of his presidential campaign message, saying he was “putting the Kremlin and other foreign governments on notice” that – if elected in November – he will “treat foreign interference in our election as an adversarial act.”