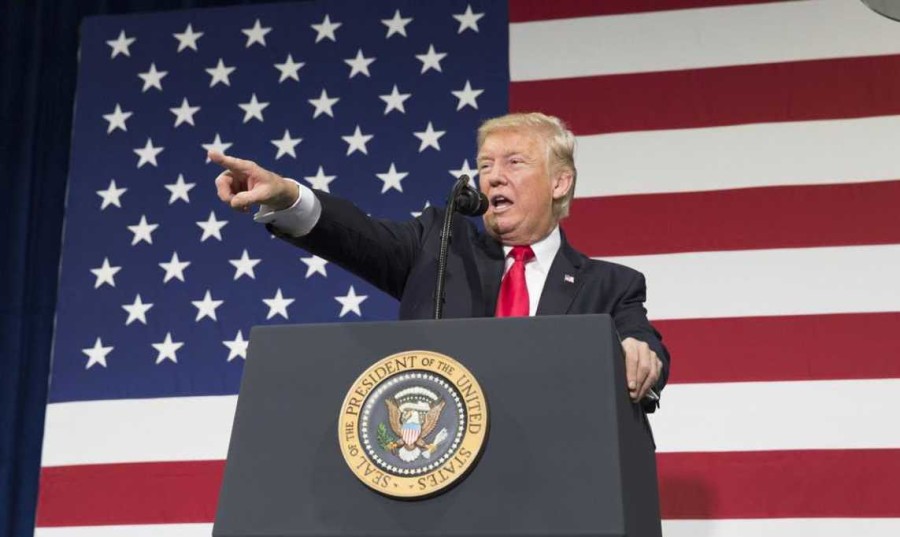 About a year ago I advanced the theory that US President Trump understood that the only way to „Make American Great Again“ was to disentangle it from the imperial mission that had it stuck in perpetual wars. I concluded that his statements implied that he believed that

1) the post 9/11 military interventions did nothing for American security;

3) the alliance system is neither useful nor a good deal for the country;

4) Russia is not the once and future enemy.

I further argued that he understood that the Gordian Knot of entanglements could not be cut from the American end because Americans were too wedded to the idea that the USA was „the indispensable nation“ or too complacently accepting of the conceit that it had a moral obligation to set the world aright. (Gallup has just revealed that Americans greatly overestimate the respect and affection the rest of the world holds for them.) In any case „The Swamp“ was too entangled in the war business ever to change. I speculated that he understood that the cutting could only come from the other side.

In short I saw method in Trump’s boorishness and well-displayed contempt for Washington’s allies.

So what do we find thirteen months later? Well, of course, one year is not nearly enough time to cause American allies to quit. Washington has not pulled out of NATO and no one has left it, the wars continue, the bases remain; but the Knot is loosening a bit. Despite very strong pressure from Washington, Ankara is going ahead with its S-400 purchase and Berlin is determined to complete Nord Stream. Washington has made its opposition plain – and with menaces – but these two important allies persevere in their contumacy.

Recently more cracks widened. Secretary of State Pompeo at Warsaw, trying to get everyone on board with attacking Iran: „Sadly, some of our leading European partners have not been nearly as cooperative. In fact, they have led the effort to create mechanisms to break up our sanctions.“ Vice President Pence at the Munich conference all but ordering the allies to get on board with Washington’s leadership, to stop buying weapons from „our adversaries“ and equating opposition to Washington’s stand on Iran with anti-Semitism.

These efforts fell flat. Even The Economist called the Warsaw effort „shambolic“ and a number of invited key players sent lower-ranking substitutes. So unenthusiastic was the response that the meeting had to be rebranded as about security in the Middle East rather than about making war on Iran. So, altogether, a bust: the whistle blew but the dogs didn’t come. But worse, Pence’s speech at Munich, praising Trump in every paragraph and threatening allies, fell completely flat with almost no applause. German Chancellor Merkel, speaking for the opposition (lots of applause) demurred. NPR sums up the two meetings:

First, in Warsaw, Poland, the U.S. organized a conference seeking to marshal international outrage over Iran, and Vice President Pence urged France, Germany and the U.K. to abandon the Iran nuclear deal, accusing them of concocting a „scheme“ to continue to business with Iran. Top European allies trying to keep the nuclear deal alive declined to send top-level diplomats to the conference.

Then on Saturday, in Munich, German Chancellor Angela Merkel addressed the security conference with several critiques of U.S. foreign policy – and received a sustained standing ovation.

So, a failure for Washington but, if you agree with my theory, a success for Trump’s scheme.

Merkel devoted some time in her speech to Russian gas supplies, pointing out that in the Cold War, both Germanies reliably received gas from Moscow, thereby reminding Pence, if he was listening, of Disagreement Number Two – Nord Stream. We had earlier been reminded of Disagreement Number One which was the unilateral American rejection of the JCPOA. Washington has sanctioned Tehran; the repellent CAATSA (not, in fairness, Trump’s doing) means that anyone who trades with someone Washington dislikes will also become a target of Washington’s sanctions. In reaction, Germany, France and the UK have developed a Washington-independent payment system. How effective it will be remains to be seen but it is undeniably a rebellion against Washington’s fiat.

And now we come to Disagreement Number Three: Washington’s rejection of the INF Treaty. Negotiated in 1987 between the USA and the USSR, it eliminated all land-based missiles with ranges between 500 and 5500 km. The Treaty had been preceded by large demonstrations across Europe against the deployment of American missiles. Washington’s excuse is that Russia has violated the Treaty (Theodore Postol has convincingly argued that, whatever Russia may have done, the USA did violate it). Some see it as the latest target of Washington’s dismantling of the arms control treaties of the Cold War, although one cannot rule out the possibility that this is Trump’s opening position to get an new INF Treaty with Russia and China. But it could put the Europeans on Moscow’s target list if the US puts intermediate range missiles into Europe. (The European protests were a causative factor of the original treaty.) In her Munich speech, Merkel called the cancellation „very bad news“ and the former head of the NATO Military Committee, Harald Kujat, flatly called it “a betrayal of the security of the European allies„. The full ramifications of this latest trampling of allies‘ interests have not been felt but the Atlantic Alliance will not be stronger for it. And I doubt allies will be any happier with Pompeo’s latest blank war cheque.

Even in Korea, where Trump’s new foreign policy has had, perhaps, its greatest success, we see a touch of the same thing. The two Koreas and China are moving forward whatever Washington does or, as in the Hanoi meeting doesn’t, do.

The economic integration plans are moving forward even before the nuclear issue has been resolved, the sanctions have been lifted, or a formal treaty ending the war has been signed. The entire region appears to be breaking out of Washington’s orbit and charting a new course on its own.

Two things seem pretty clear: the Trump Administration is alienating its allies and it doesn’t seem to care very much that it is. Washington has always overborne its allies but it has usually been more polite and discreet about it. Today there is no attempt to hide it: Trump & Co brusquely tell them our way or else.

Donald Trump and his “America First” attitude has thereby afforded Europeans some space to maneuver and establish some level of autonomy, resulting in increasing synergies with Moscow and especially Beijing.

Or will Europe swallow the insults? Will it stand on its „own two feet„? Or have its feet atrophied? We don’t know yet: there is talk, but talk is cheap and easy.

My question remains: we see the alienation but is it deliberately-caused or is it not? Is Trump behaving in a boorishly unilateral way to force his allies to break the imperial connection, or is it just the habitual „America First“ style now crudely stripped of the earlier politesse?

(Which is not to say that they’re aren’t some significant inconsistencies in Trump’s foreign policy and, on closer examination, these exceptions become very confusing and inconsistent themselves. I will take up this question separately.)

From the Black Sea to the East Med, Don’t Poke the Russian Bear by PEPE ESCOBAR •