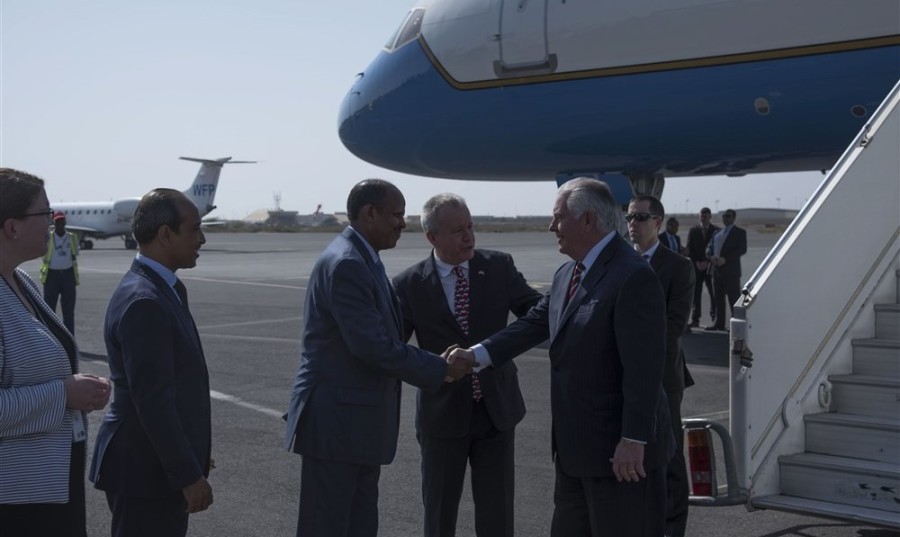 When US Secretary of State Rex Tillerson kicked off his African tour last week, it was clear that the ex-oil CEO had “great power competition” on his mind, rather than the advertised purpose of cultivating “partnership” between Washington and African states.

While the Texan oil tycoon-turned diplomat growled out the usual State Department platitudes about “partnership” and “sharing a bright future”, Tillerson gave the game away with an unseemly harangue about China. He began his five-day trip to five African states with a pointed verbal slur on China’s role in the continent as its paramount trading and investment giant.

The top American diplomat affected to “warn” his African hosts that China’s motives were allegedly malign. He deprecated Chinese financial arrangements as being “opaque”, “corrupt” and “predatory” – aimed, he said, at undermining African sovereignty. It was an extraordinary way for Washington to pitch itself as the supposed “partner of choice” for Africa, not least because of the derogatory caricature leveled at China.

It was notable too that Tillerson’s visit to Ethiopia, followed by Djibouti, Kenya, Chad and Nigeria, preceded – or perhaps “pre-empted” – a tour of the continent by Russian Foreign Minister Sergei Lavrov. Separately, Lavrov arrived in Ethiopia’s capital Addis Ababa only hours after Tillerson. The two diplomats did not meet despite a reported invitation from the Russian side for an impromptu gathering. Such a meeting could have signaled a welcome boost for diplomacy and multilateralism. But multilateralism doesn’t seem to be what Washington is after.

The Russian diplomat reportedly said one of the main purposes of his visit was to set up a nuclear energy research center in Ethiopia, under the auspices of Russian expertise in that field. Moscow also noted that the visit this year marked 120 years of official diplomatic relations between Russia and Ethiopia.

Lavrov continued his continental itinerary through Angola and Namibia – the latter embarrassingly mispronounced last year by US President Trump as “Nambia”.

Tillerson’s trip to Africa launched with bad-mouthing China will hardly have impressed African leaders. For a start, China is now well established as the biggest single international investor on the continent, far out-stripping that of the United States or former colonial European nations.

China’s multi-billion-dollar investments are propelling African development and economic growth, from infrastructure projects in health, education, transport and communications that are helping to integrate the 54-nation continent.

To be sure, China is not motivated merely by altruism. Its partnerships are commercial, for example, involving soft capital loans that Africans must repay. Nevertheless, the arrangement is spurring real development – unlike a century of underdevelopment bequeathed by Western capital.

This year, for instance, saw the opening of the Ethiopia-Djioubti rail link – a first for the continent – in which the two Horn of Africa states are now joined by a 750-km electrified railway, transporting freight and passengers. It was built with Chinese engineering firms and state finance at a cost of $4 billion. Just one of many such infrastructure projects that are transforming the continent.

Another is the new African Union headquarters which opened in Addis Ababa in 2012, built by China at a cost of $200 million – donated by Beijing as a “gift” to the people of Africa. Hardly, “exploitative” behavior, as Washington would claim.

For Tillerson to disparage Chinese involvement in Africa as “predatory” is a gross misrepresentation, which could actually more accurately describe how the Europeans and the US-dominated World Bank and International Monetary Fund have previously operated across Africa with disastrous humanitarian consequences.

Another oddity about Tillerson’s Africa tour last week is the timing. As noted, Russia’s Lavrov was scheduled to visit well in advance. Tillerson’s arrival, however, seemed to be more of a hasty afterthought.

Two months ago, President Donald Trump provoked international outrage when he referred to African countries as “shit-hole places” during a White House meeting aimed at curbing immigration into the US. The trip last week by Tillerson can therefore be viewed as something of a “damage limitation” exercise, in a bid to smoothen US-Africa relations.

But as a Bloomberg News editorial remarked on the State Department’s cosy words about “partnership”, Tillerson was given the unenviable task of bridging a widening “credibility gap”.

American trade and investment with African has been declining steadily over the past decade. The only sector that seems to be growing is its military operations which are believed to be active in nearly half of the continent’s nations – a process of militarization that began in earnest under GW Bush and which was accelerated by Obama – the latter, ironically, exalted as America’s first African-American president.

Recent strategic documents published by the Trump administration and the Pentagon have invoked the concept of “great power competition” as being a new defining feature of American foreign policy planning. Specifically, Washington has zeroed in on Russia and China as being what it deems to be the rival “great powers”.

The phrase has an anachronistic echo with former colonial powers, when European imperialist states scrambled for the Earth’s natural resources, inciting wars in their stampede for perceived advantage. Wars in which tens of millions of people became collateral damage to gratify elite power and profit.

Last week, Rex Tillerson’s tour of Africa gave practical expression to what this “great power competition” looks like in the modern era. The top US diplomat seemed more interested engaging in schadenfreude and shadowing with regard to China and Russia, rather than in supposed “partnership” with African states.