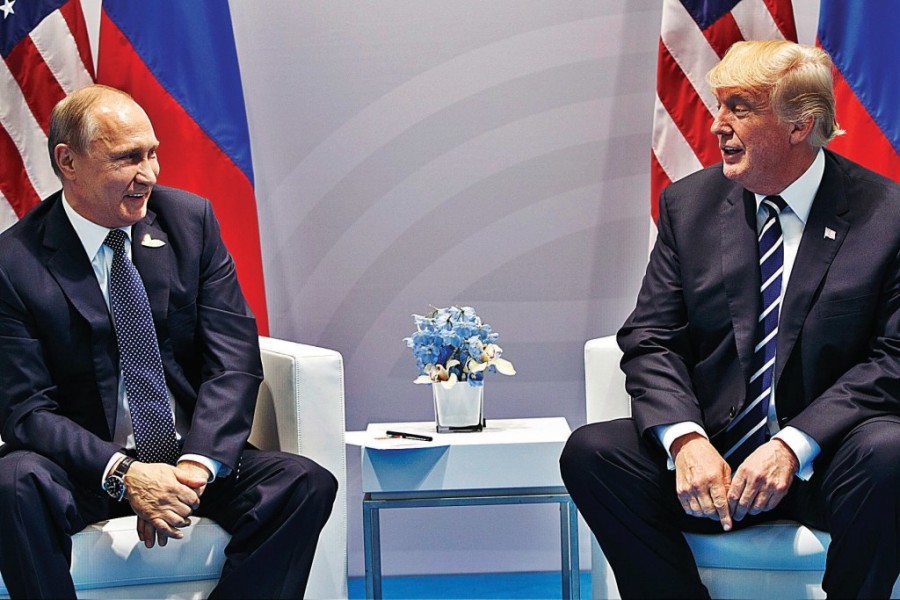 It is now clear that one man, even if that one man happens to be the President of the United States, cannot change the overall trajectory of western aggression against Russia. With the near-ancient exception of Mongolia and the more modern exception of Ottoman Turkey, all of the main foes and aggressors against Russia have been from the west and Europe in particular.

The young United States had little meaningful interaction with Russia except for a treaty of understanding in 1832and the Alaska Purchase in 1867. However, in 1911, the United States decided to rescind its end of the 1832 treaty.

From there on, the tread became one of increased hostility. In 1917, under the radar of the newspapers, many Wall Street tycoons helped to finance the Bolsheviks in both the run-up and aftermath of the October Revolution.  The aim was several-fold. Some in the US simply wanted to weaken a powerful potential rival by fomenting revolution, others were oddly sympathetic to Communism in spite of their position in a world centre of capitalism and others yet bought into the Russian versus Jewish narrative.

After the Revolution the US government gradually turned anti-Soviet when the so-called ‘Red Scare’ made many think that Communism would ‘spread’ to the United States. The reality for much of the political class however was simply that while many in the US and UK had hoped the October Revolution would destroy Russia, the Soviet Union gradually became a new mighty world power which would soon challenge the hegemony of the Anglo-Saxon powers.

Old hatreds were redefined through the prism of Communism and the west’s traditional hatred of Orthodox Russia was simply re-configured in opposition to the Soviet Union.

Prior to must people in the United States thinking Donald Trump had a real chance to win the election, I wrote the following in The Duran:

“Although Russian President Vladimir Putin and Foreign Minister Sergey Lavrov often speak of western governments as ‘partners’, there is more than a tinge of unintentional (at times not so unintentional) sarcasm to such remarks.

In spite of any wishful thinking that a united front could be forged against a merciless Islamic terrorist enemy which threatens civilisations of the east and west equally, the opposite is happening. The West is using the conflicts in Syria and beyond to do what they have always tried to do to a strong and sovereign Russia; destroy it. Here are just a few examples from modern history.

In the 19th century as Russia grew ever stronger and her regional rival Ottoman Turkey grew ever weaker.  The great Western powers of France and Britain, time and again directly and indirectly, aided the Ottomans.

The Crimean War, fought between 1853 and 1856 was a particularly low point in Western-Russia relations. The war was an ugly war, the purpose of which many in Britain and France couldn’t entirely grasp.

Even late Victorian Conservative governments in Britain which themselves tended to favour Ottoman Turkey over Russia at a diplomatic level, came to see the Crimean War as something of a disaster (even after a putative victory) which helped inspire the late 19th century politics of ‘splendid isolation’ from European and Middle Eastern conflicts.

In spite of this, Anglo-Afghan Wars persisted throughout the remainder of the century as supposed proxy conflicts in which Britain acted out of a fear that Russia would try to use Afghanistan as a pivoting point through which to gain influence in British India.

Like many anti-Russian theories over the years, British academic Lord Blake dismissed such fears as fanciful in his 1966 biography of Benjamin Disraeli.

Yet it was this anti-Russian hysteria which led Britain to force Bismarck (who wisely stayed out of the anti-Russian fray) to hold the Berlin Congress of 1878 to revise the Treaty of San Stefano which had rewarded Russia for her victory against Turkey in a war which had ended that same year. Even British Foreign Secretary Lord Salisbury however admitted that ‘we had backed the wrong side’.

If Imperial Russia under Tsar Alexander III was a power that was feared and respected abroad, even by Russia’s enemies, then under the softer and less competent Nicholas II the fangs of Russia’s western enemies were bared.

Here begins a grim tale, one of whose authors is a little known man called Jacob Schiff.

Schiff was the head of the New York based investment firm Kuhn, Loeb and Company. The firm had handsomely financed Japan in her Western backed naval war against Russia, which resulted in a Japanese victory in 1905. This had the effect of inspiring the Russian Revolution of 1905 which weakened the Tsar’s authority.

Called a ‘reformist revolution’ by some, in reality it was a preview of what was to come in 1917.

The idealised tale of a home grown Marxist insurrection in October of 1917 is one of the great myths of history.

The Revolution certainly did have domestic supporters, fighters and true believers.  However it was ultimately financed by foreign funds and led by those who had fomented revolution from outside of Russia’s borders.

In 1916 Trotsky was living in exile in New York. It is claimed that it was there that Trotsky developed a relationship with Schiff, a man Trotsky allegedly referred to as Dr. M in his autobiography My Life.

Schiff’s relationship with Trotsky was clarified by Schiff’s grandson who in 1949 said that the elder Schiff had contributed $20 million towards the Bolshevik cause.

In the latter half of the 20th century US Senator Barry Goldwater helped expose the depths to which Wall Street stooped to help put the Bolsheviks into power. The men who did so were an awkward alliance of hard-line communist supporters aided and funded by those who sought to weaken and destabilise the Russian state, making Russia rife for exploitation.

But it was not just America. White Russian General Arsene de Goulevitch  reported that even before 1917, famed British Imperialist Alfred Lord Milner had given Trotsky as much as 10 million roubles to be paid  back upon the overthrow of the Tsar. De Goulevitch added that the money was filtered by Lord Milner to Sir George Buchanan, the British Ambassador to Moscow who then handed the funds to the Bolsheviks.

It is of course well known that Vladimir Lenin was privately shipped to Moscow by the German state in order to weaken Russia’s war effort in the First World War.

It is also well known that Yakov Sverdlov, a member of The All-Russian Central Executive Committee, was the brother of a prominent New York banker. Upon Sverdlov’s death, his personal safe was filled with gold. This again speaks to the foreign influence on the Revolution.

Once the Soviet Regime became strong and no longer dependent on foreign money, the West spoke of ‘Red Scares’ and the need to fight Communism. However, the pitifully half-hearted Western aid to the White forces during the Civil War is testament to the fact that for the West it was never about Tsarist versus Communist ideology, it was about weakening Russia, whatever government Russia might have.

After the illegal dissolution of the Soviet Union in 1991, the West again set their eyes on dismembering what was left of the Russian state. Corrupt businessmen (many of whom were known as bandits and crooks in their own countries) and so-called NGOs flooded into Russia.

George Soros and his Soros foundation helped set the stage for the financial collapse of 1998 which had brought any tentative recovery to its knees. Incidentally, the Soros foundation was banned from Russia in 2015 under President Putin.

But what is the moral of this story? How do all of these historical instances relate?

They demonstrate a clear pattern of the Western powers using both military and financial pressure to help weaken the Russian state.

Much of it relates to the theories of English academic Sir Halford John MacKinder whose article The Geographical Pivot of History, described Russian territory as a ‘pivot area’ which Western powers must control in order to more easily dominate the Orient. Although anti-Russian sentiments in the West preceded the 1904 publication of MacKinder’s work, his theory proved influential on many, including Adolf Hitler.

Whilst in 1812-1814, and again in 1941-1945, the West came to rely on Russia to contain Western powers who had taken things too far, the truth of the matter is, there is a long history of the West seeing Russia as a monolith to destroy rather than a co-equal in a kind of ‘concert of civilisation”.

Against this background it becomes clear that Donald Trump had the weight of western history on his shoulders. He had to contend with the proclivities of some Catholics and Protestants who remain hateful of Orthodox powers , he had to contend with a British and French imperialist mindset from the 19th century that has re-located across the Atlantic, he had to contend with latent Russia versus Jewish narrative that still holds sway in some parts of the west, he had to contend with the atheist ultra-left who always hated Russia’s conservative Christian traditions and has had to content with the geo-strategic thinking of just about everyone in Washington who are hell-bent in subduing Asiausing Russia as MacKinder’s ‘pivot area’.Against this tide came a seemingly pragmatic Donald Trump who in a more innocent American style said something akin to ‘this world is big enough for the both of us’. It was an idea that Russia and America could co-exist with unique geo-strategic positions without coming to blows. It was an idea for which the entire US political and media establishment have used to try to remove Trump from power and barring that, they are trying to disgrace and weaken the office of President itself, making this POTUS and possibly his successors, increasingly dependent on Congress.

Donald Trump still has time to try and fight for his power and reputation domestically and he still indeed his time to assert his pragmatic world-view into US foreign policy making. The fact is that the road for Trump is long and it may be impossible in the end, not least because however powerless Trump is over Russia, he is even more powerless to stop the US deep states ambitions towards Iran and China, to increasingly important partners for Russia.

At least he tried.