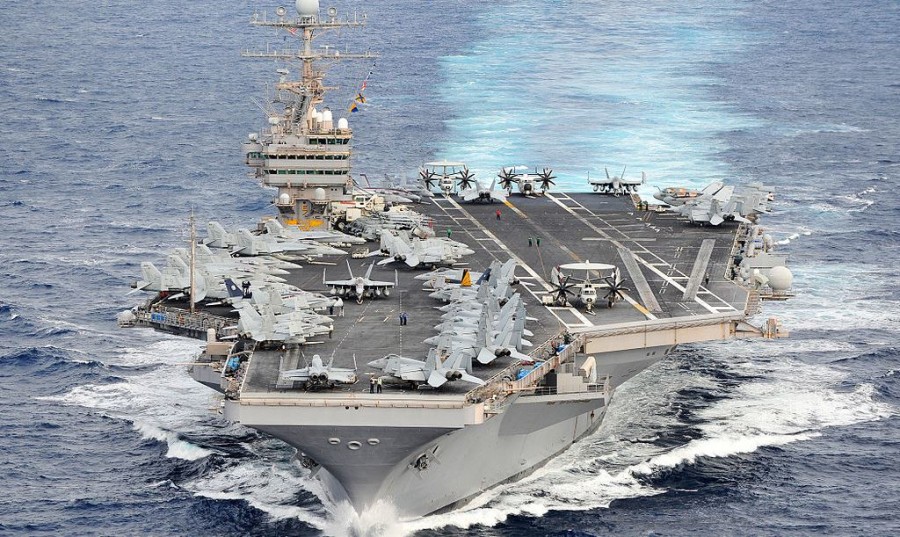 Washington is moving inevitably on a global war plan. That’s the grim conclusion one has to draw from three unfolding war scenarios.

Ultimately, it’s about American imperialism trying to assert hegemony over the international order for the benefit of US capitalism. Russia and China are prime targets for this global assault.

The three unfolding war scenarios are seen in Syria, North Korea and Ukraine. These are not disparate, disassociated conflicts. They are inter-related expressions of the American war plans. War plans which involve the moving of strategic military power into position.

Last week’s massacre of over 100 Syrian government forces by American warplanes near Deir ez-Zor was an audacious overt assault by the US on the Syrian state. The US, along with other NATO allies, have been up to now waging a seven-year proxy war for regime change against Russia’s ally, President Assad. The massacre last week was certainly not the first time that US forces, illegally present in Syria, have attacked the Syrian army. But it seems clearer than ever now that American forces are operating on the overt agenda for regime change. US troops are transparently acting like an occupation army, challenging Russia and its legally mandated support for the Syrian state.

Heightening international concerns are multiple reports that Russian military contractors were among the casualties in the US-led air strike near Deir ez-Zor last week.

Regarding North Korea, Washington is brazenly sabotaging diplomatic efforts underway between the respective Korean leaderships in Pyongyang and Seoul. While this inter-Korean dialogue has been picking up positive momentum, the US has all the while been positioning nuclear-capable B-52 and B-2 bombers in the region, along with at least three aircraft carriers. The B-2s are also reportedly armed with 14-tonne bunker-buster bombs – the largest non-nuclear warhead in the American arsenal, designed to destroy North Korean underground missile silos and “decapitate” the Pyongyang leadership of Kim Jong-un.

American vice-president Mike Pence, while attending the Winter Olympics in South Korea, opening last week, delivered a blunt war message. He said that the recent detente between North Korea and US ally South Korea will come to an end as “soon as the Olympic flame is extinguished” – when the games close later this month. This US policy of belligerence completely upends Russia and China’s efforts to facilitate inter-Korean peace diplomacy.

Meanwhile, the situation in Eastern Ukraine looks decidedly grim for an imminent US-led invasion of the breakaway Donbas region. Pentagon military inspectors have in the past week reportedly arrived along the Contact Zone that separates the US-backed Kiev regime forces and the pro-Russian separatists of the Donetsk and Lugansk People’s Republics. Donetsk’s military commander Eduard Basurin warned that the arrival of Pentagon and other NATO military advisors from Britain and Canada indicate that US-armed Kiev forces are readying for a renewed assault on the Donbas ethnic Russian population.

Even the normally complacent observers of the Organization for Security and Cooperation in Europe (OSCE), charged with monitoring a nominal ceasefire along the Contact Zone, have lately begun reporting serious advancement of heavy weapons by the Kiev forces – in violation of the 2015 Minsk Peace Accord.

If the US-led Kiev forces proceed with the anticipated offensive next month in Donbas there are real fears for extreme civilian casualties. Such “ethnic cleansing” of Russian people by Kiev regime forces that openly espouse Neo-Nazi ideology would mostly likely precipitate a large-scale intervention by Moscow as a matter of humanitarian defense. Perhaps that is what the US planners are wagering on, which can then be portrayed by the dutiful Western news media as “another Russian aggression”.

US-based political analyst Randy Martin says: “It is undeniable that Washington is on a war footing in three global scenarios. Preparation for war is in fact war.”

He added: “You have to also consider the latest Nuclear Posture Review published by the Pentagon earlier this month. The Pentagon is openly declaring that it views Russia and China as targets, and that it is willing to use nuclear force to contest conventional wars and what the Pentagon deems to be asymmetric aggression.”

Martin says that it is not clear at this stage what Washington wants exactly.

“It is of course all about seeking global domination which is long-consistent with American imperialism as expressed for example in the Wolfowitz Doctrine following the end of the Cold War,” says the analyst.

“But what does Washington want specifically from Russia and China is the question. It is evidently using the threat of war and aggression as a lever. But it is not clear what would placate Washington. Perhaps regime change in Russia where President Putin is ousted by a deferential pro-Western figure. Perhaps Russia and China giving up their plans of Eurasian economic integration and abandoning their plans to drop the American dollar in trade relations.”

One thing, however, seems abundantly clear. The US is embarking on a global war plan, as can be discerned from the grave developments unfolding in Syria, the Korean Peninsula and Ukraine. Each scenario can be understood as a pressure point on Moscow or China to in some way acquiesce to American ambitions for global dominance.

To be sure, Washington is being reckless and criminal in its conduct, violating the UN Charter and countless other international laws. It is brazenly acting like a rogue regime without the slightest hint of shame.

Still, Russia and China are hardly likely to capitulate. Simply because the US ambition of unipolar hegemony is impossible to achieve. The post-Second World Order, which Washington was able to dominate for nearly seven decades, is becoming obsolete as the international order naturally transforms into a multipolar configuration.

When Washington accuses Moscow and Beijing of “trying to alter the international order to their advantage” what the American rulers are tacitly admitting is their anxiety that the days of US hegemony are on the wane. Russia and China are not doing anything illegitimate. It is simply a fact of historical evolution.

So, ultimately, Washington’s war plans are futile in what they are trying to achieve by criminal coercion. Those plans cannot reverse history. But, demonically, those plans could obliterate the future of the planet.

The world is again on a precipice as it was before on the eve of the First and Second World Wars. Capitalism, imperialism and fascism are again center stage.

As analyst Randy Martin puts it: “The American rulers are coming out of the closet to show their true naked nature of wanting to wage war on the world. Their supremacist, militarist ideology is, incontrovertibly, fascism in action.”