The Unspoken Consequences of Bombing Syria 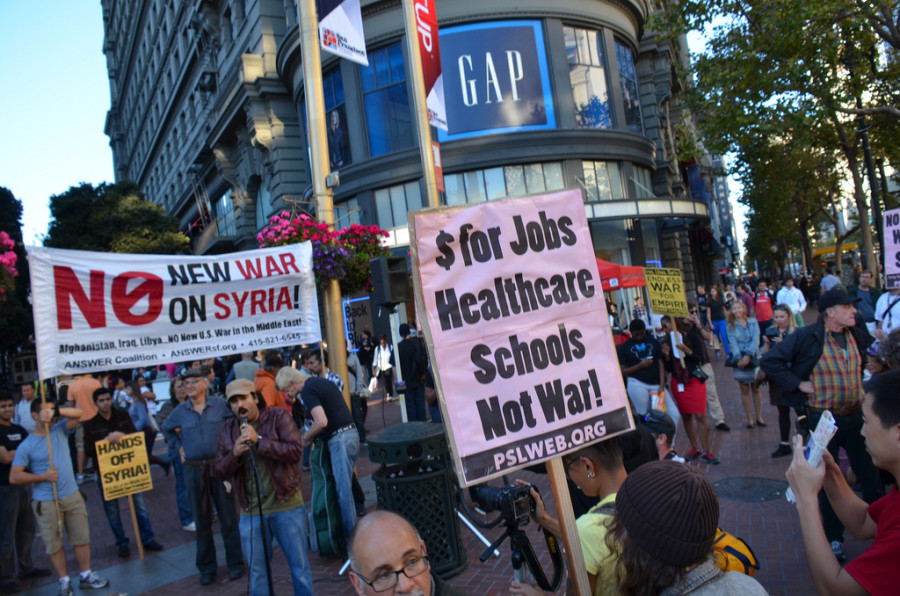 Now that U.S. bombs are falling in Syria, will Islamic extremism be stopped in its tracks? Such a question is an insult to the intellect, yet it’s the dominant theory in Washington D.C., where years of Middle East war have taught politicians nothing.

Bombing yet another Middle East country will create yet more extremists, while broadening an already-existing proxy war in Syria between regional rivals. Obama’s strategy to combat ISIS purposely excludes key players that, if included, could actually help stop the fighting. The strategy of exclusion will thus intensify the regional proxy fight, leading to the likelihood of even deeper US involvement in the Syrian war and a broader conflagration.

Iran, Syria, and Russia were not invited to join the war against ISIS, since the broader regional proxy war is a war between the US and its allies versus Syria, Iran, Hezbollah and Russia.

Syria cannot join the anti-ISIS coalition even though Syria has been fighting ISIS for over two years. Obama’s reason is that the Syrian government has “no legitimacy.” But Obama’s “coalition” of Gulf states are composed of totalitarian dictatorships that, in comparison, make Syria look like the bastion of democracy.

Equally hypocritical is that Obama’s Arab bombing partners are the states most responsible for ISIS’ creation. Saudi Arabia and Qatar are especially guilty of sending money, weapons, and extremist fighters into Syria to topple the Syrian Government, which directly helped transform ISIS from a fledgling group of fanatics into a regional power.

While Saudi Arabia and Qatar were exporting jihadism to Syria, Obama looked the other way, so pleased was he to have an army of foreign mercenaries to help topple Assad. These extremists dominated the Syrian battlefield for nearly three years, and only now is Obama using a couple of beheadings to flood the emotions of the American public.

Obama’s “coalition of the willing” is largely a mirage, since it’s composed of Gulf state monarchies that are completely dependent on US aid, supplying these dictatorships with enough fire power to protect them from their own citizens, who would otherwise topple their “royalty” in minutes.

Further enraging the Gulf state population is their governments helping the US bomb another Arab country; the US is disliked as much as the hated dictatorial monarchies.

To complicate matters more, there are large sections of support in the Gulf states for groups like ISIS, since these governments give institutional support to religious institutions that hold an extremist interpretation of Islam.

In fact, the only thin base of popular support for these dictatorships is religion, which is why these theocratic regimes cannot wage a real war on Islamic extremism – their thin political base will not support their monarchy bombing familial-religious offshoots. Thus, Obama’s coalition of regional lackey dictatorships cannot give too much support – or support such a war too long.

The real danger of bombing Syria is expansion. Once the first bomb explodes the logic of war takes over, usually creating a dynamic of expansion. The US military uses the sanitized term “mission creep” to explain this phenomenon. And the war is already starting to creep; Obama has bombed non-ISIS targets that have enraged some Syrian rebels.

An even larger “mission creep” is easily predictable because Obama’s main strategy to fight ISIS is to arm the rebels who are fighting the Syrian government. The rebels are more interested in fighting Assad than fighting their ideological cousins.

The New York Times recently confirmed this, as they mentioned that Syrian rebels dislike ISIS, but “…ousting Mr. Assad remains their primary goal, putting them at odds with their American patrons.”

Obama himself finally admitted in his U.N. speech that targeting the Syrian government was at least half of his intention by funding the Syrian rebels:

“Together with our partners, America is training and equipping the Syrian opposition to be a counterweight to the terrorists of ISIL and the brutality of the Assad regime.”

Of course, no politician tells the US public that funding the Syrian rebels is being done to attack the Syrian government.

The above New York Times article also mentioned that the US is currently paying the salaries of 10,000 fighters in northern Syria. This is a mercenary army, and thus a manufactured war. The US is paying 10,000 fighters while Saudi Arabia and Qatar have long been paying “rebels” to fight the Syrian government. This cash-flush Syrian mercenary army has artificially expanded the catastrophic Syrian war that Assad would have otherwise won long ago, with tens of thousands of lives spared in the process.

“How soon… before a missile explodes in a Syrian regime weapons depot – by “mistake”, of course – or other government facilities? Since the US has decided to fund and train the so-called “moderate opposition” to fight Isis and the Syrian regime, why should it not bomb both sets of enemies?”

The US politicians understand that the intended outcome of funding the Syrian rebels is regime change, while they tell the American public that ISIS is the only target. The real agenda is quite simple: keeping the Middle East under US control by any means necessary.