The Contrasting Russian/Chinese vs. US models for Geo-Economic Diplomacy by ADAM GARRIE 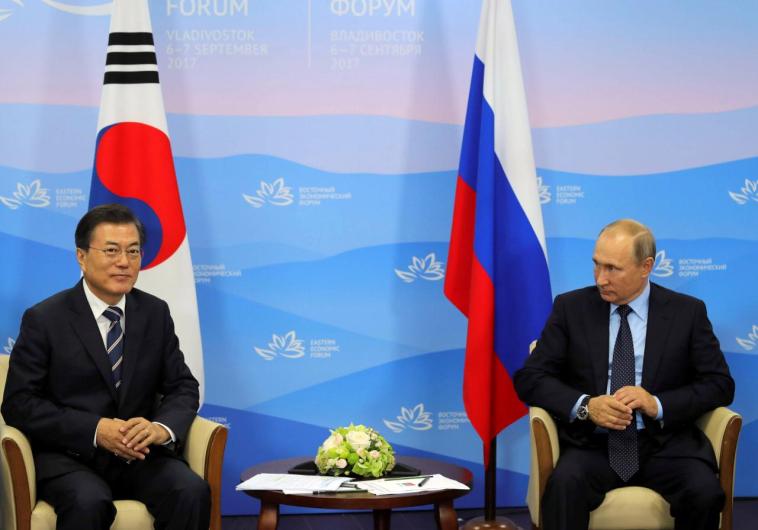 Furthermore and most importantly, he outlined why Russia remains opposed to Washington’s punitive measures and bellicose stance against the DPRK.

The genesis of Russia’s North Korea policy is best apprehended through an understanding of Russia’s diplomatic and economic goals for Asia and the so-called wider ‘Global South’. Russia’s manner of achieving things in the diplomatic arena, is linked indelibly with Russia’s wider geo-economic style of diplomacy. For Russia, peace and cooperation are achieved through initiatives involving economic inter-connectivity. By establishing joint-economic projects, in areas including  energy cooperation and the establishing of new trading zones (free trade or with substantial reductions in traditional tariffs), Russia aims to ease geo-political pressure points through the incentive of prosperity that comes through countries having mutual shares in multilateral endeavours.

In East Asia, Russia continues to expand relations with South Korea, in spite of Seoul’s ties to Washington. It is no coincidence that South Korea is increasingly responsive to Russian diplomatic measures at a time when trade between the two-countries looks set to rapidly expand.

Implicit in the burgeoning relationship between Moscow and Seoul is the prospect for the tripartite economic cooperation initiative between Russia and the two Korean states, that was first proposed by Vladimir Putin at the Eastern Economic Forum held in Vladivostok shortly after this year’s BRICS summit.

Both North and South Korean officials, including President Moon Jae-in attended the meeting. Officials from both Korean states were responsive to Putin’s proposals for joint economic initiatives, including the possibility of energy and logistical transport corridors that would link all thee countries.

At the time and in subsequent statements, the North Korean government said that the only thing prohibiting Pyongyang from embracing the proposals immediately, was continued fears about threats to the DPRK’s security due to increased US military activities in South Korea.

This is why the double-freeze is crucial for the success of such joint initiatives and it is why Russia is in close contact with South Korea regarding the matter. According to the double-freeze, North Korea must halt the testing of new weapons, while South Korea, the US and Japan must do the same, while also ceasing with provocative military exercises in the region.

Russia is clearly attempting to convince South Korea to help and de-escalate joint US military activities in the region, something President Moon Jae-in has been receptive to in the past. In late October of this year, Seoul and Beijing reached an agreement whereby it would appear South Korea has agreed not to receive further US made and operated THAAD missile systems, a key demand from China. As a result, South Korea and China have quickly normalised economic and diplomatic activities, while the contents of the agreement have only been partly revealed.

A similar agreement will need to be struck with Russia, entailing further commitments from Seoul to de-militarise certain aspects of US made armaments in the country, in order for Russia to feel confident in further leveraging the DPRK to reciprocate.

Russia is perfectly clear about how seriously it takes the security concerns in both Korean states and it will certainly take intense negotiations with both sides to reach a point where the double-freeze can take shape.

In many ways, China is now in closer communication with South Korea than with its historic Northern partner. While China remains fully committed to the double-freeze and to joint regional economic initiatives as part of the One Belt–One Road project, China’s relations with Pyongyang are at an all time low. Under Kim Jong-un, Pyongyang and Beijing have failed to see eye to eye on numerous occasions. However, Russia’s relationship with Pyongyang is, if anything, growing stronger and China is happy for Russia to take the diplomatic lead in this area. In this sense, one should not over-hype the strains between Beijing and Pyongyang as the US under Donald Trump is often inclined to do. In reality, as long as Russia continues in its diplomatic discussions with both Korean states and with China, all parties will eventually be satisfied, as each party will be able to air its concerns to a receptive diplomatic partner.

The biggest stumbling block to the entire process is the United States and the reasons for this have everything to do with Washington’s approach to geo-politics and geo-economics. Contemporary US geo-politics, especially in the Trump era, appears to boil down to merely two things:

1. Attempts to create points of tensions along key areas of One Belt–One Road

2. Attempts to exploit as many traditional conflicts as possible, so as to sell more expensive military hardware to traditional partners

Increasingly, these two elements of US foreign policy go hand-in-hand. One sees it in respect of the US arming India and siding with India in its disputes with both China and Pakistan. One sees it in the Middle East where the US continues to sell expensive weapons to Saudi Arabia while encouraging Riyadh’s anti-Iranian rhetoric. One sees it  in South East Asia where the US is openly trying to stand in the way of would-be rapprochement between Vietnam and China and of course, one sees it in East Asia where Trump has touted weapons sales to Japan as a means of ‘containing’ North Korea.

Far from de-escalating conflicts, the US model of geo-economics seeks to exploit conflicts for the sake of weapons sales. Nowhere is this more true than in respect of the Korean crisis, where one of the world’s longest standing frozen conflicts has heated up due to the US rhetoric against North Korea which seemed to spontaneously become highly aggressive starting in April of 2017.

Russia has far fewer economic ties to the United States than China. Russia’s goal therefore is to use diplomatic skill to try and convince the US to be a less obstructionist power in the aforementioned conflicts. As this is likely to fail, Russia looks increasingly to built its economic relations with traditional US partners and in doing so, show the United States that the zero-sum mentality which is implicit in its foreign policy, is not economically prudent and mutually beneficial in the long term.

This strategy involves helping traditional US partners, who often act as though fully dependant on the US, to achieve and more independent and consequently balanced foreign policy, thus giving these states their own form of leverage to use against the authoritarian style of US foreign policy.

Russia’s relationship with South Korea is a demonstrative of such a policy. With this context in mind, the following are the key highlights from Igor Morgulov’s speech in South Korea.

“Unfortunately, I have to say that the apocalyptic version of developments in this region exists and I very much hope that there will be enough common sense among the regional community to prevent this negative scenario from happening….

…I do not think that the tightening of pressure would lead to the results, which the authors of such policy expect. I am sure that if the goal is to make North Korea to abandon nuclear weapons and missile programs, it would be the last thing which North Koreans will give up as a result … further strengthening of sanctions against North Korea may lead this country to the brink of humanitarian crisis…

…Does someone believe in illusions that the words of the US President on ’fire and fury’ attack or constant North Korean threats to turn magnificent city of Seoul into ‘sea of flames’, does someone really think that these threats could cut the knot, which for so many years have been tied around the peninsula? We would be naive to think that any of the sides in this confrontation is going to give in under pressure…

…What theme of talks could be proposed in the first place? It is very simple: the principles of peaceful coexistence. I’m sure that that the lack of such an agreement on principles of mutual coexistence sparks mutual mistrust and bad blood [between the United States and North Korea]…

…The alternative to dialogue and negotiations does not exist. But in order to start this dialogue, it is important to first of all slow down and breath out, as they say…

…We have presented the points of this roadmap to both sides [North Korea and the United States], I want to note that this plan has not been dismissed right away, neither in Washington, nor in Pyongyang…

…Moreover, we have engaged in discussion of some elements of this plan separately with the United States and with North Korea, which shows that a discussion based on this suggestion is possible. The work began, but, unfortunately US actions in October-November, I mean the military drills, have seriously impeded our dialogue on settlement based on this roadmap…

…We believe that on the second stage of roadmap implementation the intra-Korean dialogue could be resumed. We know that our South Korean friends are ready for such work and hope that the North will also show interest…

This speech represents Russia’s most clear indication that it indirectly, yet unambiguously blames the US for obstructing the joint-economic initiatives between the two Korean states and Russia and that the prolonging of such tensions can only be mutually detrimental to all sides. While Russia still must convince the US down from its obstructionist position, it is clear that when it comes to offering practical, workable and mutually beneficial proposals for East Asia, Russia is taking the diplomatic and economic lead. http://theduran.com/the-contrasting-russianchinese-vs-us-models-for-geo-economic-diplomacy/