Taiwan and Norway sign up to AIIB, China welcomes Taiwan under Appropriate Name 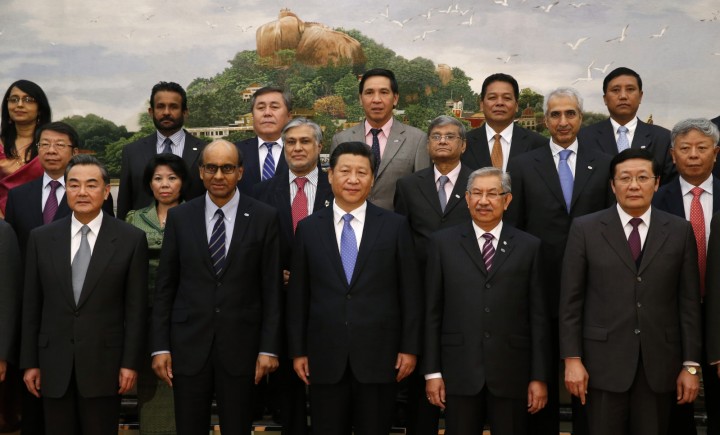 6 hours ago
Asian developments: the US fears the Asian Infrastructure Investment Bank could undercut American influence in the region
Taiwan and Norway are to join the new Asian Infrastructure Investment Bank (AIIB).
They become the last countries to apply to the China-led bank before the Tuesday deadline.
They join more than 40 members, including Australia, South Korea, Britain, France, and Germany that have signed up to the development bank.
The US and Japan have refused to join, with both countries worried about standards of governance.
There are also concerns over whether loans will carry adequate environmental, labour and social safeguards.
The AIIB will help finance construction of roads, ports, railways and other infrastructure projects in Asia.
It was launched with 21 members in October, and will have an initial capital of around $50bn, with China expected to be the biggest stakeholder.
The Beijing ceremony to launch the AIIB in October
The original 21 members launched the AIIB in Beijing in October
Partnership
The US has asked that the bank should work in partnership with existing institutions such as the Asian Development Bank (ADB) and International Monetary Fund (IMF).
Many believe the US’s real concern is that the AIIB will undercut the IMF and World bank and increase China’s influence in the region.
The ADB is traditionally headed by a Japanese official, while the IMF and World Bank are dominated by the US.
Japan’s Chief Cabinet Secretary Yoshihide Suga told reporters that Japan is still seeking answers about how the AIIB would be governed.
He said: „As of today, Japan will not join AIIB and a clear explanation has not been received from China.“
Founding members who apply before the Tuesday deadline will have the right to create the bank’s governance and operational rules.
Countries that join after the deadline will have voting rights, but less say in making the rules.
Politics
Both Taiwan and Norway’s applications have political complications.
Taiwan is applying as a country although China has, since 1949, recognised it only as part of its own territory.
China’s Foreign Ministry spokeswoman Hua Chunying said Taiwan’s application should respect China’s requirement that the island not be identified as a separate country.
Beijing cut all high-level ties with Oslo after the Nobel Peace Prize went to Chinese dissident Liu Xiaobo in 2010.
However, Norway’s Foreign Minister Boerge Brende said: „Norway is a substantial contributor to global development efforts, and wishes to join countries from Asia and other parts of the world in further refining the structure and mission of the AIIB,“
The total number of founding members will be confirmed on 15 April.

„The AIIB is open and inclusive,“ Ma said. „We welcome Taiwan to participate in the AIIB under an appropriate name.“

Most countries, including the United States, do not recognize Taiwan due to pressure from China. Taiwan is not a member of the United Nations, the World Bank or the International Monetary Fund.

However it is a member of the Asian Development Bank under the name of Taipei,China.

The United States has urged countries to think twice about joining the AIIB until it could show sufficient standards of governance and environmental and social safeguards.

China views Taiwan as a renegade province and has not ruled out the use of force to bring it under its control. However, since Taiwan’s current president Ma Ying-jeou took office in 2008, enmity has declined considerably and the two sides have signed a number of trade and investment deals.