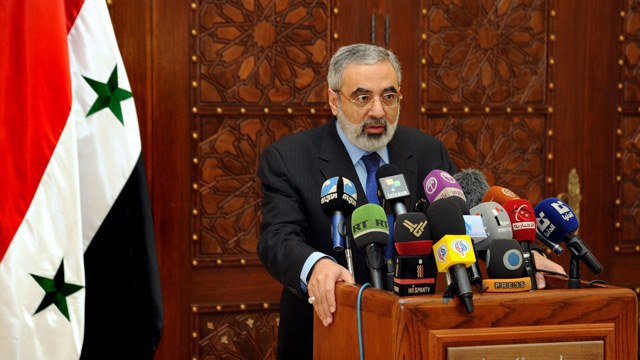 22/10/2014 al-Zoubi
Damascus, SANA Information Minister Omran al-Zoubi reiterated that combating terrorism in the region and in Syria in particular cannot be carried out without coordination with the Syrian state and leadership.
“Syria is going ahead with countering terrorism till the end,” regardless of it not being part of the recently formed US-led international coalition to fight terrorism or not being coordinated with in this regard, al-Zoubi stressed in an interview with the Syrian TV satellite channel broadcast on Tuesday.
In his comments on the situation in Ayn al-Arab city, on Syria’s northern border with Turkey, which the terrorist organization of the Islamic State of Iraq and Syria (ISIS) has been trying to seize control of for weeks, the Minister affirmed that the city is part of the Syrian territory and its people are “our people.”
The Syrian state has not hesitated to practice its military, political, social, economic and humanitarian role towards all parts of the Syrian land “from the smallest village to the largest city,” al-Zoubi stressed.
He made it clear that the Syrian state through its armed forces and aircraft has offered military and logistic support and weapons to Ayn al-Arab city, and “it will continue to do so with maximum capability.”
While affirming Syria’s support to Ayn al-Arab, the Information Minister asserted that “not an inch of the Syrian territories will be cut off in favor of no one, neither terrorist gangs or groups, nor states or entities.”
In response to the Turkish President’s statements about establishing buffer zones in Syria and about Ayn al-Arab being a strategic area for him, al-Zoubi reiterated that the city in question is “part of the Syrian land and a Syrian city and not part of the Turkish land, and this should be clear to everybody.”
With regard to claims that terrorist factions are not linked and the international coalition’s refraining to fight terrorist organizations other than ISIS, al-Zoubi said all the organizations, including ISIS and Jabhat al-Nusra, are linked and they operate with coordination among them, stressing that “the pretext that these factions are separated is unconvincing, inconceivable and not realistic.
H. Zain/H. Said

No More Brainwashing Into Fascism* and War!