Thank You Letter To Putin and Assad For Anti-Terror Measures 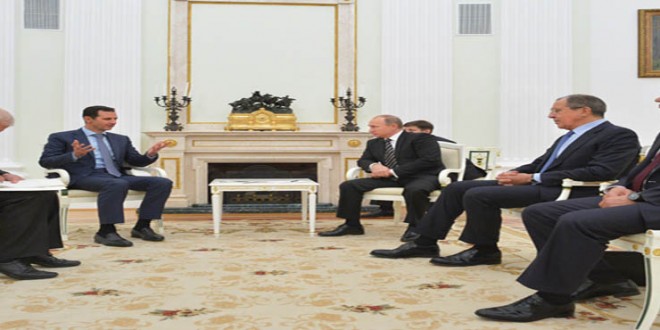 As members of the global reality-based community, we’d like to extend our appreciation and support for the Russian Federation’s decision to provide humanitarian and military assistance to Syria, its armed forces and its democratically elected leader, President Bashar al-Assad, in their fight against international US-backed terrorists.
The launch of airstrikes directed against ISIL terrorists in Syria comes at a critical time,1 just as did Russia’s pivotal role in preventing a Western military intervention in 2013. As a voice of reason and a force for justice, you have the thanks and support of Syrians, Russians and all people of conscience around the world.
Since 2011, Western leaders have been determined to turn Syria into a failed state. They have gone to the extent of providing funding, training and weaponry to foreign mercenaries who have waged a brutal campaign of terror on the Syrian people and their legitimate government.2 These terrorist forces and religious fanatics do not represent the will of the Syrian people, the majority of whom support President Assad. As you said in your speech at the United Nations General Assembly, it is for the Syrian people and only the Syrian people to decide who should lead them.
In 2013, when the West was primed to launch a military campaign on Syria, Russia stepped in to broker a peaceful, diplomatic solution. In a sane world, this would be the natural response to international problems, and Russia would not stand alone. Unfortunately, the West continues its dead-end policy of supporting violence, coercion and illegal intervention in the affairs of sovereign nations.
While the West pushes for destabilization, war and chaos, Russia stands firm in its commitment to dialogue, cooperation, international law and order. Your reaction to the crisis in Syria demonstrates exactly that.
Like you, President Assad has proven himself to be a man of intelligence, courage and good will. And like most public figures who possess such qualities, he has been relentlessly defamed and slandered by Western governments and media. One example is the Houla massacre in May 2012, in which 108 Syrians were killed, including 49 children. The Syrian military was blamed for this atrocity but it was later revealed that the massacre was perpetrated by forces aligned with the US-backed ‘Free Syrian Army’ (FSA), and that the victims were supporters of the Syrian government.3 Later in 2012, the FSA was observed killing kidnapped civilians and off-duty soldiers.4
This is the ‘moderate opposition’ group that Western government officials support in their illegal aggression against Mr. Assad, and whom they now accuse Russia of targeting with airstrikes. These facts and others show clearly that the US government and its allies merely profess to fight terror when in fact they directly create and support it in a futile attempt to secure US global hegemony. They do this without the support of the United Nations and without the support of the legitimate governments of the countries they attack.
The second Secretary-General of the United Nations, Dag Hammarskjold, whom John F. Kennedy considered the greatest statesman of his time, clearly saw the problems facing not only the UN, but the world at large. In 1958 he wrote:
“The conflict to different approaches to the liberty of man and mind or between different views of human dignity and the right of the individual is continuous. The dividing line goes within ourselves, within our own peoples, and also within other nations. It does not coincide with any political or geographical boundaries. The ultimate fight is one between the human and the subhuman. We are on dangerous ground if we believe that any individual, any nation, or any ideology has a monopoly on rightness, liberty, and human dignity.”5
We are on dangerous ground. The United States’ self-professed monopoly on rightness, liberty, and human dignity has led to wrongness, oppression and suffering on a massive scale. The Western mentality on display in Libya and Syria is truly subhuman6 — psychopathic7 — embracing the basest aspects of human nature.8
Naturally, the subhuman is reflected in the results of U.S. policy in Ukraine and Syria. In Ukraine, neo-Nazis are members of Parliament and form battalions which have tortured and murdered men, women and children in the Donbass, with the sanction of the government in Kiev. In Syria, the West’s policy of destruction and the support of terrorism have resulted in ISIL and other terror groups whose methods are publicly condemned but privately supported by Western leaders.9 This is not the vision humanity is desperate to embrace. This is not the vision we seek.
As long as world leaders continue to submit to the will of political psychopaths, humanity will never build a world of peace.10 We pray that more people will follow your example, by speaking truth to power, by acting firmly on their convictions and by refusing to be controlled by fear and ignorance. We hope that by doing so, we may all do our part to create a truly multipolar world free from the destructive influence of psychopaths and fanatics, and the toxic political structures they create that make peace impossible.
Sincerely,