St. Petersburg Economic Forum: What Made it Stand Out This Year? ALEX GORKA 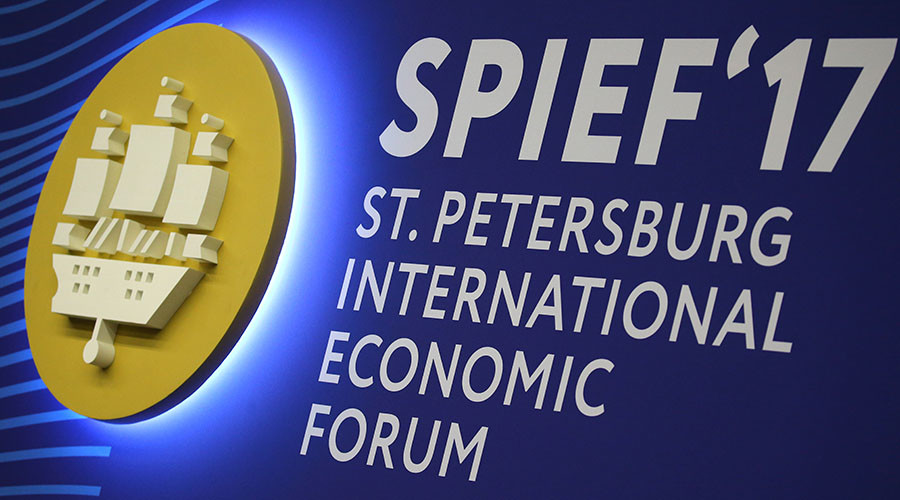 Russian President Putin met with over 40 heads of sovereign funds from 23 countries, collectively managing $11.4 trillion. The participants discussed a lot of ideas for investing, such as the creation of a joint fund between Russia and China which would enable to invest in Chinese currency. More investment from China is expected during the Chinese President’s visit to Moscow in July. The possibility of Russia becoming a vital logistical hub between Asia and Europe was an issue to top the agenda. India, a forum guest country this year, and China each brokered lucrative energy, nuclear, arms, rail and aviation deals with Russia at the forum. Some European energy firms intend to resume their ventures in 2017 with the help of a grandfather clause in the EU law.

Addressing senior US business executives on June 2, the Russian president urged them to work with President Donald Trump’s administration to improve relations between the two countries. He noted that good US-Russia relations served the interests of both nations. «Help us restore normal political dialogue», Putin said. «I ask you on behalf of Russia and I address the American side: help the new president and the new administration».

The Obama administration had quietly cautioned major US firms from attending the Russian forum. It was different this time with no cautions coming from Donald Trump. Daniel Russell, the head of the US-Russia business council, when asked if US companies were feeling less pressure from the administration to stay away, said: «I think that’s right. Some of the companies, particularly in 2015, received calls from the US government not to attend and I think that attitude has certainly changed».

US ambassador to Russia John Tefft was present at the event. No US ambassador attended in 2014, 2015 or 2016. Kirill Dmitriev, chief executive of the Russian Direct Investment Fund, a state body that works with foreign investors, noted that US and Canadian presence was numerically bigger than in previous years. «There is a better understanding (among foreign investors) that sanctions really did not work, the Russian economy continues to grow, Russia represents an attractive market and people should work with Russia», he told Reuters.

A total of 560 US participants represented 140 companies. Exxon Mobil Corp., Chevron Corp. and Boeing Co. were all in attendance. There were enough American companies to run Business Dialogue Russia-USA – a separate US-Russia roundtable held for the first time in the forum’s history.

Several US delegates said that, politics aside, they were drawn to the forum by the fact the Russian economy had returned to growth after a slowdown. The punitive measures imposed in 2014 over Ukraine are the only snags on the way to making profits.

Actually, unable to undermine Russia’s economy, the sanctions do not work. Russia’s GDP is growing for a third consecutive quarter. This year, investment growth into Russian economy exceeds GDP growth. According to President Putin, investments during the first quarter were up 2.3 percent overall.

The inflow of foreign direct investments into the Russian economy amounted to $7 billion in the first quarter. Notably, this is the best number for the corresponding period over the past three years. The economy grew by 1.4 percent in April. Car sales and mortgage loans are on the rise. Inflation is expected to be fewer than 4% by year-end.

Last year the Russian stock market rallied as oil prices stabilized and the country showed signs of returning to growth. A third of the 15 best-performing funds in the world in 2016 were special funds investing in Russia equities.

The World Bank forecasts that the Russia’s economy is expected to grow from 2017 onwards. Its recent semi-annual report says the Russian gross domestic product is to grow by 1.3 percent in 2017 and by 1.4 percent in 2018 and 2019. The World Bank said rising consumption and a recovery in investment activity would drive Russia’s economic growth, citing the 2018 soccer World Cup that Russia is set to host as giving a potential boost to public investment.

According to Idriss Jazairy, Special Rapporteur on the negative impact of the unilateral coercive measures on the enjoyment of human rights, sanctions against Russia fail to achieve the desired result and cause more damage to countries imposing them than the targeted country itself. The Western countries have lost over $100 billion over three years from the sanctions applied against Russia over the Ukrainian crisis, compared with up to $55 billion lost by Russia. According to Jazairy, the cost in terms of income loss for source countries resulting from the sanctions is about $3.2 billion per month.

Big retailers like Sweden’s Ikea Group and France’s Leroy Merlin SA have begun pumping billions of dollars in new stores and factories in Russia. Many US companies run their businesses there. Boeing has been in Russia for decades. About six years ago, it announced plans to invest $27 billion over the next 30 years. Ford has been operating in the Russian Federation for 14 years. In launched four new vehicles produced on Russian soil in 2015. Caterpillar, Pepsi, Procter&Gamble, McDonald’s, Mondelez International, General Motors, Johnson & Johnson, Cargill, Alcoa, and General Electric – all these American companies operate in the country.

Overall foreign investments to Russian commercial real estate over the past 10 years have reached $15.9 billion. US companies account for 36.5 percent of the total sum.

The positive views on Russia are a big change from 2014. Business interests and the sanctions policy diverge. It’s rather symbolic that US Senate Committee on Banking, Housing and Urban Affairs Chairman Mike Crapo (R-Idaho) and Ranking Member Sherrod Brown (D-Ohio) announced a bipartisan agreement on legislation to strengthen and expand current US sanctions against Russia on June 1 – the date the SPIEF kicked off. The bill evidently runs counter to the business community aspirations.

The EU plans to prolong the sanctions on June 23 hurt the interests of European companies. The bloc faces slow growth or even stagnation at a time lucrative prospects are looming in Russia. Evidently, keeping the punitive measures in place despite their apparent uselessness has nothing to do with “America First” or “Europe First” policies. Over and over again, North America and the EU shoot themselves in the foot by depriving their businesses of the opportunity to make good deals which US President Trump has talked about so much.