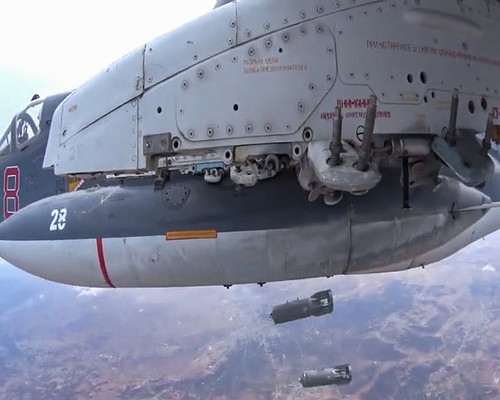 Russia’s active intervention into the events in Syria has given rise to all manner of speculation about both the reasons behind it as well as Moscow’s goals. During the first days of the attacks by Russia’s Aerospace Defense Forces and Navy on Islamic State (IS) positions inside Syria, it seems as though the political commentators hashed over everything – from Moscow’s desire to prop up the regime of the Middle East’s «last dictator» – Bashar al-Assad – to Russia’s use of Syria as a test site for their latest weaponry.

Speak on the CBS program 60 Minutes, Barack Obama tried to convince his listeners that «Mr. Putin now is devoting – his own troops, his own military [into Syria – YU. R.], just to barely hold together by a thread his sole ally». Which, according to Obama, is evidence of the Russian president’s weakness.

However, no matter what Obama has said about this alleged «weakness», once the first Russian barrages began, his administration shut down the Pentagon’s $500-million program to train and arm the «moderate» Syrian opposition. It became clear that once Russian airmen and sailors joined the fight against IS, any further money spent supporting the armed Syrian opposition would only be squandered.

Russian President Vladimir Putin quieted all speculation about the purpose of Russia’s intervention into the events in Syria during an Oct. 11 interview with the journalist Vladimir Solovyov. «Our task… is to stabilize the legitimate government and to create a conducive environment for political compromise», he stated.

In the first place, Russia’s actions in Syria are in full compliance with international law and are being taken at the official request of the Syrian government – unlike all the other countries that are interfering in Syrian affairs without any legal basis. Second, Russia’s actions are based on the premise that Syria’s ultimate fate should be up to the Syrian people and not Western powers that have appropriated the right to determine the nature of Syria’s political regime. Third, the Western coalition’s fight against the Islamic State terrorist organization has thus far been nothing but a sham, which is unacceptable.

«Everything that is taking place [in Syria – YU. R.] in the air or on the ground is not spontaneous action, but the implementation of plans prepared in advance», claimed Vladimir Putin. «We did a lot of close, long-term intelligence gathering from space and from the air, and then we analysed all of the information obtained through various channels. Our General Staff specialists, working in coordination with our Syrian partners and other countries in the region have established an information centre in Baghdad, as you know. The data exchanged through this centre has added to our overall information».

For several years Russia has urged the West to face the truth and admit that the so-called «Arab Spring» has led to bloody chaos, death, and has forced hundreds of thousands of people to flee their homes, as well as contributing to the rise in terrorism under the banner of Islam and an unprecedented escalation in interethnic and interreligious conflicts. And the emergence of the Islamic State has been the cherry on top of the Arab Spring. Given this backdrop, Syria, led by President Assad, is a lone island in a region where a difficult and intransigent war is being waged against an international terrorist movement. Assad’s removal would potentially give terrorists the upper hand in the Middle East, allowing them to fan out to every corner of the globe, from Europe to China. Supporting Assad means rooting out this nest of terror.

During the UN General Assembly in New York, Vladimir Putin seems to have managed to confound Barack Obama’s insistence that the Syrian leader should immediately withdraw from the political arena. However, the US and its allies are proving unable to take the next step recommended by Putin – «to join our efforts and thereby legitimize their own actions in Syria».

Fortunately the US military understands the danger of inadvertently taking a course of action directly at odds with Russia’s, and so in order to avoid misunderstandings, operational contacts have been set up between the two countries’ defense departments.

Turkey is still working to weaken the current anti-terror coalition consisting of Russia, Syria, Iran, and Iraq by launching air strikes on the Kurdish armed forces that are fighting against IS. And it’s true that the actions of the Russian Aerospace Defense Forces have objectively limited the scope of the Turkish and American air operations.

According to Yaakov Kedmi, the former head of the Israeli intelligence agency Nativ, a Syrian army that is on the offensive will be able to accomplish a key objective of the first phase of the confrontation – to regain control of the Syrian-Turkish border, which will make it possible to halt the influx of weapons and manpower from Turkey intended for the terrorists. It will be far easier to defeat those who remain, if they are not getting reinforcements of new combatants. «And then the anti-ISIL operation will begin moving toward Iraq», suggests Mr Kedmi. «There’s a good reason Russia’s coordination center was established there in Baghdad».

As we see, some of the Iraqi politicians are already making the suggestion that the Russian Aerospace Defense Forces should be invited to attack IS headquarters, strongholds, and warehouses located inside Iraq itself.

Russia’s actions in Syria could do more than just radically alter the course of the war on terror. They are bringing Moscow back to the region where for decades its voice was not only influential, but at times critically important (the 1956 Arab-Israeli conflict springs to mind, as one example).

The mission Russia has undertaken to stand up to IS has manifestly polarized the global community. There are a growing number of countries that see that Russia’s actions could spell hope for a turning point in the fight against international terrorism. And the opponents of Moscow’s policy are becoming quite visible as well. We «will not agree to cooperate with Russia so long as they continue to pursue this mistaken strategy», stated US Secretary of Defense Ashton Carter on Oct. 7. That is understandable: after all, Russia’s dynamic moves to battle IS are dooming all attempts to isolate it internationally as the West is trying to do, as retaliation for Crimea and the Donbass.