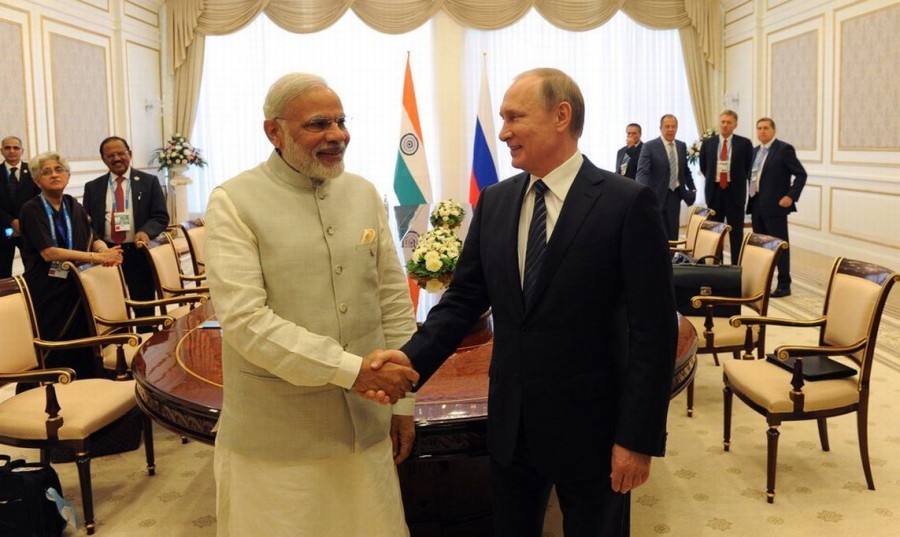 This year, Russia and India mark the 70th anniversary of diplomatic relations. Indian Prime Minister Narendra Modi visited St. Petersburg to meet Russian President Vladimir Putin on June 1 and take part in the St. Petersburg International Economic Forum (SPIEF) on June 2. The two leaders signed the St. Petersburg declaration. This was the fifth Putin-Modi meeting in the recent three years since the PM took office. The global order is going through deep transformation. There are several world leaders who define the shaping of the new world. No doubt, Putin, and Modi are among them, as well as Chinese leader Xi Jinping.

Narendra Modi, 67, has greatly intensified efforts to make his country stronger, more independent and more united. India, like China, is a world economic leader with a very sophisticated cultural and political structure. The country is unique and different from others in many respects. It enjoys a wealth of historical experience, often incomprehensible to those who belong to the West. China enjoys over 3,000 years of uninterrupted statehood. It has its own rich and very specific traditions of state governance. India and China exert great influence on global trends.

It’s a well-known fact that Russia (the Soviet Union) and India have always enjoyed a very close relationship with cooperation thriving in all spheres, including military ties. It’s also a known fact that many things bedevil the India-China bilateral relations, despite the fact that the two civilizations coexisted and had warm relationship for thousands of years, regardless of which dynasty or empire had the greatest amount of power in either country. It was India where Buddhism came to China from.

The two neighbors fought a short border war in 1962 and since then a sense of mistrust has consistently dogged their ties. In 1998, then Indian Defence Minister George Fernandes designated China as India’s „potential enemy No 1“ before the country launched the second round of nuclear tests. Unlike Russia, China has so far not supported India’s pitch for permanent membership of the United Nations Security Council. While Russia has grown increasingly close with China, India still distrusts China due to an unresolved border dispute and rivalry over influence in Asia.

India is concerned over the prospect to be surrounded by China. The Chinese influence on Sri Lanka does not make New Delhi happy and the China-Pakistan ties are a special concern, as well as China’s growing military presence at the strategic Gwadar port in southwest Pakistan and military logistics base in Djibouti in the Indian Ocean.

Gwadar is a deep-sea port next to the Strait of Hormuz, the key oil route in and out of the Persian Gulf, built with Chinese funding and operated by mainland firms. The port connects the $46 billion China-Pakistan Economic Corridor (CPEC) through Pakistan-held Kashmir with China’s Xinjiang. The expansion is planned to protect China’s maritime lifelines. Beijing will depend on this route in case the U.S. uses its naval power to block the Strait of Malacca – the route Chinese economy heavily relies on.

But India views China’s presence in Gwadar as confirmation of China’s plans to encircle it. The fact that the projects envision using the territory in Kashmir’s disputed areas that India considers its national territory greatly complicates things. India objects to China’s Belt and Road Initiative (BRI). The Narendra Modi government’s boycotted the BRI Forum in May.

The idea of Russia, China and India joining together in an alliance started to float in late 1990s. Yevgeni Primakov, then Russian Foreign Minister, drafted the concept of the strategic triangle as a counterbalance to the influence of the West. He argued that a Russia-India-China (RIC) troika in a multipolar world would allow some protection for free-minded nations not allied with the West. It led to the creation of BRICS to unite the same countries and Brazil but this group mainly focused on global, not regional problems.

The US concept of the Greater Middle East from Afghanistan to Maghreb and the way Washington handled the problem of Iran’s nuclear program ran counter to Russian, Chinese and Indian interests to be protected by the Shanghai Cooperation Organization created in the 1990s to stabilize the situation in Central Asia. The group’s membership and influence are growing to encompass more geographic areas. The three countries already cooperate on Afghanistan. Under Xi Jinping China has shown considerable interest in forging an Asian order that would exclude the United States. By bringing India into this order, Beijing can make this goal closer.

Russia has a good understanding of the situation. It has no magic wand to wave and dissipate the existing mistrust and fears but it can mitigate tensions. This is a pivotal goal of its foreign policy. That’s why Moscow pushes ahead the process of India joining the SCO as a full-fledged member so that it could play the role of moderator and mitigate the contradictions between India and China. It’s important to note that New Delhi and Beijing refused to condemn the Crimean reunification with Russia in 2014 and as BRICS members they came out in support of Russia‘s participation in the following G20 summit in Australia that took place the same year.

Moscow has no reason to take sides; it wants close partnership relations with both. It can do it, because the existing differences are not insurmountable. India and China are not divided by geopolitical contradictions of fundamental nature, to the contrary, both states strive for a new world order. Russia is unique being a Eurasian power trusted by China and India; it can make a significant contribution to bringing them together.

Moscow strives for a common Eurasian economic space and it’s essential that India and China patch up their differences. According to Akhilesh Pillalamarri, an international relations analyst, editor, and writer, the relationship between Russia and India is the closest thing to an «all-weather» relationship. He notes that «If any country can bridge relations between China and India, it is likely to be Russia».