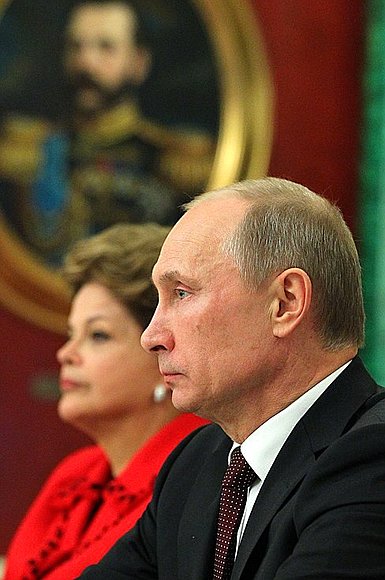 During his visit to Brazil last summer, Russian President Vladimir Putin stated that “Russia and Brazil share common approaches to key global challenges.” This conclusion was substantiated once again in mid-September, at the first Russian-Brazilian Economic Forum and the meeting of the Russian-Brazilian High-Level Commission on Cooperation, which was attended by Russian Prime Minister Dmitry Medvedev and Brazilian Vice President Michel Temer.

Russian Prime Minister Dmitry Medvedev noted: “Brazil is our strategic partner in Latin America. Our relations are based on a long history, mutual respect and trust. We have a shared vision of the current situation in international relations. We work together in various international formats, including BRICS.” In particular, he claimed that Brazil has become one of the most important suppliers of agricultural and food products to the Russian market.

In the near future there are plans to expand Russian-Brazilian trade by at least 50% per year – up to $10 billion – and to do so primarily by increasing Brazilian imports of Russian industrial equipment, and in turn, Russian imports of Brazilian agricultural products, especially beef. In addition, the Brazilians plan to provide technology and investment in order to develop Russian facilities for the advanced processing and long-term storage of meat primary products.

But of course the two countries are expanding their cooperation far beyond agriculture. Russia and Brazil have agreed to work together in space and to harness nuclear energy for peaceful purposes. The Brazilian delegation, led by Michel Temer, affirmed the growing demand for Russian technology and investment in at least ten sectors of the national economy. An agreement was signed to construct the third Russian SM-GLONASS navigation station in Brazil. The two parties also agreed to increase Brazilian imports of Russian helicopter equipment and other military related technologies.

The fruits of the Moscow negotiations reflect the general inclination of the business community in Brazil – which has one of the world’s largest economies – to deepen its partnership with Russia. In his speech at the Russian-Brazilian Economic Forum, Michel Temer noted the growing interest on the part of Brazil and Brazilian businesses in the economy of not only Russia, but also all of the Eurasian Economic Union. They are particularly enthusiastic about technology related to industry, energy production, and the development of transportation infrastructure, including seaports. A mutually beneficial trade and investment partnership in these sectors will be more actively developed.

According to experts in the national chambers of commerce, Brazilian investment in Russia could potentially reach the level of 15 billion USD, and the Russians could sink at least $25 billion into Brazil. The primary sectors already designated for infusions of capital are: transportation, energy infrastructure, forestry, environmental preservation, and the chemical and food industries.

Rosrybolovstvo and the Brazilian Ministry of Fishing and Aquaculture have an agreement in place to support joint projects in the fishing industries of both countries. A decision was made to create a bilateral working group to pursue such projects.

Russian-Brazilian ties have also been bolstered by the fact that Western businesses in recent years have reduced their investments in the high-tech industries of the Brazilian economy, which continues to compete even more successfully with the West. According to estimates, sales of high-tech Brazilian products to the West increased by about one-third between 2000 and 2014.

Russia’s economic presence in Brazil is evident from the approximately 20 joint projects that are either planned or already underway there. Both countries, for example, are currently grappling with the challenges of the integrated economic development of remote regions – Eastern Siberia/the Russian Far East and the Brazilian Amazon, respectively. The prospects for expanding investment and technology ties look very promising (about a dozen joint projects are planned in this area alone).

In addition, Brazil is a global leader in the comprehensive utilization of waste from the food and forestry industries. This is particularly notable when it comes to transportation: for example, more than half the automobiles in Brazil today can run on biofuel (a mixture of fuel oil and ethanol). According to many Russian and Brazilian experts, this expertise can be in high demand in Russia.

It is also noteworthy that up to 70% of the Russian goods exported to Brazil and throughout Latin America are highly technical and scientific products – in contrast to the traditional Western imports from Russia, which consist almost exclusively of raw materials…

It is very significant that Russia and Brazil are currently investigating ways to begin mutual settlements in national currencies. As Aleksei Likhachev, Russia’s Deputy Minister of Economic Development, stated at the Russian-Brazilian forum, each day it becomes increasingly more urgent to utilize national currencies. “This, on one hand, is due to sanctions that are being imposed against a number of Russian companies, and on the other because national currencies‘ fluctuations against the dollar create additional risks and imbalances in foreign trade,” Likhachev explained. Michel Temer expressed a similar opinion. A working group on cooperation in finances and banking is reviewing the issues related to expanding the use of Russian and Brazilian national currencies when the two countries settle their accounts.

It must be emphasized that Brazilian financial institutions are specifically interested in increasing the export of funds intended for loans and investment in national currencies. The Russian Central Bank is currently studying the practical challenges associated with the transition to the use of the Russian ruble and Brazilian real, so they would be no longer pegged to the US dollar.