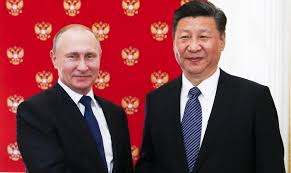 More than twenty agreements have been signed between Russia and China, amounting to almost twelve billion dollars worth of investment. Such figures are reflective of these two nations that define their bilateral relations as the most balanced and fundamental in the world, evidenced by the unprecedented levels of relations between Moscow and Beijing. The ease with which complicated and wide-ranging agreements are realized emphasizes the level of confidence and development cooperation developed personally by Putin and Xi Jinping. In their third annual meeting, the most prominent themes on the agenda were also discussed with a view to the upcoming G20 meeting. The intention is to coordinate the next steps together on the world stage in order to express a common point of view on many themes, mutually reinforcing their positions in the process. This is the case with matters to do with Syria and North Korea.

With regard to international tensions, the G20 in Hamburg will finally see the most anticipated meeting of the year, that between Donald Trump and Vladimir Putin. The topics to be discussed have not been revealed by the White House or the Kremlin, but Syria and North Korea are likely to be at the center of talks. In this sense, the meeting between Putin and Xi Jinping assumes a very powerful symbolic value: Trump and the rest of the world are aware that talking with Moscow about the events in North Korea means taking Chinese considerations into account, while discussing Syria with Beijing necessarily takes Russian concerns into account. Moscow and Beijing intend to mutually support each other in negotiations with Washington in order to strengthen their common strategy of reaching beneficial arrangements for all parties involved. An example that illustrates this is the alignment of Sino-Russian positions on an international investigation into the alleged chemical incident in Syria in April. Another is the firm opposition to any military attempt to influence events in North Korea.

It is difficult to imagine a bright outcome for Putin and Trump’s meeting, given that Trump has been harassed for more than a year over alleged ties with Moscow by the out-of-control mainstream media. These are of course lies and propaganda created specifically to hobble  the possibility of dialogue of any kind between Moscow and Washington. An important part of the American ‚deep state‘ wishes to sustain a model where unilateral decisions are imposed on the rest of the world. They still live in a world where America is the sole super-power, a world order that existed in the 1990s but which is now almost completely superseded by a multipolar world order. This unipolar vision contrasts openly with a US administration that at least proposes to establish a civil dialogue between superpowers on more delicate international issues.

The best that one can hope for from the G20 in Hamburg and from the meeting between Trump and Putin is either for the arrangement of a visit to Moscow/Washington or for the two parties to deepen mutual understanding. Putin and Xi Jinping are aware that Trump is in a very uncomfortable position, facing daily attacks that leave him with little room for maneuver. At the same time, however, they know that they are faced with a president who has no experience in international relations and who tends to delegate decisions to his generals or those in his intimate circle. The problem with this is that it only fuels competition between deep-state factions. Those who want to bomb Syria sometimes prevail over those who want dialogue and strategic cooperation. Trump’s preference for delegation only exacerbates these rivalries.

The Syrian example is emblematic. Recently, the US Department of State held a press conference where more was revealed than was intended. The spokesperson, in a Freudian slip, admitted that once the offensive in Syria was over and ISIS driven out of the territory, Raqqa would be occupied by its «own» Syrian citizens. What Heather Nauert should have said, or wanted to say, is that the Syrian Democratic Forces (SDF), after conquering the city, would retreat and leave the city in the hands of Syrian citizens (AKA Damascus authority), free to return to the city. Nervousness, or perhaps inexperience, may have affected Nauert, causing her to reveal America’s true intentions in Syria. The relocation of about 150 fighters from al-Tanf to a site under the control of the SDF north of Deir ez-Zor leaves open for Washington and its allies in the region the hope of controlling the borders with Iraq by taking control of Raqqa, Deir ez-Zor and the nearby oilfields. Having known defeat in Aleppo and having areas near Idlib and Homs sealed off, thanks to the agreement in Astana (where Washington was excluded), terrorist allies had only one chance to alter events, which was to balkanize Syria by placing two big cities indirectly under their control and controlling the borders with Iraq. Of course it is a desperate strategy that does not take into account a number of factors, such as the will of the Iraqi, Iranian and Syrian central governments toward re-establishing previous land connections. This is without forgetting Russian influence and support for the Syrian Arab Army that will certainly not be pulled back in the race to Deir ez-Zor and towards Iraq’s borders.

The meeting between Trump and Putin will also serve to emphasize once again the importance of military communications between Washington and Moscow in an environment as fluid as Syria. After the US Air Force downed the Syrian Su-22, communications between the militaries of the two world powers seized completely. In a conflict that sees dozens of opposing factions supported by different nations, it is important that Putin and Trump can at least discuss in person what the red lines are not to be crossed.

The issue of North Korea has been enlivened by Pyongyang’s demonstration of its ability to launch an ICBM (initially pooh-poohed by the West as a medium-range missile before admitting that it was an intercontinental missile) into the Sea of Japan. It is the country’s final demonstration of strength, brought on by decades of military threats from the United States and its allies in the region (South Korea and Japan). With this latest test, North Korea has demonstrated that it has the capacity to hit Washington and its allies in case of the type of aggression Trump has repeatedly threatened. The only alternative to such a war benefitting no one is strong diplomatic negotiations. It seems that Pyongyang, Moscow and Beijing are coordinating a common front following the launch of the ICBM. Putin and Xi Jinping condemned the North Korean launch, but at the same time re-launched Kim Jong-Un’s proposal for a moratorium on nuclear tests in exchange for a renunciation of South Korea’s military exercises with the United States close to the North Korean coast.

Putin and Xi Jinping will have the important task of trying to bring Trump closer to their strategic vision on these delicate issues. The hope is to influence the American decision-making process, while being aware of the strong internal divisions within the United States and Trump’s limited capacity to personally make autonomous decisions in international politics, preferring to delegate those decisions to his subordinates instead.

Divisions, grievances, tensions between the Western bloc and vassal nations in the Middle East seem also to be on the agenda. The United States is divided internally, with an eternal battle between the various souls of the deep state, from the Bush-style intervention faction to the Obama human-rights crowd. Such divisions have reverberated in the Gulf Cooperation Council. Following the visit of the US President to the Middle East, the UAE and Saudi Arabia triggered the most violent internal division within the Council, with Riyadh ready to implement unprecedented measures against Qatar. In Europe, the continued flow of migrants, coupled with the events related to Brexit, and with the attitude of some European leaders towards Trump, has ended up producing a series of frictions between many European countries and the US administration.

It is no surprise that international relations, in such an environment, represented by the smooth and clear relations between Moscow and Beijing, will flourish. An example of how the international environment is changing is represented by Turkey, where, for example, it has common positions with Qatar and Saudi Arabia in Syria, but also openly supports Doha in its recent disputes with Riyadh. While Ankara has bad relations with Berlin, with the personal chemistry between Erdogan and Merkel reflecting this, Turkey’s intention, through the Turkish Stream, is to become an energy hub for Europe. With mixed feelings, London and Washington nevertheless appear to be aligned on future priorities, such as on the need to increase the military spending of NATO member countries (many of whom are facing difficult budget conditions, and are therefore reluctant to pour tens of billions of dollars into armaments), as well as creating strong divisions among European Union countries.

The next G20 will hardly be able to produce sensational or wide-ranging agreements. However, it will be the first open confrontation at the same table, among the many factions that compose the Western consensus and the Sino-Russian alliance. The hope of Russia and China will be to pick up from the Euro-American legacy (often used to advance their interests at the expense of the world community) to guide the world towards goals that avoid conflict, such as in North Korea and Syria. Whether these goals are possible to achieve will depend on Western partners and their willingness to come to compromise.