Putin: Turkey not responsible for drone attack; Russia knows who was by ALEXANDER MERCOURIS 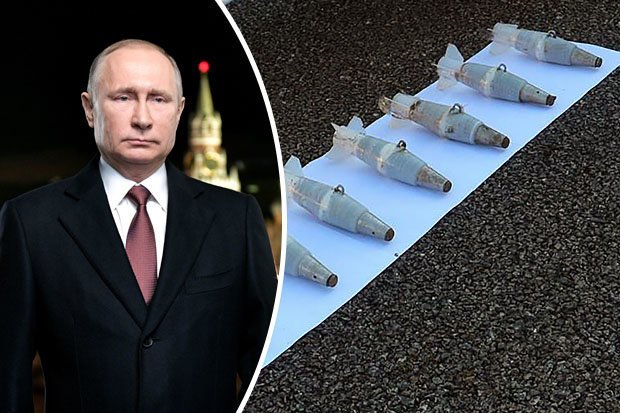 Russian President Putin has now made his first public comments about the drone attack in Syria against Russia’s Khmeimim air base and Tartus naval base, which took place on 6th January 2018.

There were some provocateurs, but they were not Turks. We know who they are, who paid who for this provocation and what the actual sum was.

As for this kind of incidents, there is nothing good about them. These are provocations aimed at destroying previous agreements

[Those actions were also aimed at undermining Russia’s relations with Turkey and Iran].

We understand it perfectly well so we will work together….

As for these attacks, they were undoubtedly prepared well. We know when and where these unmanned vehicles were handed over [to the attackers], and how many of them there were. These aerial vehicles were disguised – I would like to stress that – as homemade. But it is obvious that some high-tech equipment was used

These are exceptionally interesting comments, which closely mirror comments about the drones being made by the Russian military.

Here is what Major General Alexander Novikov, the head of the Russian General Staff’s department for the development of unmanned aerial vehicles, is reported to have said about the drones used in the attack

The creation of drones of this class is impossible in an improvised manner. Their development and usage involved specialists, who had undergone special training in the countries manufacturing and using systems with unmanned aerial vehicles.

[The assembly and usage of unmanned aerial vehicles is a difficult engineering task that demands] special training, know-how in various scientific areas and practical experience in creating these devices.

Special software is also needed to use these drones. For efficient usage of ammunition information on exact target location and such parameters as altitude, flight and wind speed is required. This information cannot be obtained from the Internet.

Moreover, the explosives from the bombs carried by drones that attacked Hmeymim and Tartus bases in Syria cannot be made in makeshift conditions. There are several places where this substance is manufactured and one of them is Ukraine

Preliminary analysis has shown that the main explosive used in the bombs was pentaerythritol tetranitrate (also known as PENT, PENTA or TEN), which has a far higher yield than hexogen. This explosive is manufactured in a number of countries, including Ukraine’s Shostka chemical agents plant. It cannot be made in makeshift conditions or extracted from other ammunition,” he said.

Russia’s military has deciphered route data from the drones that attacked Russian bases in Hmeymim and Tartus in Syria, confirming that they had been launched from one place.

The slide shows deciphered data from the captured drones on their programmed and real flight routes and points of dropping munitions. One drones was equipped with a video camera and designed for controlling and adjusting the strikes if needed.

Up until recently, gunmen used drones mainly for air reconnaissance. Only isolated incidents were fixed when they were used for attacks.

[Those were mainly improvised drones, made of components sold on the open market]

In mid-2016, foreign-made quadcopters were launched to conduct air reconnaissance and carry out strikes. It should be noted here that we registered the appearance of new types and versions of drones operated by militants in Syria a few days after they had gone on free sale in various countries

Taken together Putin’s and Novikov’s comments appear to suggest that the Russians believe that the drone attack was the work of an intelligence agency aiming to make trouble between Turkey and Russia.

President Erdogan is not……a reliable ally of Russia’s or indeed of anyone else, and in Syria he is pursuing a complex strategy based on calculations of his own and Turkey’s self-interest which do not necessarily correspond with Russia’s.  By way of example, President Erdogan continue from time to time to restate his hostility to the Syrian government and to Syrian President Assad personally, both of whom the Russians are at present supporting.

Sometimes President Erdogan’s strategies oblige him to work with Russia, which is what he has been doing for most of 2017, but the Russians cannot by now be under any illusions that if the opportunity arises he will not abruptly reverse course in his own perceived interest and once more become Russia’s enemy in Syria, as he was in the first months of the Russian intervention there.

The Russians are of course fully aware of this and judging from Putin’s comments appear to believe that some foreign intelligence agency hostile to Russia’s Syrian policy has just probed the weak point of Russia’s position in Syria by staging a provocation intended to set Russia and Turkey against each other.

If that is true then it would have to beIt would have to be an intelligence agency with access to Jihadi controlled territory in north west Syria, and able to source advanced explosives which Novikov comes close to say were manufactured in Ukraine.

Putin says that the Russians know which intelligence agency this was, and in truth it is not difficult to join up the dots.

Almost certainly the Russians believe it was the intelligence agencies of either Israel or of the US, and most probably of the US.http://theduran.com/putin-turkey-not-responsible-drone-attack-russia-knows/