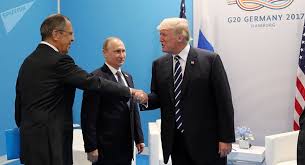 Everything happens for the first time. Never in the 74-year-long history of bilateral meetings have leaders of the two powers made personal acquaintance during a major international event, not a summit or a USSR-Western leading powers top level conference. No Russia-US meeting had been that short and held in such a format.

Despite the fact that the diplomatic relations were established in 1807, the first time a Soviet and US leader met each other was at the 1943 Tehran conference. Back then, Franklin Delano Roosevelt (FDR) and Joseph Stalin established the relationship of trust. If FDR had not died in April, 1945, after meeting Stalin for the second time at the Yalta conference, history could have been different. Perhaps, the war in Korea and many other things could have been averted.

Nikita Khruschev and John F. Kennedy hit it off during the Vienna summit in 1961. The following events – the Berlin Wall and Cuban crises – prevented the ties from becoming a blossoming relationship. There was a chance that personal chemistry between Leonid Brezhnev and Richard Nixon would result in positive changes but the latter had to go. Like Donald Trump, he was known as «an independent president» immune to outside influence.

Personal chemistry was an important factor during the Reagan-Gorbachev meetings which resulted in milestone agreements. In the case of Putin-Trump dialogue, it is one of the most determining factors to promote the bilateral relations and it works.

Now is the time to highlight the major points. The event ran for more than two hours, far longer than the 30 minutes it had been scheduled for, with only translators and the respective chief diplomats – Secretary of State Rex Tillerson and Foreign Minister Sergey Lavrov – joining the heads of state. Much effort had been applied to prepare the talks. It had been not known if the meeting would take place at all till the last moment. Those in Washington, who are ready to go to any length to stymie progress in the relations, did it again. US Senators Jeanne Shaheen (D-NH), Marco Rubio (R-FL), and Johnny Isakson (R-GA), all members of the Senate Foreign Relations Committee, sent a letter to President Donald Trump urging him not to return the Russian diplomatic compounds seized last year by then President Obama following the alleged Russia’s interference in the US presidential election.

They failed to sway President Trump on Russian policy. The meeting went according to quiet a different scenario. No doubt, the fact that it lasted so long will be used against Trump by his opponents. The US president knew it well but stood tall. The compounds issue was discussed in Hamburg despite the senators’ appeal.

Not many details are known about what the presidents talked about but there are deliverables. The parties reached a ceasefire and „de-escalation agreement“ in southwestern Syria which is in effect since July 9. The agreement includes Jordan and Israel. It means the respective governments had been consulted before the event. The reduction in hostilities enables the renewal of political dialogue on Syria.

The parties agreed to establish a special channel of communications to address the problem of Ukraine. On the day of the meeting it was announced that State Secretary Rex Tillerson had appointed Kurt Volker, a former US ambassador to NATO, as special representative to Ukraine to advance the efforts aimed at achieving the objectives set out in the Minsk agreements. So, the United States has become a party to join the peace effort.

Moscow and Washington will hold further discussions on a framework for dealing with a wide array of cyber threats. Cooperation on cybersecurity is a relatively new issue, and probably has never been among the most prioritized. The parties have rather different approaches to the problem: Russia gives priority to «international information security», whereas the US prefers the term «cybersecurity» with a focus on the protection of computer networks and resources. It’s very important that dialogue on the burning issue will be launched.

There was a host of other issues on the agenda. The details will become known as time goes by. The issue of embassy compounds is likely to become a kind of relationship matrix.

Definitely, the meeting is a success, especially in view of unprecedented attacks against President Trump at home. The leaders did not limit to a simple exchange of pleasantries and cordial handshakes, they talked shop. It’s not known how much attention was given to arms control, non-proliferation and military activities. The growing possibility of incidents in the Baltic Sea, especially during military exercises, is a very worrisome development but it’s not the only one. The list of hot issues to be addressed is too long.

But against all the odds, it was a robust and lengthy exchange of opinions on the most acute problems – a very good start on the way out of the impasse. The Hamburg event can jumpstart the general normalization of the bilateral relations. Evidently, the Putin-Trump meeting in Hamburg is a success and a significant step forward. The two leaders did it to pave the way to further progress.