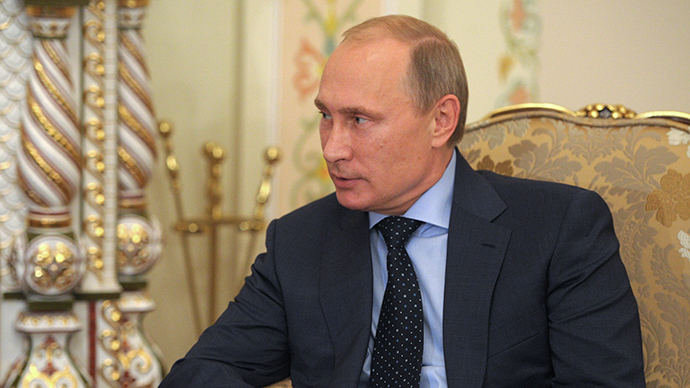 In an interview today with Politika, a Serbian newspaper, Russia’s president, Vladimir Putin, said that it is futile and dangerous for the US and its European puppets to blackmail Russia and that the Exceptional Nation and its vassals should consider the risks that are inherent in aggressive disputes between countries heavily armed with nuclear weapons. Putin noted that Obama took a hostile attitude toward Russia in Obama’s UN speech to the General Assembly on September 24 when Obama declared Russia to be one of the three threats to the world along with the Islamic State and ebola. President Putin said that unilateral and punitive actions taken against Russia can provoke a crisis, and that if Washington’s purpose is to”isolate our country, it is an absurd and illusory goal.”
Here are some of President Putin’s direct quotes:

“How can we talk about de-escalation in Ukraine while the decisions on new sanctions are introduced almost simultaneously with the agreements on the peace process?”

“Together with the sanctions against entire sectors of our economy, this approach can be called nothing but hostile.”

“We hope that our partners will realize the futility of attempts to blackmail Russia and remember what consequences discord between major nuclear powers could bring for strategic stability.”

If we don’t all die from nuclear blasts, radiation, and nuclear winter, it will be because of the humanity and common sense–both of which are missing in Washington–of the President of Russia.

Look around you. The economies and stock markets of Western civilization are in retreat. Stupid and incompetent public authorities have brought ebola into America. And what is Washington doing? The energies of the Exceptional Government are focused on combating the Islamic State, a creature created by Washington itself, and on demonizing Russia.

Has any country, anywhere on the fact of the earth, at any period of history been so totally misruled as the United States?

Americans need to understand that their government is not merely incompetent and immoral, but that it is evil. Washington hides behind moral language but is itself devoid of moral conscience. There is no evil of which Washington is incapable. Those who support Washington support evil.