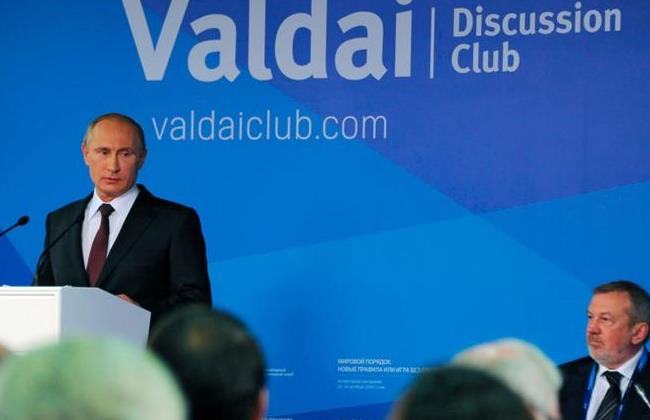 The System of global security is seriously enfeebled and there are no guarantees that it will be capable of safeguarding the world from upheavals, Russian President Vladimir Putin said on Friday at a session of the Valdai international discussions club.

“Controversies are stockpiling in the world and let’s ask one another frankly whether or not we have a reliable safety net,”

Putin offered his own answer to the question, saying:

“Unfortunately, there are neither guarantees nor assuredness that the existing system of global and regional security will be capable of safeguarding us from upheavals.”

“The system is enfeebled, fragmented and deformed”

Putin said he is confident that the world order should have been reconstructed in a sensible way and the check-and-balance system should not have been destroyed with nothing built instead of it.

He said that “otherwise no other instruments except brutal force remain.”

The president warned of growing manifestations of world anarchy, due to follow unless a comprehensible system of mutual liabilities is created among the world community’s members.

“If we fail to create a comprehensible system of mutual liabilities and agreements and establish mechanisms of handling crises, the signs of world anarchy will be inevitably growing,” Putin warned.

He said that “already now there has soared the risk of a string of acute conflicts with the direct or indirect involvement of major powers.”

“The risk factors are found not just in traditional interstate contradictions, but the internal instability of certain states, especially when the countries in focus are located at the junction of geo-political interests of major states or on the border of cultural, historic, economic and civilizational continents,” he explained. “Ukraine is one of the examples of such conflicts having adverse effects on the world line-up of forces. And I believe it is far from being the last one.2

On interference in the internal affairs of sovereign states

Russian President Vladimir Putin has called for drawing a clear line between international security and interference in the internal affairs of sovereign states. “It is necessary to set the limits of unilateral actions and the need to use multilateral mechanisms. In a bid to improve international law, it is necessary to solve the dilemma and draw a line between the actions of the world community designed to safeguard security and human rights and the principles of national sovereignty and non-interference in the internal affairs of states,”

Putin criticizes US attempts to revive cold war schemes
Vladimir Putin said the United States is trying to revive the control scheme on the international arena it had got used to during the cold war, but these attempts will cause a response reaction and will bring reverse effect.

“The United States that declared itself the winner of the cold war considered self-confidently that there is no need in this [reconstruction of international relations],” Putin said.

“Instead of establishing a new balance of forces that is the required condition for order and stability – on the contrary, steps were taken that led to a sharp deterioration of misbalance,” he said.

„Unipolar world order is ineffective in the fight against real threaths,“ Putin added.

Russian president said the US is trying to recreate some sort of quasi-bipolar system to use propaganda to form a ‚center of evil‘ the way it was done during Cold War.

According to Putin, a unipolar world set-up has clearly demonstrated that the emergence of one dominating power center has not made global processes more manageable.

“Moreover, such an unstable set-up has proven to be ineffective in dealing with real threats such as regional conflicts, terrorism, drug trafficking, religious fanaticism, chauvinism and neo-Nazism,” Putin told a meeting of the Valdai international discussion club.

On the contrary, a unipolar set-up, Putin went on to say, opened a broad way to manifestations of national ambitions, manipulation of public opinion and rude suppression of the will of the weak by the will of the strong.

According to Russian president, the United States actions in the area of missile defence have opened the way for a pernicious process of demolishing the existing system of arms control treaties.

Putin said that there was a real threat that the existing system of arms control treaties could be wrecked. “And it was the United States that kicked off this pernicious process when in 2002 it unilaterally withdrew from the Anti-Ballistic Missile /ABM/ Treaty. And then they launched and now are taking active steps to create their own global system of missile defence,” he said. “We never started it,” he stressed.

As a result, according to the head of state, the world is slipping back to the time “when countries were kept from direct confrontation not by the balance of interests and mutual guarantees but by fear and the balance of mutual destruction.”

“In the absence of legal and political instruments, weapons are coming back to the centre of the global agenda,” Putin said. “It is being used anywhere and any way, without any sanctions from the United Nations Security Council. And if the Security Council refuses to rubber-stamp such resolutions it is immediately declared an obsolete and inefficient instrument.”

That is why, in his words, many states see no other guarantees to ensure their sovereignty that to have “their own bomb.” “It is extremely dangerous,” Putin warned.