Pro Peace Candidate Tulsi Gabbard Ready for America. Is America Ready For Her? 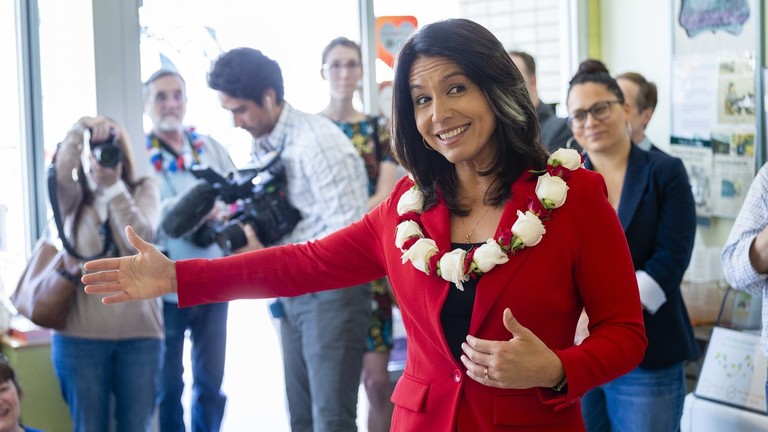 Get short URL
Rep. Tulsi Gabbard (D-HI), Iowa City, April 16, 2019 © Global Look Press / KC McGinnis
Since announcing her bid for the Democratic Party nomination in 2020, Tulsi Gabbard has been on a one-woman quest to confront America with reality.

In speech after speech, interview after interview, and in social media post after social media post, the Democratic Party congresswoman from Hawaii has served up a merciless indictment of US militarism, making the elementary point that Washington’s obscenely inflated defense budget and its addiction to regime change wars, military interventions and the subversion of sovereign governments in pursuit of the full spectrum dominance that lies at the heart of the malignant creeds of neoconservatism and liberal interventionism, is harming rather than protecting the interests of the American people.

The harm is measured in an ‘official’ poverty rate of 12.3 percent, in other words 39.7 million people. It is measured in a homelessness crisis of indictable proportion, affecting over 500,000 people. And it is measured in the fact that as one of the richest countries in the world, tens of millions of its citizens are without healthcare.

The money and resources that could be used to alleviate the aforementioned and other crises engulfing America is instead being thrown into the black hole of a military-industrial complex that sustains over 800 officially recognized US military bases in over 70 countries around the world with the objective of making the world safe not for democracy but for US and Western corporations to exploit the world’s natural and human resources in the interests of the country’s economic elite.

ALSO ON RT.COMGrope & change: Would America become one nation under Joe Biden?In his classic work, ‘A People’s History of the United States’, Howard Zinn quotes US historian Marilyn Young, who after the First Gulf War in 1991 pointed out that “The US can destroy Iraq’s highways, but not build its own; create the conditions for epidemic in Iraq, but not offer healthcare to millions of Americans. It can excoriate Iraqi treatment of its Kurdish minority, but not deal with domestic race relations; create homelessness abroad but not solve it here.”

In a field of candidates for the nomination that includes former vice president Joe Biden, veteran congresswoman Elizabeth Warren, and democratic socialist Bernie Sanders, Tulsi Gabbard stands out as the only one who’s been willing to subject the sacred cow of US hegemony to close scrutiny and even harsher criticism, earning in consequence the mounting opprobrium of a Washington political and media class that is hard wired to the myth of US hard power and force as the last best hope for mankind.

Even prior to announcing her bid for the White House, Tulsi Gabbard had stood as a lone voice of reason when it came to the conflict in Syria. Unlike her detractors, she actually took the trouble and time to visit the country and meet its leader, President Assad. She said of the Syrian president: „Assad is not the enemy of the United States because Syria does not pose a direct threat to the United States.“

ALSO ON RT.COMDon’t ‘feel the Bern’ if you don’t want to get burnt Bringing things up to date on the attempted coup in Venezuela, inspired by Washington’s unhinged neocon-in-chief John Bolton, Gabbard tweeted in January: “The United States needs to stay out of Venezuela. Let the Venezuelan people determine their future. We don’t want other countries to choose our leaders–so we have to stop trying to choose theirs.”

On relations with Russia, she is a strong advocate of replacing the current policy of sanctions and confrontation with serious diplomacy and normalization, and is committed to ending what she describes as the “New Cold War”.

Tulsi Gabbard, in sum, has been inspirationally fearless in her willingness to confront the neocon and liberal interventionist establishment in the US with a political vision that is rooted in anti-hegemony, anti-war and pro-peace, a vision she articulates with great passion and eloquence. Oh, and by the way, she’s also served in the military, ticking thereby an increasingly necessary box for putative leaders in a country in which the cult of the armed forces is the most pervasive cult of all.

Though very much in the minority in opposing US hegemony as being coterminous with human progress and civilization, Tulsi Gabbard’s emergence fills a glaring lacuna in a political culture in Washington chronically afflicted with the moral and rabid sickness of an empire that has entered its mad dog days.

In this quest, she calls to mind another great American champion of peace rather than war, of the substitution of human connectedness for American exceptionalism, and of the principles set out in the UN Charter of respect for international law, national sovereignty, and self-determination.

His name was Henry Wallace, a true progressive who had served as Roosevelt’s vice president between 1940 and 1944, before being replaced by Harry Truman. Wallace campaigned for a vision of the rest of the 20th century at the end of the war as the ‘Century of the Common Man’. It set him miles apart not from the mass of the American people who’d seen loved ones perish and permanently maimed, physically and psychologically, in the war, but from the arms dealers and war hawks in Washington for whom permanent war was the only road to the Roman peace they believed in.

ALSO ON RT.COMStraight-talking Tulsi’s rising star means setting sun for Dem Party establishmentHow different history could have been if Henry Wallace rather than Harry S. Truman had been vice president upon the death of Roosevelt at the close of the war in 1945.

Writing of Henry Wallace in their ‘Untold History of the United States’, co-authors Oliver Stone and Peter Kuznick included a speech he gave in New York in 1946 on the first anniversary of FDR’s death. During the speech, Wallace responded to the sentiments of confrontation with the Soviet Union advocated by Winston Churchill in his infamous ‘Iron Curtain speech’, delivered in Fulton, Missouri the previous month.

Tulsi Gabbard is our Henry Wallace, a person whose vision of a world shorn of cold and hot wars in the cause not of democracy or freedom but hegemony, empire and domination places her on a higher moral and ethical plane than her counterparts. Her fidelity to spreading the truth and excoriating the war mongers and hawks is testament to a woman inspired by Wallace’s example.

As in his time, the crucial question in ours revolves around whether America is ready to hear this particular truth – the truth about the real motives and vested interests that are driving US foreign policy and Washington’s engagement with the world – and act upon it.

The statements, views and opinions expressed in this column are solely those of the author and do not necessarily represent those of RT. https://www.rt.com/op-ed/458503-tulsi-gabbard-henry-wallace/