Pepe Escobar: Why NATO is terrified of Russia 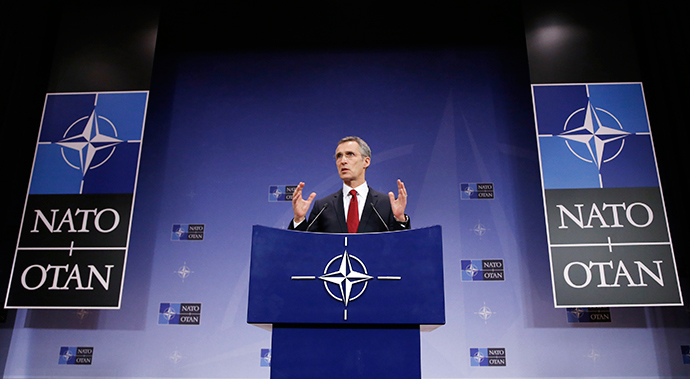 The twin-pronged attack – oil price war/raid on the ruble – aimed at destroying the Russian economy and place it into a form of Western natural resource vassalage has failed.

Natural resources were also essentially the reason for reducing Iran to a Western vassalage. That never had anything to do with Tehran developing a nuclear weapon, which was banned by both the leader of the Islamic revolution, Ayatollah Khomeini, and Supreme Leader Ayatollah Khamenei.

The ‘New Great Game’ in Eurasia was always about control of the Eurasian land mass. Minor setbacks to the American elite project do not mean the game will be restricted to a mere “war of attrition”. Rather the contrary.

In Ukraine, the Kremlin has been more than explicit there are two definitive red lines. Ukraine won’t join NATO. And Moscow won’t allow the popular republics of Donetsk and Lugansk to be crushed.

We are coming closer to a potentially explosive deadline – when EU sanctions expire in July. An EU in turmoil but still enslaved to NATO – see the pathetic “Dragoon Ride” convoy from the Baltics to Poland or the “Atlantic Resolve” NATO show-off exercise – may decide to expand them, and even try to exclude Russia from SWIFT.

Only fools believe Washington is going to risk American lives over Ukraine or even Poland. Yet let’s plan a few steps ahead. If it ever comes to the unthinkable – a war between NATO and Russia in Ukraine – Russian defense circles are sure of conventional and nuclear superiority on sea and land. And the Pentagon knows it. Russia would reduce NATO forces to smithereens in a matter of hours. And then would come Washington’s stark choice: accept ignominious defeat or escalate to tactical nuclear weapons.

The Pentagon knows that Russia has the air and missile defense capabilities to counter anything embedded in the US Prompt Global Strike (PGS). Simultaneously though, Moscow is saying it would rather not use these capabilities.

Unlike non-stop Pentagon/NATO bragging/demonizing, what Russian defense circles don’t need to advertise is how they are now a couple of generations ahead of the US in their advanced weaponry.

The bottom line is that while the Pentagon was mired in the Afghanistan and Iraq quagmires, they completely missed Russia’s technological jump ahead. The same applies to China’s ability to hit US satellites and thus pulverize American ICBM satellite guidance systems.

The current privileged scenario is Russia playing for time until it has totally sealed Russia’s air space to American ICBMs, stealth aircraft and cruise missiles – via the S-500 system.

This has not escaped the attention of the British Joint Intelligence Committee (JIC) – as it gamed sometime ago whether Washington might launch a first strike against Russia.

According to the JIC, Washington might go rogue if „a) an extreme government were to take over in the United States, b) and there was increased lack of confidence by the United States in some if not all of her Western allies owing to political developments in their countries, c) and there was some sudden advance in the USA in the sphere of weapons, etc. that the counsels of impatience may get the upper hand.“

US ‘Think Tankland’ spinning that Russian military planners should take advantage of their superiority to launch a first strike nuclear attack against the US is bogus; the Russian doctrine is eminently defensive.

Yet that does not exclude Washington doing the unthinkable the next time the Pentagon thinks of itself to be in the position Russia is now in.

The whole game used to be about who ruled the waves – the geopolitical gift the US inherited from Great Britain. Control of the seas meant the US inheriting five empires; Japan, Germany, Great Britain, France, the Netherlands. All those massive US carrier task forces patrolling the oceans to guarantee “free trade” – as the hegemonic propaganda machine goes – could be turned against China in a flash. It’s a mechanism similar to the carefully choreographed “leading from behind” financial op to simultaneously crash the ruble/launch an oil war and thus smash Russia into submission.

Washington’s master plan remains deceptively simple; to “neutralize” China by Japan, and Russia by Germany, with the US backing its two anchors, Germany and Japan. Russia is the de facto only BRICS nation blocking the master plan.

This was the case until Beijing launched the New Silk Road(s), which essentially mean the linking of all Eurasia into a “win-win” trade/commerce bonanza on high-speed rail, and in the process diverting freight tonnage overland and away from the seas.

So NATO’s non-stop Russia demonizing is in fact quaint. Think about NATO picking a fight against the constantly evolving, complex Russia-China strategic partnership. And in a not so remote future, as I indicated here, Germany, Russia and China have what it takes to be the essential pillars of a fully integrated Eurasia.

As it stands, the key shadow play is Moscow and Beijing silently preparing their own SWIFT system while Russia prepares to seal its air space with S-500s. Western Ukraine is doomed; leave it to the austerity-ravaged EU – which, by the way, doesn’t want it. And all this while the same EU tries to handicap the US commercially with a rigged euro that still doesn’t allow it to penetrate more US markets.

As for an irrelevant NATO, all it can do is cry, cry, cry.

Pepe Escobar is the roving correspondent for Asia Times/Hong Kong, an analyst for RT and TomDispatch, and a frequent contributor to websites and radio shows ranging from the US to East Asia.