Pepe Escobar „What Did U.S. Intel Really Know About the ‘Chinese’ Virus? 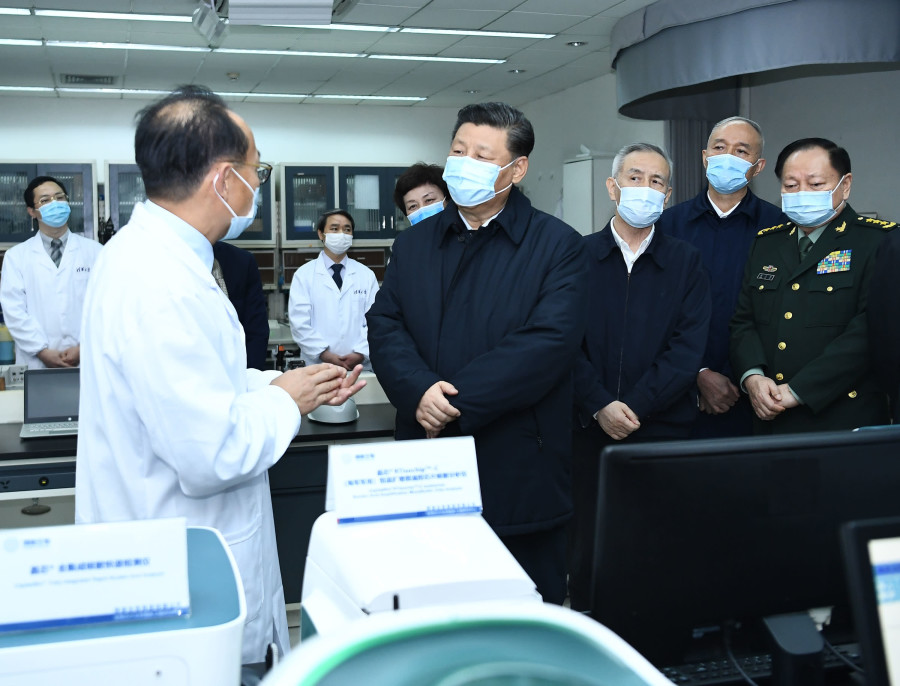 Hybrid War 2.0 on China, a bipartisan U.S. operation, is already reaching fever pitch. Its 24/7 full spectrum infowar arm blames China for everything coronavirus-related – doubling as a diversionist tactic against any informed criticism of woeful American unpreparedness.

Hysteria predictably reigns. And this is just the beginning.

A deluge of lawsuits is imminent – such as the one in the Southern District of Florida entered by Berman Law Group (linked to the Democrats) and Lucas-Compton (linked to the Republicans). In a nutshell: China has to shell out tons of cash. To the tune of at least $1.2 trillion, which happens to be – by surrealist irony – the amount of U.S. Treasury bills held by Beijing, all the way to $20 trillion, claimed by a lawsuit in Texas.

The prosecution’s case, as Scott Ritter memorably reminded us, is straight out of Monty Python. It works exactly like this:

“If she weighs the same as a duck…

In Hybrid War 2.0 terms, the current CIA-style narrative translates as evil China never telling us, the civilized West, there was a terrible new virus around. If they did, we would have had time to prepare.

And yet they lied and cheated – by the way, trademark CIA traits, according to Mike “We Lie, We Cheat, We Steal” Pompeo himself. And they hid everything. And they censored the truth. So they wanted to infect us all. Now they have to pay for all the economic and financial damage we are suffering, and for all our dead people. It’s China’s fault.

All this sound and fury forces us to refocus back to late 2019 to check out what U.S. intel really knew then about what would later be identified as Sars-Cov-2.

“No such product exists”

The gold standard remains the ABC News report according to which intel collected in November 2019 by the National Center for Medical Intelligence (NCMI), a subsidiary of the Pentagon’s Defense Intelligence Agency (DIA), was already warning about a new virulent contagion getting out of hand in Wuhan, based on “detailed analysis of intercepted communications and satellite imagery”.

An unnamed source told ABC, “analysts concluded it could be a cataclysmic event”, adding the intel was “briefed multiple times” to the DIA, the Pentagon’s Joint Chiefs of Staff, and even the White House.

No wonder the Pentagon was forced to issue the proverbial denial – in Pentagonese, via one Col. R. Shane Day, the director of the DIA’s NCMI: “In the interest of transparency during this current public health crisis, we can confirm that media reporting about the existence/release of a National Center for Medical Intelligence Coronavirus-related product/assessment in November of 2019 is not correct. No such NCMI product exists.”

Well, if such “product” existed, Pentagon head and former Raytheon lobbyist Mark Esper would be very much in the loop. He was duly questioned about it by ABC’s George Stephanopoulos.

Question: “Did the Pentagon receive an intelligence assessment on COVID in China last November from the National Center for Medical Intelligence of DIA?”

Question: “This assessment was done in November, and it was briefed to the NSC in early December to assess the impact on military readiness, which, of course, would make it important to you, and the possible spread in the United States. So, you would have known if there was a brief to the National Security Council in December, wouldn’t you?”

So “no such product exists” then? Is it a fake? Is it a Deep State/CIA concoction to trap Trump? Or are the usual suspects lying, trademark CIA style?

Let’s review some essential background. On November 12, a married couple from Inner Mongolia was admitted to a Beijing hospital, seeking treatment for pneumonic plague.

The Chinese CDC, on Weibo – the Chinese Twitter – told public opinion that the chances of this being a new plague were “extremely low.” The couple was quarantined.

Four days later, a third case of pneumonic plague was identified: a man also from Inner Mongolia, not related to the couple. Twenty-eight people who were in close contact with the man were quarantined. None had plague symptoms. Pneumonic plague has symptoms of respiratory failure similar to pneumonia.

Even though the CDC repeated, “there is no need to worry about the risk of infection”, of course there was plenty of skepticism. The CDC may have publicly confirmed on November 12 these cases of pneumonic plague. But then Li Jifeng, a doctor at Chaoyang Hospital where the trio from Inner Mongolia was receiving treatment, published, privately, on WeChat, that they were first transported to Beijing actually on November 3.

The key point of Li Jinfeng’s post – later removed by censors – was when she wrote, “I am very familiar with diagnosing and treating the majority of respiratory diseases (…) But this time, I kept on looking but could not figure out what pathogen caused the pneumonia. I only thought it was a rare condition and did not get much information other than the patients’ history.”

Even if that was the case, the key point is that the three Inner Mongolian cases seem to have been caused by a detectable bacteria. Covid-19 is caused by the Sars-Cov-2 virus, not a bacteria. The first Sars-Covid-2 case was only detected in Wuhan in mid to late December. And it was only last month that Chinese scientists were able to positively trace back the first real case of Sars-Cov-2 to November 17 – a few days after the Inner Mongolian trio.

Knowing exactly where to look

It’s out of the question that U.S. intel, in this case the NCMI, was unaware of these developments in China, considering CIA spying and the fact these discussions were in the open on Weibo and WeChat. So if the NCMI “product” is not a fake and really exists, it only found evidence, still in November, of some vague instances of pneumonic plague.

Thus the warning – to the DIA, the Pentagon, the National Security Council, and even the White House – was about that. It could not possibly have been about coronavirus.

The burning question is inevitable: how could the NCMI possibly know all about a viral pandemic, still in November, when Chinese doctors positively identified the first cases of a new type of pneumonia only on December 26?

Add to it the intriguing question of why the NCMI was so interested in this particular flu season in China in the first place – from plague cases treated in Beijing to the first signs of a “mysterious pneumonia outbreak” in Wuhan.

There may have been subtle hints of slightly increased activity at clinics in Wuhan in late November and early December. But at the time nobody – Chinese doctors, the government, not to mention U.S. intel – could have possibly known what was really happening.

China could not be “covering up” what was only identified as a new disease on December 30, duly communicated to the WHO. Then, on January 3, the head of the American CDC, Robert Redfield, called the top Chinese CDC official. Chinese doctors sequenced the virus. And only on January 8 it was determined this was Sars-Cov-2 – which provokes Covid-19.

This chain of events reopens, once again, a mighty Pandora’s box. We have the quite timely Event 201; the cozy relationship between the Bill and Melinda Gates Foundation and the WHO, as well as the Word Economic Forum and the Johns Hopkins galaxy in Baltimore, including the Bloomberg School of Public Health; the ID2020 digital ID/vaccine combo; Dark Winter – which simulated a smallpox bio-attack on the U.S., before the 2001 anthrax attack being blamed on Iraq; U.S. Senators dumping stocks after a CDC briefing; more than 1,300 CEOs abandoning their cushy perches in 2019, “forecasting” total market collapse; the Fed pouring helicopter money already in September 2019 – as part of QE4.

And then, validating the ABC News report, Israel steps in. Israeli intel confirms U.S. intel did in fact warn them in November about a potentially catastrophic pandemic in Wuhan (once again: how could they possibly know that on the second week of November, so early in the game?) And NATO allies were warned – in November – as well.

The bottom line is explosive: the Trump administration as well as the CDC had an advance warning of no less than four months – from November to March – to be properly prepared for Covid-19 hitting the U.S. And they did nothing. The whole “China is a witch!” case is debunked.

Moreover, the Israeli disclosure supports what’s nothing less than extraordinary: U.S. intel already knew about Sars-Cov-2 roughly one month before the first confirmed cases detected by doctors in a Wuhan hospital. Talk about divine intervention.

That could only have happened if U.S. intel knew, for sure, about a previous chain of events that would necessarily lead to the “mysterious outbreak” in Wuhan. And not only that: they knew exactly where to look. Not in Inner Mongolia, not in Beijing, not in Guangdong province.

It’s never enough to repeat the question in full: how could U.S. intel have known about a contagion one month before Chinese doctors detected an unknown virus?

Mike “We Lie, We Cheat, We Steal” Pompeo may have given away the game when he said, on the record, that Covid-19 was a “live exercise”. Adding to the ABC News and Israeli reports, the only possible, logical conclusion is that the Pentagon – and the CIA – knew ahead of time a pandemic would be inevitable.

That’s the smokin’ gun. And now the full weight of the United States government is covering all bases by proactively, and retroactively, blaming China.