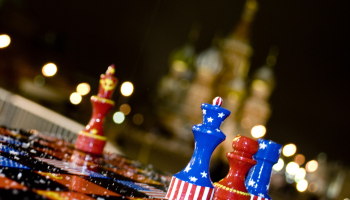 A high-level European diplomatic source has confirmed to Asia Times that German chancellor Angela Merkel’s government has vigorously approached Beijing in an effort to disrupt its multi-front strategic partnership with Russia.

Beijing won’t necessarily listen to this political gesture from Berlin, as China is tuning the strings on its pan-Eurasian New Silk Road project, which implies close trade/commerce/business ties with both Germany and Russia.

The German gambit reveals yet more pressure by hawkish sectors of the U.S. government who are intent on targeting and encircling Russia. For all the talk about Merkel’s outrage over the U.S. National Security Agency’s tapping shenanigans, the chancellor walks Washington’s walk. Real “outrage” means nothing unless she unilaterally ends sanctions on Russia. In the absence of such a response by Merkel, we’re in the realm of good guy-bad guy negotiating tactics.

The bottom line is that Washington cannot possibly tolerate a close Germany-Russia trade/political relationship, as it directly threatens its hegemony in the Empire of Chaos.

Thus, the whole Ukraine tragedy has absolutely nothing to do with human rights or the sanctity of borders. NATO ripped Kosovo away from Yugoslavia-Serbia without even bothering to hold a vote, such as the one that took place in Crimea.

In parallel, another fascinating gambit is developing. Some sectors of U.S. Think Tankland – with their cozy CIA ties – are now hedging their bets about Cold War 2.0, out of fear that they have misjudged what really happens on the geopolitical chessboard.

I’ve just returned from Moscow, and there’s a feeling the Federal Security Bureau and Russian military intelligence are increasingly fed up with the endless stream of Washington/NATO provocations – from the Baltics to Central Asia, from Poland to Romania, from Azerbaijan to Turkey.

This is an extensive but still only partial summary of what’s seen all across Russia as an existential threat: Washington/NATO’s intent to block Russia’s Eurasian trade and development; destroy its defense perimeter; and entice it into a shooting war.

A shooting war is not exactly a brilliant idea. Russia’s S-500 anti-missile missiles and anti-aircraft missiles can intercept any existing ICBM, cruise missile or aircraft. S-500s travel at 15,480 miles an hour; reach an altitude of 115 miles; travel horizontally 2,174 miles; and can intercept up to ten incoming missiles. They simply cannot be stopped by any American anti-missile system.

Some on the U.S. side say the S-500 system is being rolled out in a crash program, as an American intel source told Asia Times. There’s been no Russian confirmation. Officially, Moscow says the system is slated to be rolled out in 2017. End result, now or later: it will seal Russian airspace. It’s easy to draw the necessary conclusions.

That makes the Obama administration’s “policy” of promoting war hysteria, coupled with unleashing a sanction, ruble and oil war against Russia, the work of a bunch of sub-zoology specimens.

Some adults in the EU have already seen the writing on the (nuclear) wall. NATO’s conventional defenses are a joke. Any military buildup – as it’s happening now – is also a joke, as it could be demolished by the 5,000 tactical nuclear weapons Moscow would be able to use.

When in doubt, bully

Of course it takes time to turn the current Cold War 2.0 mindset around, but there are indications the Masters of the Universe are listening – as this essay shows. Call it the first (public) break in the ice.

Let’s assume Russia decided to mobilize five million troops, and switch to military production. The “West” would back down to an entente cordiale in a flash. And let’s assume Moscow decided to confiscate what remains of dodgy oligarch wealth. Vladimir Putin’s approval rate – which is not exactly shabby as it stands – would soar to at least 98%. Putin has been quite restrained so far. And still his childishly hysterical demonization persists.

It’s a non-stop escalation scenario. Color revolutions. The Maidan coup. Sanctions; “evil” Hitler/Putin; Ukraine to enter NATO; NATO bases all over. And yet reality – as in the Crimean counter coup, and the battlefield victories by the armies of the People’s Republics of Donetsk and Lugansk – has derailed the most elaborate U.S. State Department/NATO plans. On top of it Merkel and France’s Francois Hollande were forced into an entente cordiale with Russia – on Minsk 2 – because they knew that would be the only way to stop Washington from further weaponizing Kiev.

Putin is essentially committed to a very complex preservation/flowering process of Russia’s history and culture, with overtones of pan-Slavism and Eurasianism. Comparing him to Hitler does not even qualify as a kindergarten prank.

Yet don’t expect Washington neo-cons to understand Russian history or culture. Most of them would not even survive a Q&A on their beloved heroes Leo Strauss and Carl Schmitt. Moreover, their anti-intellectualism and exceptionalist arrogance creates only a privileged space for undiluted bullying.

A U.S. academic, one of my sources, sent a letter to Nancy Pelosi copied to a notorious neo-con, the husband of Victoria, the Queen of Nulandistan. Here’s the neo-con’s response, via his Brookings Institution email: “Why don’t you go (expletive deleted) yourself?” Yet another graphic case of husband and wife deserving each other.

At least there seem to be sound IQs in the Beltway driven to combat the neo-con cell inside the State Department, the neo-con infested editorial pages of the Wall Street Journal and the Washington Post, an array of think tanks, and of course NATO, whose current military leader, Gen. Breedlove/Breedhate, is working hard on his post-mod impersonation of Dr. Strangelove.

Russian “aggression” is a myth. Moscow’s strategy, so far, has been pure self-defense. Moscow in a flash will strongly advance a strategic cooperation with the West if the West understands Russia’s security interests. If those are violated – as in provoking the bear – the bear will respond. A minimum understanding of history reveals that the bear knows one or two things about enduring suffering. It simply won’t collapse – or melt away.

Meanwhile, another myth has also been debunked: That sanctions would badly hurt Russia’s exports and trade surpluses. Of course there was hurt, but bearable. Russia enjoys a wealth of raw materials and massive internal production capability – enough to meet the bulk of internal demand.

So we’re back to the EU, Russia and China, and everyone in between, all joining the greatest trade emporium in history across the whole of Eurasia. That’s what Putin proposed in Germany a few years ago, and that’s what the Chinese are already doing. And what do the neo-cons propose? A nuclear war on European soil.