Partition of Germany and Devastation of Ukraine: Can Parallels be Drawn? 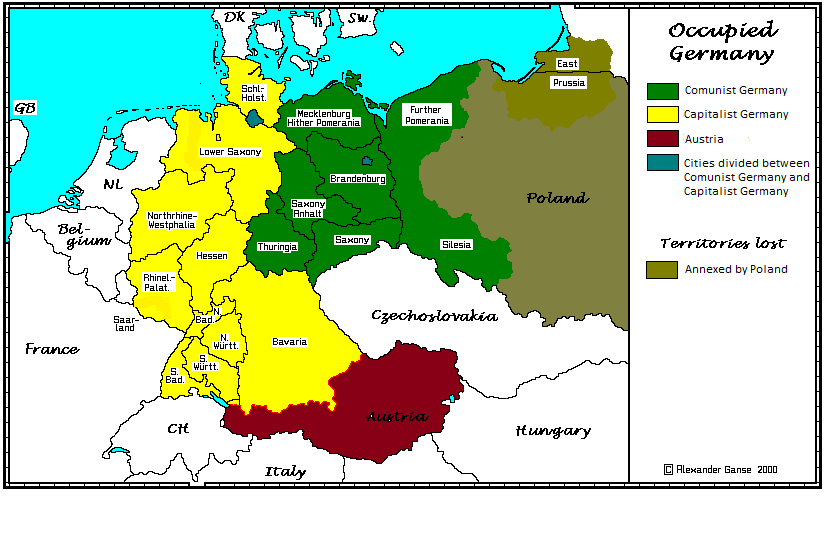 The 70th anniversary of victory over fascist Germany is drawing near while the humanity is facing an ongoing experiment aimed at the change of established world order, tearing up the existing system of international relations and undermining international law. On October 24, Russian President Putin took part in the final plenary meeting of the Valdai International Discussion Club’s XI session. The meeting’s theme was The World Order: New Rules or a Game without Rules. In his address he emphasized that, «The world is full of contradictions today. We need to be frank in asking each other if we have a reliable safety net in place. Sadly, there is no guarantee and no certainty that the current system of global and regional security is able to protect us from upheavals. This system has become seriously weakened, fragmented and deformed. The international and regional political, economic, and cultural cooperation organizations are also going through difficult times». The West inspired the Ukrainian crisis and continues to support the Kiev-based regime giving an impulse to the process of devastation.

The mechanisms of maintaining the post-war world order were defined by the members of anti-Hitler coalition during the conferences in Tehran, Yalta and Potsdam. Today the Western states – parties to «the Big Three» – are destroying this order. They are not the only ones. Germany has also joined the efforts. And this country is a special case. The only thing it signed in 1945 was the act of unconditional capitulation.

Only very naïve people may believe that Germany is deeply involved in Ukraine because it is trying to defend the right of Ukrainians to make a European choice. It’s only a specious pretext to ultimately do away with the existing world order that put a leash on German militarism and guaranteed that the Hitler’s juggernaut of war will never resurrect.

All the post-war years Germany has been trying to free itself from the restrictions imposed by the Yalta and Potsdam agreements with the help of Washington, London, Paris and Brussels. Now Berlin along with former enemies is taking advantage of the Ukrainian crisis to show Moscow its place as Russia is the last remaining guarantor of the Yalta-Potsdam world order. Those who try to take revenge should be remembered how the Germany’s post-war status was defined and who among the winners really stood for guarantees that peace and harmony would reign on German soil and Nazism would never be revived there.

The post-war settlement and the future of Germany first hit the «Big Three» agenda at the Tehran conference (November 28 – December 1, 1943). President Roosevelt submitted a plan for the division of Germany into five autonomous states and two other areas to be under United Nations control. Winston Churchill also supported the idea of Germany’s partition. He said he wanted the division of Prussia to become part of the agenda. The British Prime Minister said it would be right to separate Bavaria and some other provinces from Germany. According to him, the southern parts of the country (Bavaria, Baden, Württemberg, and Palatinate from Saar to Saxony) were to be united with Austria and Hungary into the so called «Danube Confederation».

The Soviet delegation did not support the plans. Stalin said if Germany were divided there would be nothing to stop its unification. The negative scenario for Germany was avoided and the issue was referred to the European Consultative Commission set up in November 1943 to work on proposals for the post-war settlement.

The Soviet leader did not go the Tehran empty handed to make off the cuff proposals.

The commission led by Voroshilov played the key role in the top leadership decision making process and political planning. Its head was also a member of the State Defense Committee and General Headquarters. He enjoyed a direct access to the country’s leader and in comparison with other heads of commissions had more political and administrative influence.

The commission was directly linked to the European Consultative Commission activities as it was responsible for preparing directives for the Soviet representative. The most important documents were personally approved by Stalin.

According to the stance taken by Stalin, the commission pursued two main objectives: to preserve Germany as one state and keep up the cooperation between the members of anti-Hitler’s coalition. With these goals in mind the commission worked out rather restrained and cautious recommendations on prisoners’ labor, the reform of economic structure and anti-Nazi correctional education of Germans.

The commissions led by Litvinov and Maisky took a tougher stand. For instance, Litvinov wanted Germany to be divided into a few separate states. He came under harsh criticism from leadership of the People’s Commissariat for Foreign Affairs which abided by the Stalin’s stance on Germany.

At the Yalta (Crimea) conference (February 4-11, 1945) the allies worked out plans on the final phase of the war, the post-war status of Germany, «including the complete disarmament, demilitarization and dismemberment as they deem requisite for future peace and security». The Soviet delegation did not insist on the unity of Germany because the allies were counting their chickens before they were hatched (though the enemy was lethally wounded). It was clear that the main battles for the post-war world order were still ahead.

The Potsdam Conference was held from 17 July to 2 August 1945 (in some older documents it is also referred to as the Berlin Conference held by Soviet, US and British leaders) with the demilitarization, democratization, decentralization and denazification of Germany in focus. The Big Three agreed to completely disarm am demilitarize the country, to do away with all armed forces, SS, SA, SD and Gestapo, to destroy the German industrial war-potential through the destruction or control of all industry with military potential and to prosecute military criminals. Any Nazi-ideology oriented or military activity was to be banned. The political life of Germany was to be based on democratic basis.

Unlike in Yalta, the issue of partition was not included into the agenda. The allies said they did not plan to exterminate German people or make them slaves. They agreed to take steps to guarantee that Germany would not threaten its neighbors or the world peace anymore. The conference decided that economically Germany should remain as one entity. Political parties’ activities were to be fostered and key administrative structures were to be established.

The ensued partition of Germany at the end of 1940s took place upon the initiative of Western powers, not the Soviet Union. At that, the unification of Germany in 1990 was impossible without Moscow’s benevolent attitude.

Now the question is: who threatens the European security today? Is it Russia, the successor to the Soviet Union, the winner in WWII, the country which is known to be a consistent opponent of Neo-Nazism in any form? Or those who connive at the revival of Neo-Nazism in the heart of the continent under the pretext of integrating Ukraine into Europe as they supposedly share the same values? Is it not the pattern of defeated Germany that the West uses to destroy the state of Ukraine today?
Tags: Germany Russia USSR