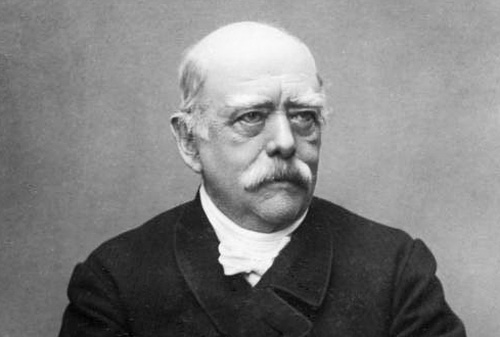 …Angela, you know, I have always been against ladies’ presence in public affairs and I have not changed my viewpoint so far. Twice I had luck in my life. Firstly, I used to live in the days when ladies were absolutely not allowed to German’s politics. Secondly, I was born on the April Fools’ Day to become a diplomat.

So, Frau Bundeskanzlerin, I have been watching you rule the country from my family vault and now my patience is lost. You have to listen to what I’ll tell you from my estate in Friedrichsruh. It’s a pity you have never come here to visit my grave and ask my advice. Looks I did right ordering grenadiers to give Poles a rough ride and have no mercy because hardly anybody else in Europe deserved thrashing more than them. Yes, you got it right, I mean your grandfather, a Pole by origin. He inherited the national traits of his tribe and made you inherit them too.

Now I’d like to make you remember the rules I introduced for German diplomats century and a half ago. Breaching them boded trouble for the nation. This is the first rule, Angela:

«Stupidity is a gift of God that should not be used».

To put it bluntly, a stateswoman should not be more stupid than her fellow citizens. The most serious form of stupidity is to believe that you are smarter than them. Just look around and answer the question – how many Germans support your alliance with Anglo-Saxons? How many Germans approve your attacks on Russia? Are you sure you see the difference between a big political game and a woman’s intrigue?

Let me remind you the second rule of German politics so that you would not mix these things up:

«The only sound basis for a large state is its egoism and not romanticism».

Where is the state egoism in your policy? Is it your commitment to closer relations with the US President? It’s a hope against hope. Whatever you sacrifice to please Obama, it will bring bad luck to Germans. Americans have a reason to stir up trouble in Europe, why help them? Do not forget that the third rule of German politics says:

«Whatever is at rest should not be set in motion. A government must not waver once it has chosen its course. It must not look to the left or right but go forward».

Germany has once chosen Ostpolitik and that was the best choice. But after the collapse of the Soviet Union you fell victim to greed. You wanted Russia to be pushed out further and further. Now you and Americans are turning Europe into a military camp.

Germany put on soldier’s boots and stepped on the Serbian ground. You forgot what I said:

«The whole of the Balkans is not worth the bones of a single Pomeranian grenadier»,

«One day the great European War will come out of some damned foolish thing in the Balkans».

You spend billions of Euros on Kosovo. The first thing I would do being in your shoes is to hang those Albanian murderers that you made come to power. There is nothing to expect from them but low tricks and plundering.

Finally, you messed with the Russians having forgotten the main secret of German politics:

«Make a good treaty with Russia».

You should read my memoirs and learn by heart what I said many years ago:

«Never fight against Russians. Your every cunning will be responded by their unpredictable stupidity»,

«This inviolable state of the Russian nation is strong in its climate, its spaces and limitations of the needs».

You should also take into account, Angela, that a Russian harnesses his horse slowly but drives fast. Putin’s patience has its limits. If he starts to act you’ll be in a deep trouble. You collude with Anglo-Saxons. Nothing could be more stupid.

These guys turn a blind eye on the fact that the Yeltsin’s Russia is gone. A new Russia has appeared headed by Putin. It’s not weak and pliant any more. Today’s Russia is strong again and ready to stand up for itself. You should realize who you deal with. Read once again what I wrote:

«Do not expect that once taking advantage of Russia’s weakness, you will receive dividends forever. Russians always come for their money. And when they come – do not rely on agreement signed by you, you are supposed to justify. They are not worth the paper it is written. Therefore, with the Russian is to play fair or do not play».

Angela, perhaps you opted to provoke Russians into getting mired in Ukraine because you remember my words that in order to deprive Russia of its power, you need to separate it from Ukraine? Come on, you cannot formulate a concrete goal if it is based on a mere speculation! Many European politicians say that without Bavaria Germany will become a weedy castrate, but nobody is going to try it, no matter how many idiots are dreaming of secession from Germany there.

You follow Anglo-Saxons who don’t think about depriving Russia of its imperial status. They want to destroy it. Do you really believe Germany would benefit if there were no Russia in Europe? Do you really believe this baloney about European values and common interests? Remember I was rebuked for keeping away from forming coalitions. A French newspaper wrote that I suffered from nightmares because of prospects for Germany to become part of a coalition. True, I was afraid of coalitions because I could not sleep at nights fearful that my partners steal my possessions. I was also accused of creating a secret fund to bribe the press and calling journalists «moral poisoners of wells». You know what I think about them. «Journalist is a person who has mistaken his calling». They persecute people because of their complex of inferiority. I bribed them to make German wells safe for drinking. These guys have already poisoned German minds, as well as yours, I’m afraid.

No need to take seriously those diplomatic dumbbells trying to reshape the world so that it would look like a Christmas tree in a Prussian military barrack. Believe me, the world doesn’t want to be reshaped, and there is no need to do it. Politics is the art of the possible, the attainable – the art of the next best no matter how abhorrent it may seem to be. In Russia I learned the word «nichego!» («it is nothing») used when they face really hard times. This word connotes with great wisdom and patience – the qualities you should acquire, Frau Federal Chancellor, and that would be my last advice to you.