Only Future for Non-Alligned with Russia and China against the Empire? 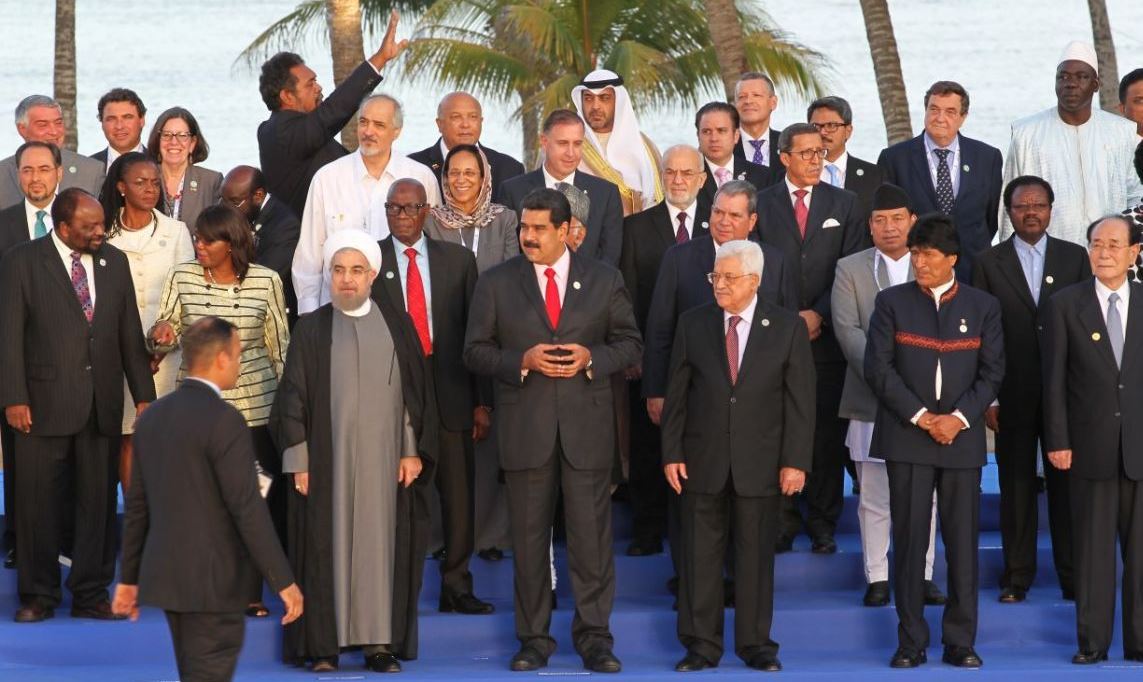 The summit of the Non-Aligned Movement (NAM) came and went in Isla Margarita, Venezuela, virtually invisible to Western corporate media.

NAM nowadays congregates every African nation except South Sudan; most of Latin America – except Brazil, Argentina and Mexico (they are observers); and most of Asia and the Middle East (China is an observer).

So what this formidable collection of globally representative nation-states came up with? Apparently not much – except a long final document that few will read, calling for traditional NAM themes such as non-interference and pledging global peace and cooperation.

After Iran passed the baton, Venezuela now chairs NAM for the next three years – which will be rocked by extreme social/politico/economic turbulence (this is a good summary of where we stand). President Nicolas Maduro went no holds barred to denounce a Washington offensive in Latin America and particularly against his administration, bent on regime change via an «economic war». His diagnostic is essentially correct.

And that nails the problem if you’re non-aligned in the digital, liquid modernity era; geopolitically, and geoeconomically, you’re an easy prey to all manner of algorithmic manipulations. Your nation doesn’t even have to be brought down to «order» – as in the Washington consensus – via a coup; it’s all essentially virtual.

The oil price war – conducted mostly by Saudi Arabia, and relying on electronic speculation – has devastated the Venezuelan economy, whose budget, to the extent of 96%, depends on oil exports. Food and medicine scarcity has reached alarming levels – as much as the inflation rate, arguably the highest on the planet at the moment.

In parallel meetings, Caracas has been desperately striving to find some consensus to freeze global oil production before OPEC’s next crucial meeting by the end of the month in Alger. The Venezuelan government has correctly identified that a politicized OPEC, during the Saudi-controlled oil price war, was bent on hitting Iran, Russia and Venezuela. Maduro now proposes that OPEC should stop operating in the free market because there’s significant overproduction.

Electronic manipulation rules. Yet politics, of course, still plays a role; in these oil market discussions as well as in the recent Mercosur decision to prevent Venezuela from exercizing the temporary presidency of the South American trade bloc.

So during NAM Maduro strove to find support among his few remaining allies, such as Rafael Correa from Ecuador, Raúl Castro from Cuba, Evo Morales from Bolivia and Hassan Rouhani from Iran. Yet none of these have much of a way of influencing Saudi Arabia’s – and His Masters’ Voice’s – game.

It was not only Venezuela. Quite a few nations at the summit predictably accused the Exceptionalists of «interference». But it was up to the Democratic Republic of North Korea (DPRK) to go no (surrealist) holds barred, actually threatening to blow things up with no warning.

Those were the days of Nehru, Sukarno, Nasser and Tito in the early 1960s. Not to mention NAM’s seminal event – the 1955 Bandung Conference hosted by Indonesia’s Sukarno. That’s when a who’s who of the former «Third World», now Global South – including Sukarno, Nasser, Nehru, Tito, Ho Chi Minh, Zhou Enlai, Sihanouk, U Thant and Indira Gandhi – adopted a «declaration on promotion of world peace and cooperation» and collectively pledged to remain neutral in the Cold War.

The spirit of Bandung is somewhat alive – as NAM remains committed against imperialism, colonialism, neocolonialism, racism, foreign aggression/interference, occupation and hegemony. Call it NAM against the Empire. Yet the Empire, post-Shock and Awe, is way more subtle in its interference mechanisms, privileging myriad declinations of Hybrid War – from color revolutions to economic war to the latest institutional/parliamentary / judiciary / media impeachment/regime change farce in Brazil.

Cold War also persists, now rebranded Cold War 2.0, essentially pitting NATO against Russia, in parallel to the containment of China via the «pivot to Asia». Russia and China are the Pentagon’s avowed top two «threats» – which for all practical purposes should align their own strategic partnership with an extended NAM strategic partnership.

The spirit of NAM would prevent it from being aligned within a geopolitical/military structure; but as China advances One Belt, One Road (OBOR), the New Silk Roads, into which the Russia-driven Eurasia Economic Union (EEU) will eventually merge, that is progress according to the interests of NAM.

These – OBOR and EEU – are the only integration project in the world for the foreseeable future, centered on Eurasia, of course, but with multiple ramifications across Asia, Africa and even Latin America; the Chinese-proposed Atlantic-Pacific railway, for instance, from Brazil to Peru, can be seen as a South American Silk Road.

NAM’s holy trinity of multilateralism, equality and mutual non-aggression is also replicated by the BRICS union – which next month in their summit in Goa should be advancing practical development mechanisms such as the New Development Bank (NDB) – which, for all practical purposes, also will progress according to the interests of the Global South.

A way out for Venezuela from now on is to strengthen alliances with Latin American integration groups side by side with NAM and in connection with BRICS and the G20 – all striving for a multipolar world and away from the pathetically medieval punishment incarnated by Exceptionalist sanctions.

An extra key item was discussed at the summit; a «reorganization process», as Maduro coined it, of the UN system, especially the UN Security Council. In realpolitik terms, that’s not gonna happen. As it stands, Russia is the only permanent member open for this kind of discussion.

Realpolitik also dictates that NAM nations will continue to be marginalized – and ruthlessly exploited – by sophisticated neocolonial mechanisms embedded in the unipolar logic. So it’s NAM against Exceptionalistan; NAM against neoliberal globalization and its torrents of inequality; and NAM against casino capitalism.

It will be a long and winding road. NAM may not have much except a Jakarta-based Center for South-South Technical Cooperation, and a number of joint committees with the Group of 77 developing nations. But they do hold the moral high ground in the fight for a more equal, balanced and decent world.