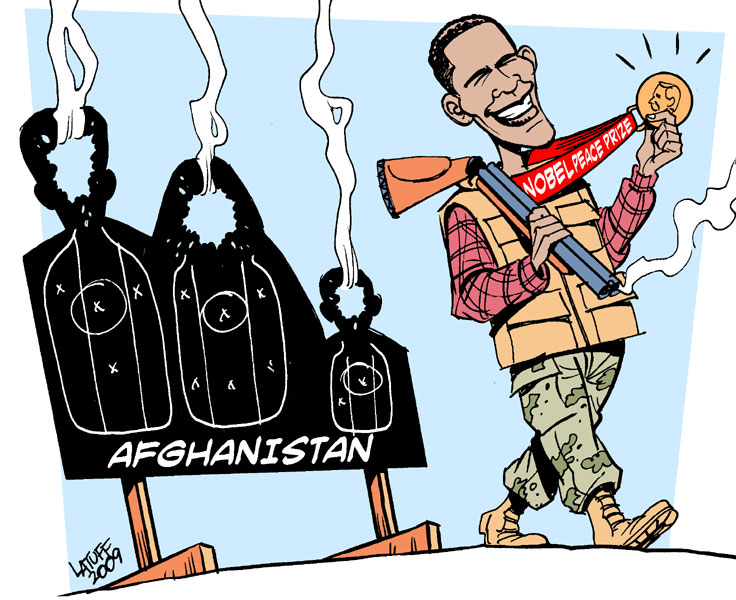 In his speech to the United Nations General Assembly last week, Obama sounded less statesman and more salesman, with the usual pitch that American leadership is all benevolent and virtuous. America is pursuing, America is committed, America is prepared… and so on and on went the tiresome egocentric rhetoric.

But like a dodgy salesman, the “goods” that Obama is hawking are downright fake. Caveat Emptor: buy it at your peril. Not only that, but the entire presentation to the potential buyers is littered with sly mendacity and ridiculous falsification of world events.

The US president used his address to the 69th UN session not to genuinely explore a collective solution to pressing world problems but rather as an opportunity to indulge in “American exceptionalism” – the deluded notion that America is magnificent and superior to all other nations. Obama’s speech was a breathtaking falsification of the real causes underlying many of the security threats facing the world, and an opportunity for him to shift the blame on to others.

As Russia’s foreign minister Sergei Lavrov pointed out, Obama disgracefully labelled Russia as a global threat along with the Ebola epidemic in Africa and Islamic State terrorism in the Middle East.

Obama told UN delegates: “As we gather here, an outbreak of Ebola overwhelms public health systems in West Africa, and threatens to move rapidly across borders. Russian aggression in Europe recalls the days when large nations trampled small ones in pursuit of territorial ambition. The brutality of terrorists in Syria and Iraq forces us to look into the heart of darkness.”

He then went on to corral the rest of the world under American leadership. “We call upon others to join us on the right side of history – for while small gains can be won at the barrel of a gun, they will ultimately be turned back if enough voices support the freedom of nations and peoples to make their own decisions.”

It was an astounding distortion of history in which the culpable role of the US in multiple conflicts is glibly airbrushed out of the picture, replaced by Russia in the case of Ukraine, instead of acknowledging the destabilising role that Washington played by orchestrating a coup in that country.

Obama skimmed over conflicts in Afghanistan, Iraq, Syria, Libya, Palestine, Ukraine casting them as unconnected or the fault of someone else, yet in all these conflicts the hand of the US is indelibly present.

As for the “brutality of terrorists in Syria and Iraq”, Obama obfuscated by telling us to “look into the heart of darkness” – whatever that platitude means – instead of looking into the CIA payrolls and arms inventories to see how Washington has directed these “jihadist” mercenaries in its regime-change operation in Syria.

The upshot is not only a distortion of the actual cause-and-effect of world problems, and not only a slanderous misattribution of blame, the insidious outcome is that the real culprit is rehabilitated as a saviour to the world. “Join us on the right side of history,” Obama entreated the assembled nations, as if the murder of 1.5 million Iraqis from America’s 2003 illegal war never happened.

Since Obama made his address at the UN on Wednesday, US-led air strikes have continued unabated on Syria and Iraq. It is significant that the bombing campaign in Syria within a matter of days is already on a much greater scale than in Iraq, where US warplanes began conducting air strikes against IS militants a month ago. This is because regime change in Syria is the real American objective behind the whole anti-IS ruse.

The British are now sending fighter jets to join air strikes in Iraq, along with the US and French. The American-approved Baghdad government (formed after Washington insisted Nouri al Maliki had to go) has given its consent to the US-led aerial campaign. But this is not the case in Syria.

That lack of consent, plus the absence of the UN Security Council mandate, makes the US-led intervention in Syria illegal, as Moscow rightly points out. It does not afford any legality or legitimacy to the American-led air strikes no matter how many states have joined the so-called coalition, and no matter that these states are Arab.

Under international law, a country or group of countries does not have the right to launch military strikes on another unless there is a case of self-defence. That is not the scenario in Syria and the US-led coalition operating there. That is why Obama is talking up the threat of terrorists and press ganging a coalition of nations to join the US in its bombing campaign. This is just a fig leaf of Washington appearing to have some legal mandate, and to disguise the bare fact that the US is committing an act of aggression on a sovereign state for its geopolitical agenda of regime change.

This all stems from the fact that the US, as Sergei Lavrov points out, “has enshrined in its national security doctrine the right to use force at its discretion, regardless of UN Security Council decisions or international law”.

In his address to the UN General Assembly the previous year, Obama declared: “The United States of America is prepared to use all elements of our power, including military force, to secure our core interests in the region.”

This gives real meaning to the concept of “American exceptionalism”. American leaders consider their government to be above the law and to have the prerogative to use violence unilaterally. All other nations must abide by the UN Charter and international law forbidding aggression, but not the US.

So when Obama this year exhorted: “Fellow delegates, we come together as United Nations with a choice to make. We can renew the international system that has enabled so much progress, or allow ourselves to be pulled back by an undertow of instability” – the fundamental problem challenging world peace is that it is the US that is unequivocally not prepared to “renew the international system”.

A telling contradiction in Obama’s address was when he said: “The United States will never shy away from defending our interests, but nor will we shrink from the promise of this institution and its Universal Declaration of Human Rights”.

Notice that Obama did not say the UN Charter, but rather the more vague Universal Declaration of Human Rights, because the Charter’s express legal prohibition on unilateral violence would make Obama’s words explicitly self-indicting.

In typical ahistorical American thinking, Obama blamed the root of conflict on some mythical notion of terrorism. “It is time for a new compact among the civilized peoples of this world to eradicate war at its most fundamental source: the corruption of young minds by violent ideology.”

More fundamental is the fact that conflict arises when certain states see themselves above the law in pursuit of their geopolitical interests with unilateral violence. The US stands out in this regard as the biggest culprit of lawlessness. Since the Second World War, the US has attacked, invaded or subverted upwards of 100 nations in pursuit of its core interests.

And yet the American president closed his address to the UN with this nonsensical schmalz. “And at this crossroads, I can promise you that the United States of America will not be distracted or deterred from what must be done. We are heirs to a proud legacy of freedom, and we are prepared to do what is necessary to secure that legacy for generations to come. Join us in this common mission, for today’s children and tomorrow’s.”

By contrast, Russia’s Lavrov commented on how Russian diplomacy works in practice, not in some rarified mythical way, as Obama arrogantly asserts. “On the contrary, we are interested in putting out the flames of conflicts around the world through a fair dialogue based on equality of rights and mutual respect rather than through unilateral accusations and shifting the responsibility on someone else,” said Lavrov.

Moscowcan rightly refer to its efforts at brokering a ceasefire in Ukraine and a negotiated settlement between the Kiev regime and the ethnic Russian separatists in the east of the country. Russian president Vladimir Putin has personally worked with Didier Burkhalter, head of the Organisation for Security and Cooperation in Europe, since May to create a peaceful resolution of the conflict. The latest result being the ceasefire brokered on September 5 in Minsk.

Meanwhile, Washington has only fuelled the conflict by first of all subverting Ukrainian sovereignty with the February coup against an elected government, then funnelling military aid to the CIA-backed regime, and encouraging this reactionary regime to adopt a heavy-handed policy toward dissenting populations.

History shows us that when states ride roughshod over international law, as during the 1930s when the League of Nations was made a mockery by rogue powers, the danger of war is greatly magnified. The lawless conduct of America and its mockery of the UN Charter is today the greatest threat to world peace.

Salesman Obama might try selling the world a vehicle of American leadership for peace. But scratch the surface and blow off the rhetorical webs, and it’s obvious that this American vehicle is a hollowed-out dangerous wreck. Caveat Emptor.