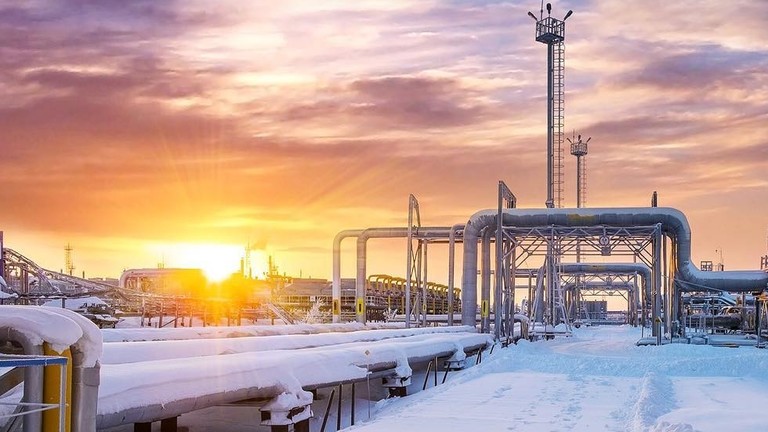 Get short URL
©  Global Look Press / Gazprom
Austria will continue buying Russian gas despite US pressure and fear-mongering from Poland and Ukraine about dangers to European energy security. The cost of importing US gas is just not right, says its Chancellor Sebastian Kurz.

Meeting with US President Donald Trump in Washington on Wednesday, the 32-year-old chancellor stood up for Austria’s continued support for the Nord Stream 2 pipeline, which is due to be completed later this year.

Austria wants a secure gas supply, Kurz told local media after meeting with Trump, adding that Vienna has no problem with buying liquid natural gas (LNG) from the US, “but as long as the price is better, Russia is more attractive as a partner, as Trump can certainly understand as a former businessman.”

The price of US imports is “currently not competitive,” Kurz said, so the gas for Austria “will continue to come mainly from Russia” in the foreseeable future.

ALSO ON RT.COMNo way back for Nord Stream 2 pipeline project – GermanyGermany has also pushed back on US pressure to halt the pipeline in recent days, with the new leader of the ruling CDU party Annegret Kramp-Karrenbauer describing the project as something that “just can’t be turned back” and adding that Germany has “quite legitimate economic interests in energy supply.”

Once completed, Nord Stream 2 will have the capacity to stream 110 million cubic meters of gas from Russia to Germany, and onwards into Europe. While this makes Berlin and Vienna happy, the prospect is apparently keeping the authorities in Warsaw and Kiev – who currently profit from transit fees on Russian gas – awake at night.

On Tuesday, two Polish diplomats from Warsaw’s mission to NATO published an appeal for the alliance to treat natural gas supplies as a major security issue, and to throw its weight behind establishing Ukraine as an alternative gas supply hub to counter Russia.

Though ostensibly acting in their personal capacity, Dominik P. Jankowski is a political adviser for the Polish mission to NATO, and Julian Wieczorkiewicz works for the same mission as an expert in energy security. Their pitch appeared on the pages of National Interest, a Washington-based magazine of the think tank that, back in 2016, hosted then-candidate Donald Trump’s flagship foreign policy speech.

Once Nord Stream 2 is complete, Russian gas deliveries will be able to bypass Poland and Ukraine entirely, which Wieczorkiewicz and Jankowski obviously find alarming. Ukraine, they point out, earns roughly $3 billion in transit fees per year, which is almost Kiev’s entire $3.6 billion military budget from 2017. How dare Moscow deprive Ukraine of money to fund its war against ‚Russian aggression’!

The Russia-hating establishment in the US is also on board with this narrative: a January 2018 report commissioned by Senate Democrats also argued Nord Stream 2 was endangering Ukraine’s gas revenues. What’s left unsaid, but definitely kept in mind, is that bypassing Ukraine and Poland would deprive Washington of the ability to interrupt gas deliveries to Europe, while blaming Russia for it.

ALSO ON RT.COMPoland’s gas pipeline ambition is just a pipe dream, industry expert tells RTWieczorkiewicz and Jankowski’s proposed “solution” is to make Ukraine a depot for natural gas from Norway and the US, arguing that Washington is the world’s largest LNG producer and that in 2018 Poland demonstrated that US-made LNG can compete with Russian gas on European markets. There is only one problem: Norwegian exports are actually declining, and the US simply can’t make up the difference.

A year ago, US Energy Secretary Rick Perry argued that Washington “is not just exporting energy, we’re exporting freedom.” The choice of where to buy energy offered to allies in Europe is freedom, he said, “and that kind of freedom is priceless.”

Economic reality does not care about geopolitical pipe dreams, however. Statistics from 2017 show that Europe imported 164 billion cubic meters of gas from Russia, while Europe and Turkey combined accounted for only around 3 billion cubic meters of US LNG. More recent EU data shows that Russian imports only increased in 2018, to over 40 percent, while US imports weren’t big enough to register by themselves, but rather fall into the “other” category.

ALSO ON RT.COMRussia outmaneuvers US on gas supplies to EuropeA report on the state of Europe’s LNG infrastructure in 2018, produced by the international law firm King & Spalding, shows Eastern Europe with only one LNG import terminal – in Poland’s Swinoujscie – and one floating storage and regasification (FSRU) facility in Lithuania’s Klaipeda. That’s not exactly a feasible alternative to Russian pipelines, by any stretch of imagination.

While the US is indeed a growing producer and exporter of LNG, it currently has only two operational liquefaction terminals – one in Alaska and one in Louisiana – with two more under construction and one in Texas whose opening was delayed until September 2019 at the earliest, reportedly due to flooding damage during the 2017 Hurricane Harvey.

Then there is old-fashioned supply and demand. In 2018, China and Japan were willing to buy US gas at much higher prices – $8 and up per million BTU – compared to $6 50 in Europe, for instance – so that’s where the US LNG went. The trade war between the US and China launched by the Trump administration has since resulted in higher tariffs on US LNG, making Russian gas more attractive to Beijing. Gazprom’s new pipeline to China is expected to open ahead of schedule in early December 2019. Meanwhile, there is no indication the price of US gas in Europe has become any more competitive.

ALSO ON RT.COMRussia’s Gazprom to start China gas pipeline by December 1Even the authors of the “sanctions bill from hell”aimed against Russia have conceded that it does not specifically target Nord Stream 2. Dubbed ‘DASKA,’ the proposal was reintroduced last week by Senators Bob Menendez (D-New Jersey) and Lindsey Graham (R-South Carolina).

“There’s no specific provision here on Nord Stream 2,” Menendez told reporters in Brussels on Monday, adding that the US was seeking “close collaboration” with Europe on perfecting anti-Russian sanctions.

Simply put, giving up Russian gas imports would be “economic suicide” for the EU, as geopolitical expert Dr. Pierre-Emmanuel Thomann told RT last month. EU and NATO allies have already suffered the brunt of economic consequences from Washington’s obsession with sanctions against Russia since 2014. As statements from German and Austrian leaders clearly show, giving up gas would be a step too far.