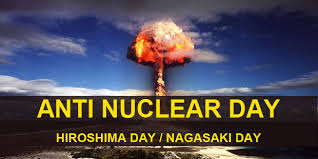 Dear friends,
As you are well aware, yesterday marked the 74th anniversary of the ghastly U.S. nuclear attack on the city of Hiroshima, followed three days later by the atomic bombing of Nagasaki. The Canadian Peace Congress has issued a statement commemorating this ‚Day of Infamy‘, and its enduring significance today, which we post below (and attach in leaflet format) for your consideration.
Executive, Canadian Peace Congress
____________________________________________________
On the enduring significance of Hiroshima
A statement from the Canadian Peace Congress
On August 6 and 9, 1945, the U.S. military bombed the cities of Hiroshima and Nagasaki with nuclear weapons. Over 200,000 people, mostly civilians, died instantly or later succumbed to burns, malnutrition, and radiation-related illnesses. Many of their descendants carry the affected genes and pass them onto their children. Those acts will forever be remembered in infamy as the first time the devastating impact of nuclear warfare was unleashed.
There was absolutely no justification for this wanton attack – the worst crime against humanity in history (paralleled only by the Holocaust). Unclassified documents have confirmed there was no truth to the constructed ‘myth’ that the atomic attack was necessary to spare the lives of U.S. servicemen and end the war. Rather, the U.S. Truman Administration, fearing an imminent victory for Soviet forces in the Far East, dropped the bomb as a ‘showcase’ demonstration of U.S. military superiority. As such, it was the first act of the Cold War that would dominate international politics and spur the nuclear arms race for the next half-century.
74 years later those nuclear weapons arsenals remain the principle threat – a sword of Damocles – hanging over the heads of all humanity and our global environment. Despite the hopes and demands of the world’s people for the complete elimination of all nuclear stockpiles, disarmament talks remain stalled and important treaties, such as the Anti-Ballistic Missile (ABM) and the Intermediate Nuclear Forces (INF) treaties, and the Iranian nuclear deal (JCPOA) have been unilaterally cancelled by Washington, setting the stage for another devastating round of the arms race.
Instead the leading nuclear states – in the first place, U.S. imperialism – are pressing forward with plans to modernize nuclear arsenals and extend the arms race into outer space (Ballistic Missile Defence). For this reason, the anniversary of Hiroshima and Nagasaki assumes even greater significance and urgency this year.
We are not powerless in the face of this alarming drift toward nuclear calamity and environmental devastation. We need to take mass action to demand Canada take a firm stand promoting peace, disarmament, mutual respect and understanding, rejecting militarism, aggression and war.
For starters, we can engage actively in the coming federal election campaign by demanding Canada sign and ratify the Treaty on the Prohibition of Nuclear Weapons (TPNW). And we should call on every party, and every candidate, to take a forthright stand in favour of this vital initiative.
The real challenge is to re-build a grassroots peace constituency in this country made up of working people, women, youth, indigenous peoples, those living below the poverty line, the homeless and disenfranchised, environmental and social activists and all who cherish peace. One that is powerful and united around a “Peace Alternative” that would take our country in a fundamentally different direction, and win a truly independent foreign policy based on disarmament and peace, and respect for the principles of the UN Charter and international law.
That is the best way to remember and pay tribute to the victims of Hiroshima and Nagasaki, and to all victims of economic and military aggression, occupation and war!