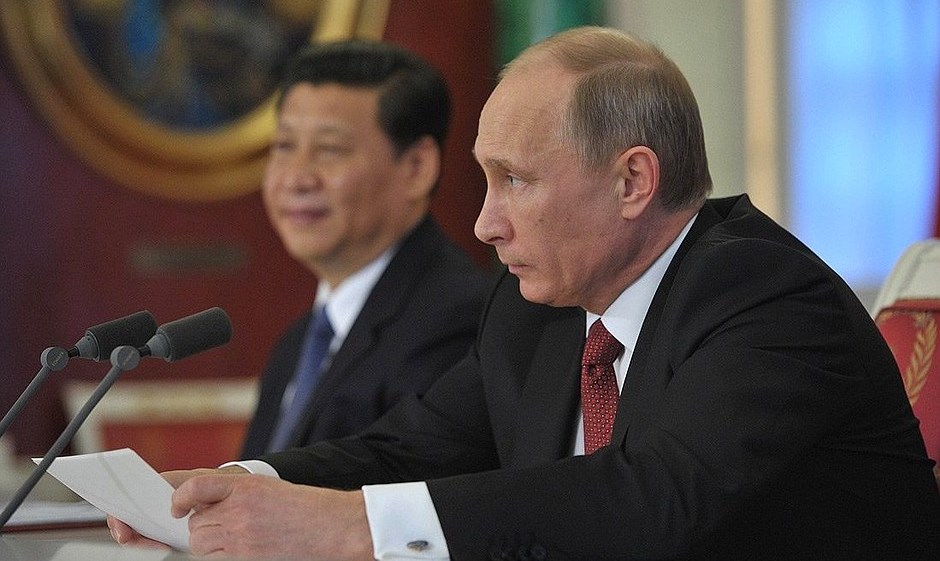 The United States’ hegemonic dominance in the world is heading to the exits. The decline in US unipolar power has been underway for several years, in line with the emergence of a multipolar world. This week, Russia and China showed important resolve to face down American bully tactics over North Korea. The confrontation suggests a turning point in the transition from American world dominance to a multipolar one.

US President Donald Trump reiterated the possibility of military attack on North Korea while in Poland this week. This was also while Washington was hectoring China and Russia to join in a tougher response to North Korea over its ballistic missile launch days before – the former two nations themselves having recently been sanctioned anew by the US. Talk about American audacity and double think.

However, the crass arrogance shown by the US seems to have hit a new limit of tolerance in Moscow and Beijing. Both are beginning to demonstrate a loss of patience with the bumptious, insufferable Americans.

But Russia and China’s stance this time to the Americans had significantly stiffened. Both explicitly warned the US against taking military action against North Korea.

Moreover, Russia and China said that they would oppose Washington imposing further sanctions on the government of Kim Jong-un. The latter has already been subjected to six rounds of US-led sanctions.

In short, the American bully is finding that it is no longer able to dictate its unilateral way.

Addressing an emergency session of the United Nations Security Council, the Russian and Chinese ambassadors rejected the shrill American call for «global action to a global threat». Russian envoy Vladimir Safronkov stood firmly with his Chinese counterpart, saying that threatened American military action was simply not an option, and that a different policy was needed from the failed American one of slapping ever-more sanctions on North Korea.

One can imagine the exasperation felt within Washington of being bluntly told «no» to its invariable, self-anointed belligerence.

The alternative route being proposed by Russia and China was the «radical» one – radical from the American point of view – of diplomacy. It has perhaps taken the Russians and Chinese overdue time to reach this point. But what is remarkably apparent now is that they are asserting themselves against the US with increased confidence. And what they are asserting in this case is an eminently reasonable solution to the Korean crisis. They are calling for a freeze on Pyongyang’s nuclear weapons program in conjunction with the US freezing its constant military exercises on the peninsula, as well as withdrawing its anti-missile THAAD system. The next step is to then hold multilateral negotiations for a comprehensive peaceful settlement, without preconditions.

Such an eminently reasonable approach is anathema to the Americans. Because it negates their unilateral arrogance and self-righteousness to dictate terms.

This is a significant development, one that portends a new determination by Russia and China to confront the American bully head-on. For too long, Washington has gotten away with outrageous aggression, lawlessness, hypocrisy and absurd hubris, not just over Korea but on countless other international issues. On the world stage it behaves like a schoolyard bully, or perhaps more accurately that should be a street thug. Going around beating up other people, usually the weak, as it likes. Then when Washington feels particularly affronted about some perceived slight, it invokes international law and righteousness.

This week, what we saw over the North Korea missile launch and the typical American over-reaction was Russia and China saying to Washington: your days of self-licensing aggression and abusing international law are over; your American unipolar hegemony is redundant.

Welcome to the multipolar world forged largely by Russia and China where all nations must abide by international norms and law, principally the paramount pursuit of diplomacy.

Oh the shock to American arrogance to receive such a rude awakening.

The lawlessness of American «exceptionalism» is a theme that Russian President Vladimir Putin has been constantly hammering over the past decade. But it seems now that Russia and China are strong enough politically, economically and militarily to begin asserting and acting on the conviction that the days of American arrogance and lawlessness are indeed over. It is no coincidence that the firm Russian-Chinese opposition to American aggression over North Korea came at the same time that Putin was hosting his counterpart President Xi Jinping in Moscow, where both leaders hailed an even deeper Sino-Russian strategic alliance.

Moscow and Beijing censured North Korea over its 11th missile launch so far this year. They said it violated UN sanctions imposed on Pyongyang since it first exploded a nuclear warhead in 2006. Still, they sought to put a proper perspective on the event, rather than reflexively demonizing North Korea as the Americans never cease to do.

The intercontinental ballistic missile (ICBM) launched this week by North Korea was not armed with a warhead but Pyongyang said it now has the capability to do so and to strike anywhere on the globe. The trajectory of the ICBM indicates that North Korea could now hit the US state of Alaska. That heralds a major breakthrough in North Korea’s military capability. Earlier this year, President Trump claimed that North Korea would never be allowed to reach that point. Well, it just did this week.

Nevertheless, Russia and China realize that the Korean crisis is a complex issue, not the simplistic narrative put out by Washington about a «rogue regime» threatening world peace. Moscow and Beijing are well aware that Washington is very much part of the problem, with its relentless military exercises and provocative threats to North Korea’s sovereignty.

Russia and China understand that the only reasonable solution is not reckless escalation, but a negotiated engagement by all sides, including North Korea, South Korea, the US, Japan, China and Russia. Past multilateral negotiations have come unstuck largely because of Washington’s high-handed imperious attitude. Winding down conflict on the Korean Peninsula necessitates the winding down of military forces by all sides, and a primary responsibility for that lies with the US, the external protagonist in the region.

As the Russia-China strategic alliance grows ever stronger heralding a «post-West» world order, as Russian foreign minister Sergey Lavrov put it, one which was dominated by American capitalism, the US petrodollar and its military machine, it seems unmistakable that both Russia and China have reached a practical limit of tolerance to Washington’s lawless arrogance.

In recent weeks, Washington has slapped more sanctions on both Russia and China, conducted provocative military incursions into their territorial domains, and continued to disparage them with media distortions. Washington possesses thousands of ICBMs, test-fires them all the time, and installs missile systems around Russian and Chinese territory. Washington has waged or covertly sponsored criminal wars across the Middle East over the past two decades, resulting in millions of innocent deaths and spawning of terror groups.

North Korea has attacked no-one, has an arsenal of perhaps 10 nuclear weapons and conducts its missile tests far from any of its neighbor’s territory.

Yet the lawless, mass-murdering Americans – the only nation to have actually dropped nuclear weapons on civilian populations – have the audacity to declare North Korea a threat to world peace and insist on the «right» to preemptively attack Pyongyang. And if Russia and China do not acquiesce to this American demand then Washington threatens to increase more sanctions on them.

The American bully is patently beyond itself from its own megalomanic despotism. But the big, crucial difference now is that Russia and China are moving to finally put this bully in its place. The multipolar world has arrived. And the only «radical» thing that Russia and China are insisting on is that the US behaves like everyone else and abides by international law. That basic requirement is an indication of how lawless the Americans are.

Addressing bussed-in supporters in Poland’s Warsaw Square this week, Trump declared with bravado that «the West [that is, the US] will never back down».

Well, we’ll see about that. As noted, the multipolar world has arrived and America is being compelled to back down by an ascendant Russia and China who also happen to have world opinion on their side.