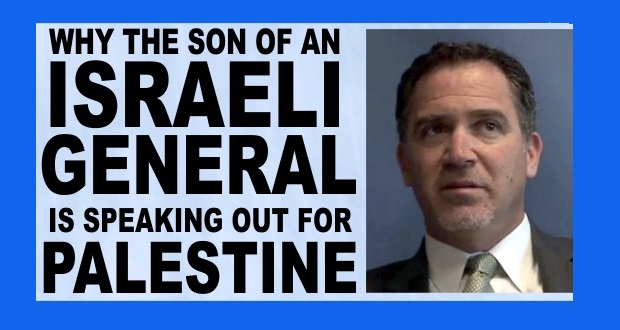 Miko Peled is an Israeli writer and activist living in the US. He was born and raised in Jerusalem. His father was the late Israeli General Matti Peled. Driven by a personal family tragedy to explore Palestine, its people and their narrative. He has written a book about his journey from the sphere of the privileged Israeli to that of the oppressed Palestinians. His book is titled “The General’s Son, Journey of an Israeli in Palestine.” Peled speaks nationally and internationally on the issue of Palestine. Peled supports the creation of a single democratic state in all of Palestine, he is also a firm supporter of BDS.

Sadly, over the last seventy years Israel has had many successes at the expense of the Palestinian people. But the one success that is the most remarkable is getting Palestinians and the world to buy into the notion that the occupation of Palestine began in 1967, and that therefore, the solution to the Palestinian question is what is known as the two State Solution. This is a manipulation of reality that would make any magician proud.

It has become completely acceptable to disregard the fact that the vast majority of Palestine has been occupied since 1948. Mentioning the ethnic cleansing of Palestine and the eradication of Palestinian towns and villages, mosques and churches, schools and homes is now considered radical.

Forty-nine years of occupation is the claim one hears over and over again, the fiftieth anniversary of the occupation is upon us, people say, and hard as I try, when I add forty-nine to the year 1948 I do not come up with 2016, but rather 1997.

There is almost complete disregard by the international community for the crimes committed by the Zionists between 1948 and 1967. The erasure of the fact that these were years marked by dispossession, massacres, and unspeakable abuse of human rights by Israel, is a truly impressive magic trick. Two small areas within Palestine that were drawn by Israel and left out of the boundaries of Israel in 1948, i.e. the West Bank and the Gaza Strip, have become recognized as Palestine. But that is not all. Not a single inch of the West Bank or the Gaza Strip is under Palestinian sovereignty. All of the Palestine, from the River to the Sea is controlled by Israel.

So when European countries recognize Palestine they too are behaving like fools in a magic show, happy to be part of the illusion of some great master of deceit. And indeed, as the world is led by the nose, fooled by the illusion of a Palestine that exists, Israel, the master of deceit, continues to shrink what little is left of Palestinian life and no one stands up to admit that the emperor has no clothes!

There is no Palestinian state, there is no Two State Solution, there is no West Bank, and there is not a single inch of Palestinian sovereignty anywhere in Palestine. “OPT” has become a rather well known acronym, used to describe the Occupied Palestinian Territories. But when we ask people to see those territories on a map, all we see is what used to be the West Bank, an area that Israel created in 1948 and then eliminated in 1967, and the Gaza Strip which exists only as a concentration camp in which Israel is allowed to commit genocide, as the world looks the other away and pretends not to see.

This begs the following questions: If the OPT are limited to the West Bank and the Gaza Strip then where are the Un-occupied Palestinian territories? Are there Palestinian territories that are not occupied? If such territories do exist, can someone please point them out on a map? Because every map I look at and every inch of Palestine that I visit is occupied. Another term that is used a great deal in connection to Palestine is “settlements.” Sometimes they are called, “illegal settlements.” Both refer largely to the Israeli colonies built in the West Bank. There is talk of “settlement expansion,” “settlement blocks,” etc. Again, this begs a question: what is the difference between the Jewish settlements in those areas and the ones built in Al-Jaleel or the Naqqab? What about the settlements built around Jerusalem or the one near Yaffa known as Tel-Aviv?

Israelis who live on Palestinian land that was stolen in 1948 like to see themselves as authentic Israelis, good liberal minded people and God forbid they are not settlers. Settlers are those “other” Israelis who live on lands that were stolen from Palestinians in 1967. But what is the difference? All of Palestine was stolen by force, and with very few exceptions, all Israeli cities and towns, villages and farms were built on land that was stolen, which makes them all illegal settlements. Once again the master of deceit is leading us all by the nose to see the world as Israel wants us to see it and there is no one to cry out: “the emperor has NO clothes!”

Between 1948-1967 Israel gained legitimacy by committing horrendous crimes and creating what they call “facts on the ground.” The 1967 conquest of the West Bank and Gaza, in which Israel completed the occupation of Palestine, shifted the focus from the territories Israel occupied in 1948 to the newly occupied territories. Now, for the past five decades Israel has been creating “facts on the ground” in those areas, which are now known as “Judea and Smaria.” But every magician, every thief and certainly a master of deceit of such proportions has to have accomplices.

Few people can actually claim not to know what Israel is doing. The international diplomatic corps is fully aware of what takes place in Palestine. The CIA and the US State Department are fully aware of every trick and every crime committed by Israel. Each and every US administration as well as the European governments has been complicit in the crimes committed by Israel. However, it is time for the rest of the world to wake up and end the illusion. The illusion that Israel has legitimacy, the illusion that Israel is somehow the answer to the holocaust and to anti-Semitism, and the illusion that some parts of Palestine are occupied while others are not. It’s time to call out loud and clear that all Israeli settlements everywhere are illegal and just as in the tale “The Emperor’s New Clothes,” the emperor had no clothes, Israel too has no legitimacy.