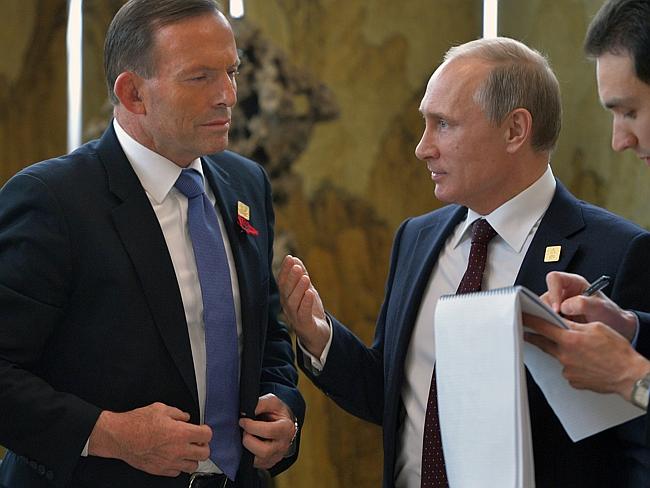 At the APEC Summit in Beijing, Australia’s Prime Minister Tony Abbott who is hosting this week’s G20 meetings in Brisbane, intimated in no uncertain terms, during a 15 minute encounter with Russian President Vladimir Putin, that Moscow was responsible for the downing of Malaysian Airlines flight MH17 over Ukraine. During the meeting, Mr Abbott is reported to have stated that “Russia had armed the rebels who shot down the aircraft and killed 38 Australians.” Mr Abbott said that “MH17 was destroyed by a missile from a launcher that had come out of Russia, was fired from inside Eastern Ukraine and then returned to Russia… [and that this] was a very serious matter.” Prime Minister Tony Abbott meets with Russian President Vladimir Putin in Beijing.

Global Research has from the outset provided extensive coverage of the downing of MH17. The evidence and analysis not only dispels Prime Minister Abbott’s accusations, it points unequivocally to a false flag attack instigated by the US-NATO supported Kiev regime, as well as a coverup by the Australian and Dutch investigators. Lest we forget, the downing of MH17 was used as a pretext by Washington to impose economic sanctions on the Russian Federation. The Western media and governments have gone to arms length to suppress and distort the evidence which points to the downing of MH17 not by a Buk missile but by a Ukrainian military aircraft. Spanish Air Traffic Controller’s Twitter Report [translated from Spanish] One of the first reports (in real time) pointing to the presence of two Ukrainian military aircraft was revealed by the Spanish air traffic controller’s twitter messages on the day of the attacks. (emphasis added) 11:48 – 17 de jul. de 2014

all this is gathered in radars, to the unbelieving, shot down by Kiev, here we know it and military air traffic control also

” 13:15 – 17 de jul. de 2014 “Here the military commanders are in control and admit that the military could be following other orders , but not, the pro-Russian”

About the author: Michel Chossudovsky is an award-winning author, Professor of Economics (emeritus) at the University of Ottawa, Founder and Director of the Centre for Research on Globalization (CRG), Montreal and Editor of the globalresearch.ca website. He is the author of The Globalization of Poverty and The New World Order (2003) and America’s “War on Terrorism”(2005). His most recent book is entitled Towards a World War III Scenario: The Dangers of Nuclear War (2011). He is also a contributor to the Encyclopaedia Britannica. His writings have been published in more than twenty languages. He can be reached at crgeditor@yahoo.com * * * * Michel Chossudovsky est directeur du Centre de recherche sur la mondialisation et professeur émérite de sciences économiques à l’Université d’Ottawa. Il est l’auteur de „Guerre et mondialisation, La vérité derrière le 11 septembre“, „La Mondialisation de la pauvreté et nouvel ordre mondial“ (best-seller international publié en plus de 10 langues). Contact : crgeditor@yahoo.com Disclaimer: The contents of this article are of sole responsibility of the author(s). The Centre for Research on Globalization will not be responsible for any inaccurate or incorrect statement in this article. The Center of Research on Globalization grants permission to cross-post original Global Research articles on community internet sites as long as the text & title are not modified. The source and the author’s copyright must be displayed