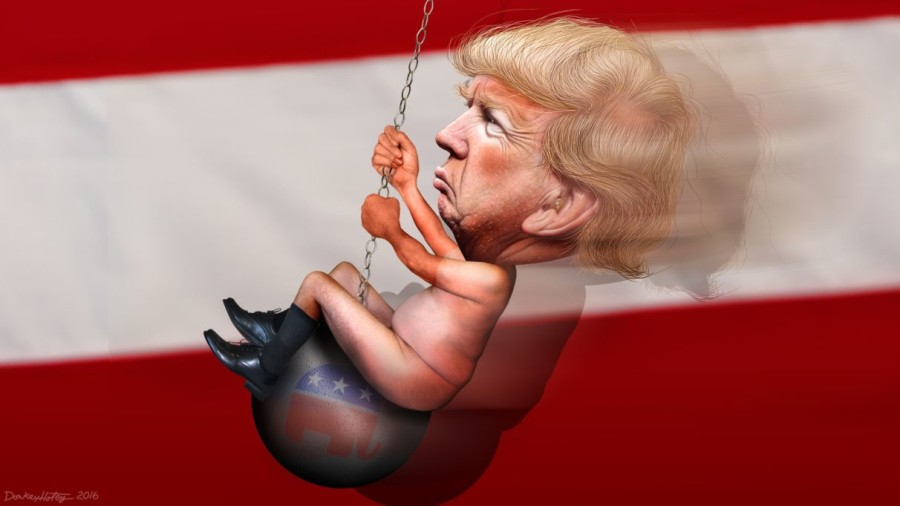 However much Donald Trump’s loyal base in the United States continues to love him (while the other half of the American population loathes him), it’s safe to say that the overwhelming consensus among foreign leaders is one of contempt mixed with fear. While not identifying Trump by name, European Union (EU) foreign policy chief Federica Mogherini left no doubt about what she thinks of the current hand on the tiller of the American ship of state in the aftermath of US withdrawal from the Iran nuclear deal:

“It seems that screaming, shouting, insulting and bullying, systematically destroying and dismantling everything that is already in place, is the mood of our times… This impulse to destroy is not leading us anywhere good … It is not solving any of our problems.”

Let’s take a look at some of the primary breakage in the wake of what some see as Trump’s bull-in-a-china-shop path of destruction:

Taken together, critics say these and similarly irresponsible actions by Trump and his team have thrown into doubt the reliability of the US as an international partner and have degraded the value of US “global leadership.” According to a recent Gallup poll (gleefully cited by MSNBC’s dreadful Rachel Maddow):

“One year into Donald Trump’s presidency, the image of US leadership is weaker worldwide than it was under his two predecessors. … With its stable approval rating of 41%, Germany has replaced the US as the top-rated global power in the world. The US is now on nearly even footing with China (31%) and barely more popular than Russia (27%) – two countries that Trump sees as rivals seeking to ‘challenge American influence, values and wealth’.”

But hold on. That sounds familiar. As Dilbert creator Scott Adams wrote in March 2016: “If you think the government is broken, and you want to send a wrecking ball to Washington D.C., Trump offers that possibility.”

To be sure, Trump has not delivered on one of his signature campaign promises, to improve ties with Russia. With some help from across The Pond, the essence of the entire Russiagate witch hunt has been to block any hope of US-Russia rapprochement, a necessary element for significant progress on almost any important international issue. By all external indications the campaign to turn Trump’s foreign policy into a repeat of that of George W. Bush but with a harsher edge has been a smashing success.

Or has it? As one commentator suggests:

“Appearances can be deceiving. The Russo-Sino-Persian axis is secretly aligned with Trump, who they know is an enemy of the Deep State/Bilderberger empire. I expect Iran to make a few concessions and Trump will come out looking stronger, just as he did in Korea. Trump believes in the ‘Great Man’ theory of history and he and Putin and Xi are secretly working together. Russia will let Trump bomb Syria (no great consequence), Xi will compromise on trade a bit (no great consequence), and Iran will probably make a few inconsequential concessions. Trump’s concessions will occur later (pulling some troops out of South Korea, letting Putin handle Syria, no serious military action against Iran). As Pepe [Escobar] has pointed out in the past, Xi will get Pakistan to lean on the Taliban and Trump will be even able to pull US troops out of Afghanistan. In the end, the Deep State will lose control of Eurasia while Trump with his false bluster will paradoxically seem strong. Hold onto your hats!”

This is all speculation of course. Evidence for such a secret alignment is scant to none, except perhaps the suspiciously meager strikes on Syria and the clearly deliberate care not to hit Russia’s forces. One also wonders why, if this were really Trump’s intention, would he not proceed in a more direct way? For that matter, why would he not appoint to a top policymaking position even a single person who conceivably could share this agenda?

One answer is that Trump is aware of the fate of the last president who tried to buck the Deep State and rein back our global meddling. On this theory he literally cannot tell a soul of his intentions, which he must keep strictly in pectore while outwardly pursuing a blustering “policy of strength” that perversely results in cutting the legs from under the very American “leadership” he pretends to champion. If such jiu-jitsu lies at the heart of Trump’s policy, he really is some kind of genius!

Another, and perhaps more likely, answer is that he is achieving the same goal not through a thought-out program but more as the product of (to him) unconnected, instinctual actions, the consequences of which he only dimly foresees. That is, Trump doesn’t necessarily have the path or the desired outcomes clearly plotted in his mind, just a gut-level sense of what he wants to do at each decision point. The result still might have some underlying internal logic which he only partly appreciates on a cognitive level.

Or maybe all the foregoing is just grasping at straws. Perhaps Trump really has no idea what he’s doing. It’s possible that through the quirks of his impulsive personality he’s just taking the decades-old thrust of America’s hegemonic bullying to its logical absurdity – with counterproductive results. The chickens of the Pox Americana are finally coming home to roost. It’s then tempting for America’s customary foreign enablers – notably those in Europe, who invariably submit supinely to every diktat from Washington, especially with respect to hostility to Russia – to recoil from the uncouth Trump and his arrogant “America First!” attitudes in effusive horror (Mogherini: “screaming, shouting, insulting and bullying, systematically destroying and dismantling.”).

In any case, if we ignore the bleating and whining from those lamenting the decline in US “leadership” we can perhaps be thankful for anything that undercuts the global hegemonic project and, perhaps in spite of the worst intentions of Trump’s appointees, moves us incrementally towards a national interest-based policy. Putting the individual issues in context, the only real question before us whether the US persists in the insane quest for unipolar world domination that shifted into high gear in 1991 and must inevitably lead to a cataclysm of unimaginable proportions; or whether there can be a soft landing into a multipolar order, where the US accepts the status of primus inter pares in concert with Russia and China, with side-understandings with Europe, India, Japan, and so forth.

Let us hope it is the latter. If so, whether that is the result of deliberate policy calculations or of policy failures is less important than the outcome itself.