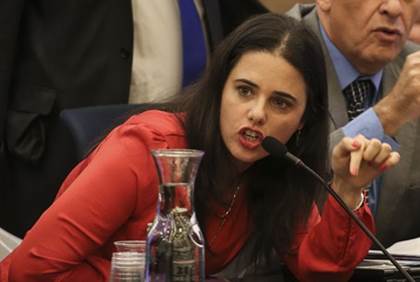 Israeli Prime Minister Benjamin Netanyahu has appointed Ayelet Shaked Justice Minister in his fourth government. In the most extremist right-wing government in Israeli history, Shaked is perhaps the most extreme. She has openly asserted “the entire Palestinian people is the enemy” and made genocidal calls for the destruction of the Palestinian nation, “including its elderly and its women, its cities and its villages, its property and its infrastructure.”
HaBayit HaYehudi (Jewish Home) Party leader Naftali Bennett and his protégé Ayelet Shaked, Haaretz/Tomer Appelbaum,