How the Senate Armed Services Committee Is Undermining Minsk II 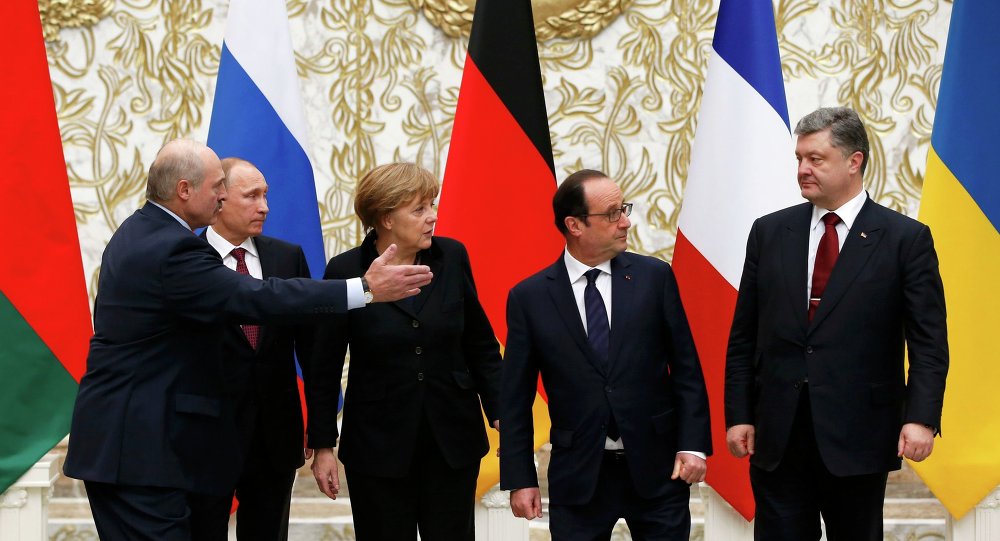 On April 28 three European foreign ministers—Serbia’s Ivica Dačić, Germany’s Frank-Walter Steinmeier and Switzerland’s Didier Burkhalter—met in their capacities as members of the OSCE’s Ministerial Troika to discuss the latest developments in eastern Ukraine. According to the OSCE, the foreign ministers “reiterated that [the Ukraine] crisis can be resolved only through peaceful means and that the political process in that regard should be advanced without delay” and “called on all sides to fully and unconditionally respect the cease-fire.”

Meanwhile, on April 26, Financial Times reported that Kiev is coming under increased pressure from Western European capitals to do its part to implement the Minsk cease-fire agreement. According to FT, German diplomats expressed frustration that Kiev is “dragging its feet” in implementing the agreement. For his part, French President Francois Holland has warned Ukrainian President Petro Poroshenko that “the only line of conduct is the full implementation of the Minsk accord.”

Yet it seems these calls for a peaceful solution to the crisis are not only falling on deaf ears, but are also purposefully being undermined, in Washington.

To wit: the same day the aforementioned troika met in Belgrade, the 28th, the Senate Armed Services Committee held a hearing on “United States Security Policy in Europe,” though perhaps, given the tenor of the hearing, it should have been held under the rubric “The Russians are Coming!”

Armed Services Committee Chairman, Senator John McCain (R-AZ), got right to the point, running down a list of Russia’s sins—real and imagined. He derided the Obama administration’s “so-called reset” policy and warned of Mr. Putin’s “neo-imperial objectives.” McCain accused Russia of violating the Minsk II cease-fire agreement and hectored NATO allies to follow the example of Poland and Estonia and increase its defense expenditures. Unbelievably, McCain closed his remarks by telling the gallery, which included a visiting delegation of Ukrainian parliamentarians, that “none of us wants to return to the Cold War.”

Depressingly, there seemed to be little daylight between McCain and the committee’s ranking member, Senator Jack Reed (D-RI). Both he and McCain have called on President Obama to “provide defense lethal assistance” to Ukraine. Only Senators Angus King (I-ME) and Joe Manchin (D-WV) expressed any skepticism towards the idea of sending lethal aid to Ukraine. The situation that pertains in the Washington of 2015, is in stark contrast to the previous Cold War. Today, it would seem, Democrats and Republicans are engaged in a contest of who can ‘out-hawk’ the other on Russia.

McCain and Reed set the tone of Tuesday’s hearing by striking a martial note at the outset, and the witnesses, representing the Council of Foreign Relations, the Fletcher School of Diplomacy and the Atlantic Council, were all too happy to pick up where the Senators left off.

The most hawkish of the three, the Atlantic Council’s Ian Brzezinski (perhaps channeling his father Zbigniew), opined that the United States should impose tougher sanctions on Russia in order to “aggressively shock the Russian economy by shutting off its energy and financial sectors from the global economy.” Further, Washington should “provide military equipment to Ukraine, including air defense and anti-tank weapons as well as key enablers, such as drones…”

Most alarmingly, however, was Brzezinski’s recommendation to grant the NATO supreme allied commander the “authorities necessary to deploy in real time against provocative Russian military operations,” thereby taking the decision to go to war with a nuclear armed power out of the hands of the commander in chief and transferring it to the NATO commander in Brussels.

Two days later, as it happened, it was that very NATO commander’s turn before the Armed Services Committee. US Air Force Gen. Philip Breedlove, who, according to a recent article in Der Spiegel is viewed by many European diplomats as a serial exaggerator, told the committee that NATO’s principle concern is a “revanchist Russia” which in his view is a “global, not regional” threat.

Since, in his view, the current lull in the fighting in eastern Ukraine is only allowing Russia to “prepare for another offensive” it would “not make sense to take any of our own options off the table.” Indeed, later on in the hearing, in response to a question from Senator McCain, the general said, “I support the use, um, [quickly correcting himself] the consideration, of offensive military aid …” His referencing of “offensive” weapons raised an eyebrow from Senator Reed who quickly interjected to ask if the general had misspoken. Breedlove confirmed that he had not.

Breedlove’s testimony also inadvertently helped confirm the basis of one of Russia’s principal objections to American policy: that it is being hedged in on all sides by the American military. Breedlove testified about what he called a Russia Strategic Initiative which seeks to coordinate the various combatant commands which border Russia: CENTCOM (US Central Command); EUCOM (US European Command); USNORTHCOM (US Northern Command); USPACOM (US Pacific Command), the better to respond to a future Russian offensive.

Breedlove also praised the US European Command’s Ukraine Joint Initiative which has carried out a series of 25 visits to Ukraine with the goal of helping Kiev identify and address its most urgent military needs. Breedlove also noted that NATO is “war gaming and table topping scenarios” in the event the US decides to arm Ukraine. Should we fail to send military assistance to Ukraine, the General warned, somewhat paradoxically, that “inaction is also an action and the Russians will react to that as well.”

And so, it is hard, given the tenor of the policy discussion on Capitol Hill over the past week, to escape the conclusion that President Obama is under intense pressure—not only from both political parties, but also, disturbingly, from the NATO supreme allied commander—to wade ever deeper into the Ukrainian morass.