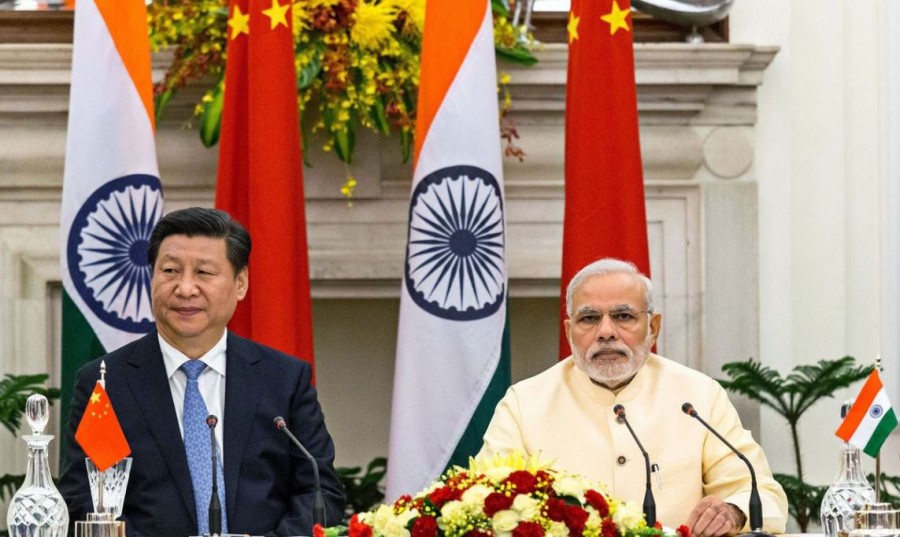 The government resorts to unreal exaggeration to emphasize the real situation, while the reality gets blurred and is often substituted by a visionary fantasy, especially one of happy thoughts, hopes or ambitions.

Nowhere is this more evident than when it comes to Modi’s policies toward China. It’s time to abandon the three-year-old notion that calibrated moves to create irritants in the bilateral relationship will incrementally compel Beijing to negotiate on India’s terms.

The assumptions on which Indian policies toward China have been predicated – the US “pivot to Asia” – have come unstuck. Yet, Modi’s government is unsure how to adjust to the shift in Washington’s Asia strategies under Donald Trump.

There are three four major templates where adjustments are needed. But, fundamentally, India needs to think through a new strategy toward China.

The Modi government gleefully adopted an idea (which was originally handed down by the Obama administration) that India deserved to seek membership of the Nuclear Suppliers Group (NSG) — nations that have agreed to a set of rules to prevent proliferation of materials used to build nuclear weapons.

In all probability, the Obama administration could not have overlooked that China would take a principled opposition to the idea, given India’s refusal to sign the Nuclear Non-Proliferation Treaty.

Again, the Modi government and the Obama administration embarked on a joint venture to get the Pakistani terrorist Masood Azhar included in the UN watchlist. This was even though China’s consent as a veto-holding member of the Security Council would be needed for that, which was unlikely to be forthcoming given the imperatives of China’s own cooperation with the Pakistani military on counter-terrorism.

Modi himself, surprisingly enough, raised both issues – NSG membership and Azhar – with President Xi Jinping in two separate meetings and thereafter Delhi publicized these highly sensitive exchanges that were of a confidential nature. The intention was apparently to corner Beijing.

Meanwhile, a third issue appeared in the nature of India’s opposition to the US$54 billion China-Pakistan Economic Corridor. The Modi government blithely resurrected what had been up until two years ago a mere propaganda plank – namely, India’s notional claim to Pakistan-occupied Kashmir and Gilgit-Baltistan.

The Modi government made it an issue of territorial sovereignty and went on to allege that China had violated Indian sovereignty by implementing the economic corridor.

These irritants and the ensuing steady decline in India-China relations gave a raison d’etre to the pro-US tilt in the Modi government’s foreign policies. The Obama administration happily played along.

The Modi government was confident that under a Hillary Clinton presidency, the US pivot strategy in Asia would get a new cutting edge and that Beijing would eventually have no option but to compromise with India’s tough line.

Incredibly enough, just a fortnight before last November’s US election, the Modi government hosted an unprecedented visit by the then-American ambassador Richard Verma to Tawang in Arunachal Pradesh, the disputed border region with China. Delhi also taunted Beijing by disclosing six months in advance that an official visit by the Dalai Lama to Arunachal Pradesh was also on the cards for April.

Delhi hoisted the petard to signal to Beijing that there was going to be big trouble once Clinton was sworn in as president.

Alas, the calculus has dramatically shifted. Hillary and Verma have gone into retirement. And Trump is jettisoning the pivot strategy and is eagerly planning a meeting with Xi to explore the terms of a brave new Sino-American engagement that boosts his “America First” agenda.

A historic meeting between Trump and Xi that could rewrite the power dynamic in Asia is on the horizon.

To be sure, the Modi government also began a corresponding move to switch to non-belligerent mode vis-à-vis China. Hyperbole of another kind stressing “convergence” with China even where none exists – such as over Afghanistan – has taken over.

But on Friday, the foreign ministry in Beijing drew the red line:

“The Indian side knows very well the seriousness of the Dalai issue and the sensitiveness of the boundary question. Under such circumstances, India’s invitation to the Dalai Lama to the disputed areas between China and India will bring severe damage to peace and stability of the border areas and China-India relations.

“China is firmly opposed to the Dalai Lama’s activities in the disputed areas between China and India and has expressed its concern to the Indian side several times. We urge again the Indian side to honor its commitments on the Tibet-related issues, follow the important agreement between the two sides on the boundary question, refrain from actions that would further complicate the question, not provide a stage for the anti-China separatist activities of the Dalai group, and ensure the sound and steady growth of China-India relationship.”

At the same time, veteran diplomat Dai Bingguo floated a seemingly conciliatory idea that the two countries could be at the “gate” of a final settlement of the border dispute as a whole if only India “takes care of China’s concerns” over Tawang in an overall spirit of “meaningful and mutually acceptable adjustments to their respective positions on the boundary question in order to reach a package settlement.”

How this complex mix pans out remains uncertain. The Dalai Lama could always fall sick and plead inability to travel to Arunachal Pradesh. However, Beijing has thrown the gauntlet at Modi.

Beijing seems to be saying that if Modi is the strong man he claims he is, and can take difficult decisions, why settle for a mere shadow play involving the Dalai Lama? Why not take the bull by its horns and come to the real stuff – the intractable border dispute itself?

Paradoxically, while Modi is indeed a strong man, he is not strong enough to jettison India’s unrealistic, maximalist stance on the border dispute. A “package settlement” demands give-and-take. But if Modi makes concessions, his acolytes in the Hindu nationalist constituency and the Indian security establishment will feel let down.

Simply put, Modi is not strong enough to take bold, visionary decisions. He must, therefore, settle for hyperbole and daydreaming as the stuff of India’s China policy.