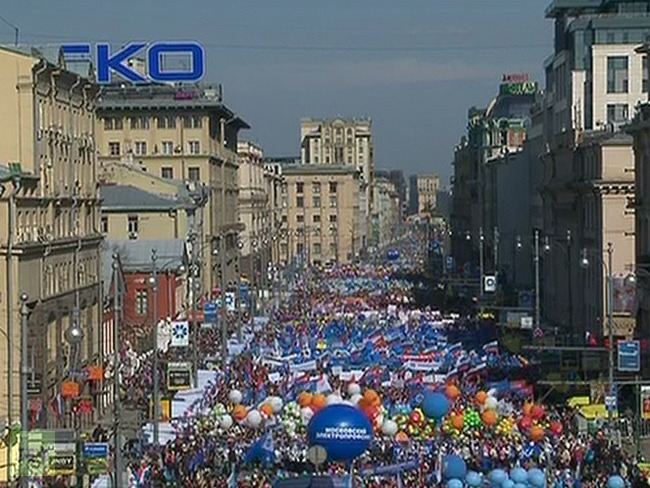 The absence of Western leaders at the celebration of the 70th anniversary of Victory in Moscow on May 9 demonstrates the myopy of the West, according to Italian ex-PM, leader of the «Forza, Italia» party Silvio Berlusconi who published an open letter in Italian Corriera della Sera newspaper. «The tribune in the Red Square, on which beside the Head of the Russian state the leaders of India, China and other Asian countries are sitting is not the indication of the isolation of Russia; it is the evidence of the Western policy failure. I consider the vacant seats not the demonstration of strength, but the symbol of our defeat», Berlusoni wrote.

One can understand his feelings. The leaders of China, India, Egypt, South Africa, Vietnam, Mongolia and many other states came to Moscow on Victory Day. Against this background the absence of those who lead the member states of North Atlantic Alliance became a minor event. It was not as important as Western leaders tried to paint it.

The agenda of the meetings held by Russian President Vladimir Putin with the leaders of 30 states on May 8-9, 2015 – the days the country marked the 70th anniversary of the end of the Second World War – was much more diversified than run-of-the mill diplomatic contacts. They became kind of a symbolic starting point for the process of drastic reform changing the contemporary system of international relations. Suffice it to say that during the Cold War years following the end of the Second World War it was the East, not the West, Asia and Africa, not Europe and the United States, who recognized the decisive role of the USSR in liberation of humanity from the Nazi yoke. Mahendra Bir Bikram Shah Dev, the King of Nepal, visited the Soviet Union in 1958. Before the voyage he had asked to include Stalingrad into the list of places to see. There he said, «The people of Nepal know about the heroic struggle of Soviet Union against fascism and its ultimate victory. Stalingrad will always remain a great symbol of victory over the aggressor.»

Jan Christiaan Smuts, a British Field-Marshall and Prime Minister of the Union of South Africa during the war years, made an interesting remark. He pointed out that the USSR bore the bulk of war effort while the allies dodged shouldering a heavier burden. The troops of South Africa fought the enemy in Ethiopia, North Africa, Sicily and Corsica. The South African Air Force supported the Soviet forces during the Lvov-Sandomierz operation in 1944. South African President Jacob Zuma met the Russian President in Moscow on Victory Day. He said it was important for him to be in Moscow at this time. Greeting the South African guest the Russian leader said, «Relations between Russia and South Africa are of a special nature: this is our leading partner on the African continent.»

During the war and the after-war years the decisive contribution of the Soviet Union into the victory held over fascism was emphasized by Haile Selassie, the Emperor of Ethiopia, William V. S. Tubman, the President of Liberia, Yahya Muhammad Hamid ed-Din, the Imam of Yemen, King Farouk of Egypt, Zahir Shah, the King of Afghanistan, Mohammad Reza Shah Pahlavi, the Shah of Iran. Haile Selassie said the victory over fascism became possible thanks to the decisive role of Soviet peoples and the huge sacrifices they made to achieve the victory over fascism. Shah Mohammad Reza Pahlavi said commemorative words in 1942. According to him, the Red Army had a decisive role in slowing down the pace of advance and then repulsing the fascist push. It defended Iran and many other countries from a potential aggression. It is especially acute because last year Russia and the countries of Asia, Africa and Latin America achieved great progress boosting their comprehensive cooperation. The rapid development of their ties has become a major international trend.

The rapprochement between Russia and China is the process of special significance. Russia and China signed a number of energy, trade and finance deals on May 8 aimed at strengthening economic ties. The two countries have multiple mutual projects which «achieved a unity of views on a wide range of issues.» China’s National Petroleum Corporation (CNPC) signed an agreement on the basic conditions of gas supplies from Russia to China through the Western route. The parties concluded an information security agreement. The landmark became an agreement to join the Eurasian Economic Union with the trans-Eurasian project «Economic line of the Silk Road.» The alliance between Russia and China, according to the chairman of the international affairs committee of the State Duma of the Russian Federation, Alexei Pushkov, is built in response to the expansion of the US and NATO. «The US and NATO lined up the world for themselves for 20 years. In response to the expansion of the western alliance, an alternative alliance is being built by Russia and China,» he told RIA Novosti news agency.